I finally finished setting up Baekdal.com on Facebook, and it is now the official channel in the social networking sphere.

You might think "that was about time" and you are probably right, but... you know... :)

So what is the difference between this site and the Facebook site, besides the obvious that it is on Facebook. Well, two things:

First of all I have added the YouTube Box. And that contains the videos that I have marked as my favorites. Some of these videos will not be featured on Baekdal.com, so look at it as Baekdal+. I am going to do the same with links, once I find a good way to implement that.

Secondly, I am also looking into a better integration with Baekdal.com and Facebook (and the social sphere in general). 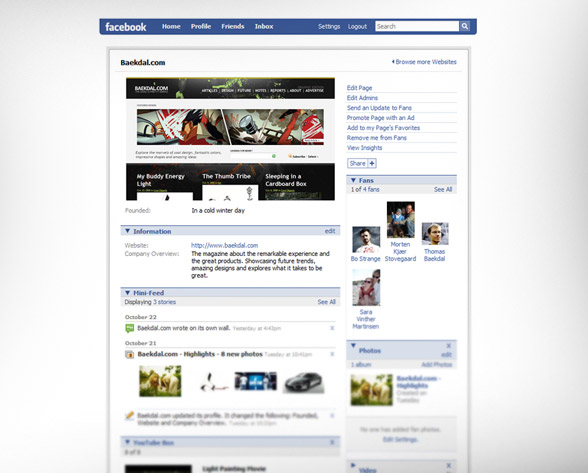 Baekdal.com is still the hub, the place to read the magazine. But Facebook, and the other social networks is the "social glue", and it is here that we can discuss topics, share things and generally interact.

I cannot finish this notice before I explain my change in attitude. In January I wrote lengthy article about why I didn't use Facebook. I saw it as "teenagerish" (not really a word) and as a huge waste of my personal time.

But what I have seen, within the past 6 months, is an incredible change in how people use Facebook - and social networks in general.

In January, 80% of all requests I got from people on Facebook was a complete waste of time. It was things like comparing yourself to a fish, taking the celebrity test, or other useless stuff - instead of having a meaningful social interaction.

I wanted value. I wanted real social interaction and I wanted meaning, not "stuff".

Another problem was that I got a ton of "friend" requests from people who didn't really want to be friends with me, but only wanted to "boost" their own friend count. I didn't want to be a part of that insecure culture.

BUT most of that has changed in the last 6 months. The useless junk is almost gone. I no longer get silly requests to compare myself to a fish. The friend requests are meaningful as well.

And finally, Facebook has also changed from being a waste of time, to a "social movement". It is the place where people gather to protest, to be excited about something and to discuss and interact about meaningful things.

I still have a problem with how Facebook mixes the personal and the public world. I don't like that you have no real control over your personal information. I have two social worlds; one that consists of my family and very close friends, and another that consists of everyone else (the public).

This is still a huge problem on Facebook. You are not in control of your social interactions; you don't have the freedom to decide.

Another thing that Facebook really have to work on is usability. If you happen to notice my Twitter feed last night, I wrote "Damn... Facebook is frustrating. It seems to me that the usability is severely lacking - or maybe I am just getting old."

I was amazed how bad it was. It took me 15 minutes to figure out how to create a page, and it took me even longer to figure out that I couldn't add an RSS feed that actually worked. And, don't even get me started on the problem between Facebook apps and pages.

But all that aside, I have change my attitude towards Facebook. It is no longer a place to waste your time. It is now the place for meaningful social interactions. It is a social movement and you can do things in the social sphere that you simply cannot do on a normal website or blog.