Conference Room Software: Why This Again?

As you may have heard, Google has launched a new meeting software/box, with which you can create instant meetings that you have absolutely no need of:

Chromebox for meetings comes with a blazing-fast Intel Core i7-based Chromebox, a high-definition camera, a combined microphone and speaker unit and a remote control. Set up your entire room in minutes and easily manage all meeting rooms from a web-based management console. All you need is the display in your room, and you're good to go.

I don't get this. Why are so many executives in love with concepts like these? I have seen this so many times. A company I used to work for bought a $30,000 Cisco system that could do the same thing.

You don't need it because you already have something that is much better (at zero extra cost).

Take a look at this press picture from Google's solution:

Here we have a meeting involving seven people. Three of them are sitting in a meeting room behind a somewhat expensive meeting system, with a camera that doesn't point to anyone in particular.

The other four people are sitting somewhere else. This could be at home, at their desk, at a coffee shop, or even in another meeting room, using nothing but their own personal laptops or tablets. And, with a camera pointing directly at them so that you can see them up front and personal.

If the four people (who are not in the meeting room) can have a meeting like this just fine, why do the three remaining people need a special meeting box, TV and software?

I just don't get this.

Wouldn't it be better if people simply used their own devices? Each person would then face their own camera directly. You would be easily able to see everyone's facial expressions. You can quickly share your screen to show what you have on your computer (which these people at the meeting room can't), and you have the freedom to have your meeting from anywhere at anytime.

And if you then need to show people a whiteboard or something similar, just bring in another laptop and place it on a table in front of it. Better yet, use a digital whiteboard and just share the screen.

Mind you, I'm not arguing against the meetings themselves, or getting people together or the concept of face-to-face interactions.

What I'm simply saying is that everyone already has a laptop with a HD camera built right in. And when you use that, Google Hangout will show your face up-front and personal regardless if you are in a meeting room or somewhere else.

It's a much more better experience.

Why would you limit your view to a camera that is distanced from the people you are communicating with, in a room that is limited in both place and time? Why not just have a meeting wherever you are, with whomever you choose?

This is a concept from the old world of desktop computing, during which the only way to connect was to go to a specific place.

It's the same thing that I argue against in relation to newspapers. Many newspapers believe that rearranging people's desks is how you make them more connected.

This is what 'connected' is all about: 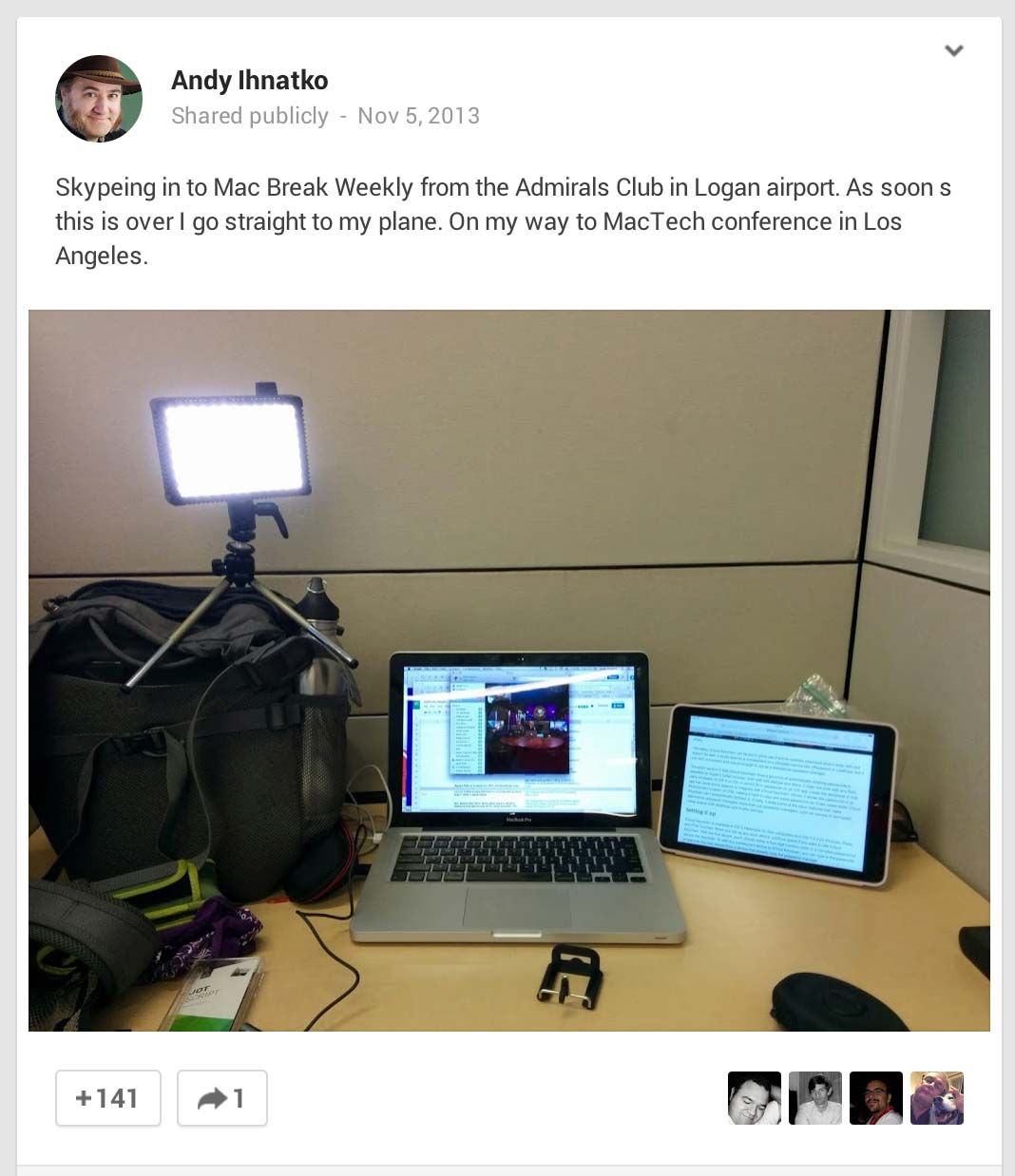 Another equally puzzling system that managers seem to like, is 'Double'. Here is how it works:

Again, I just don't get this.

The idea is that a manager can sit at home, and call up this thing, which he would then have to drive down the hall, through doors, and around people, until he finally reach the person he wants to talk with.

Why not just do a hangout directly with the person using the web camera that is already built into his computer?

It's a concept based on the old world where the only way to communicate with other people would be to physically move to where they are. Why would you spend half your time trying to drive this thing around, when you could just do a Hangout/Skype with people directly?

Mind you, there are many other uses for a drivable camera that could be extremely interesting. One example is a time-shifted museum. Imagine that you are living in San Francisco and you hear about a new exhibition at the Porsche museum in Germany.

That's almost half-way around the world, and in a completely different time zone. When it's 7 PM in Germany, it's only 10 AM in San Francisco.

So the Porsche Museum could deploy drivable HD cameras that people could drive around while the museum is closed (i.e. during the evening and nights in Germany, when it's daytime in the US and Asia).

You simply call one of these devices (for maybe $5), and then you can lean back and have your own controllable virtual reality tour of the real place, using real cameras.

That would be awesome! ... and everyone wins.

But for meetings, it's the most ridiculous thing ever invented :)