Note: This story was originally part of the Baekdal Plus newsletter. If you want more like this, add your email to the list.

I want to talk about a problem that we have with social channels and how we bring news to them.

Several months ago, I created an episode for my podcast about news avoidance and news fatigue. In it, I explained what I experienced when I tried not reading the news at all for an entire month (yes, I know, crazytalk :))

This experience changed the way I look at the news, but also the way I look at media consumption in general, and I have come to the conclusion that the way we consume media today is not healthy. The problem is that we are constantly on edge, because we never know when something bad will come our way.

Let me explain what I mean by this.

In the old days, before the internet, the public consumed media in very defined media moments, where the moment and focus of the media was aligned.

For instance, in the morning, you might look at the morning newspapers. This was a news moment, so you were expecting and mentally prepared to see something negative (because that is what newspapers often focus on).

But then later you might sit down with your favorite magazine, maybe it was a sailing magazine, and so you would have a focused moment around yachts, sailing and other such delightfulness.

Then in the evening, you would sit down to watch a movie or a TV show, and the type of movie you chose to watch defined what moment it was. So, if you sat down to watch Groundhog Day, you had a comedy moment, and if you instead decided to watch Alien, you had a horror moment. And both of them would be enjoyable, because you are mentally prepared for it. You knew that you were about to see a horror movie, so while it would be scary, you were not emotionally worried about it.

In other words, in the old days, we defined what type of moment we wanted to have in advance!

But in the digital world we have completely lost this concept, and Twitter is one of the worst examples. On Twitter, you never know what you are going to see next. One second you see a funny tweet from Kitten Academy, and the next you see a tweet about someone dying after their release from one of the US concentration camps for refugees. 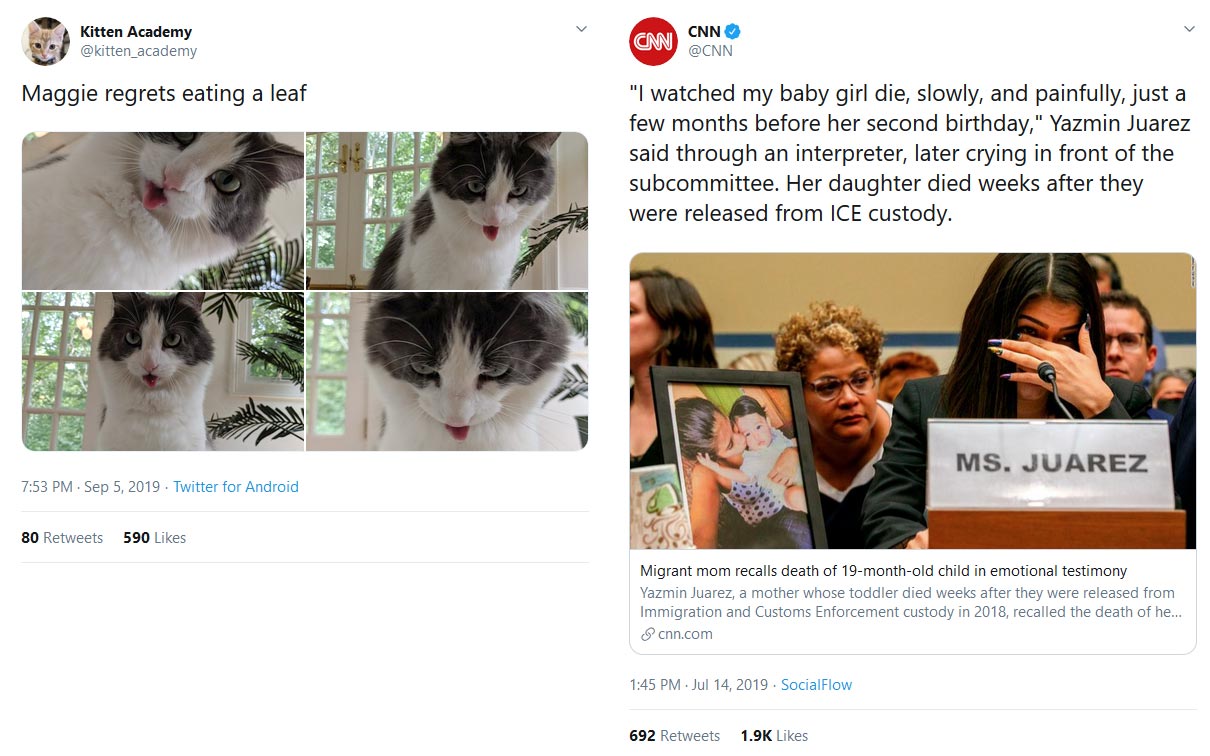 In fact, I just forced you to have this exact type of moment (and my apologies for doing that). Here you were just having a good time reading a newsletter, but then I forced the tweet above into your face.

How did that make you feel? Do you now feel more uneasy, more outraged, more on edge?

When you start thinking about this, it's terrible in every way,

Imagine if, at any time and regardless of what you were doing, someone could come up to you and scare you. How would that make you feel?

It's not a surprise that people feel the world is getting worse, even though it isn't. We have created a form of communication where constantly being on edge is the new normal.

And I worry what this is doing to us, to the public as a whole, to our democracies where people are increasingly voting based on outrage and fear, and to the way people interact with the world.

But, of course, Twitter isn't the only one doing this. In fact, most of the 'outrage tweets' that people see (like the one from CNN above) are media related.

And we also do this outside of social media. Here I'm thinking about notifications (screenshot from here). 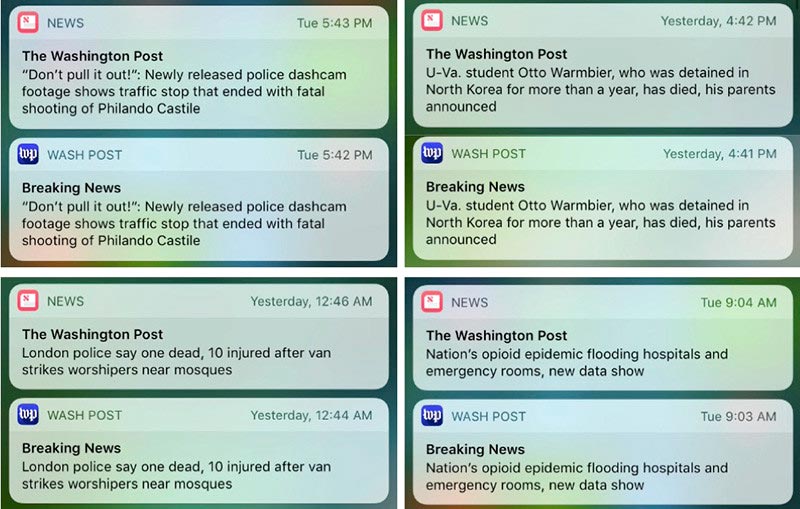 Here we are doing the exact same thing as Twitter. People are just minding their own business, having fun, doing work, watching TV, exercising, playing with their kids ... but at any second, you might send them a notification that tells them something awful about the world.

This is why I call this drive-by awfulness. You are just having your own moment, and then ... BANG!! ... now you feel terrible and outraged about something you can't even do anything about.

It's just terrible, because it means that people are no longer reading the news within a defined moment of news learning. Instead, it has become an outrage machine, based on news snacking, that is emotionally and psychologically putting you constantly on edge.

As I said in the beginning, I became much more aware of this problem after my experiment with news fatigue and avoidance. Because this is what that trend is really all about.

When people choose to avoid the news, it's not because they don't care about it. It's because we have turned it into something that isn't useful. We are not giving people a defined moment of news value.

And I worry about this. I think we are losing one of the most important elements of news, and from a trend perspective, we are seeing an increasing number of people who choose to not subscribe to news at all because of it.

It's time for us to change this.

Note: This story was originally part of the Baekdal Plus newsletter. If you want more like this, add your email to the list.