Duracell Just Keeps Going, Even During a Hurricane

Big companies usually fail when it comes to understanding their market, but Duracell is the exception of how you truly connect with your market.

Yesterday I wrote about the failure of American Apparel and Gap as they tried to capitalize on the Hurricane Sandy. Each running various forms of advertising to promote their store. It was yet another example of how big companies are out of touch with what's going on around them. They only think of themselves and, in cases of a crisis, that kind of behavior can be truly damaging for your brand.

I wrote, "In case of a crisis, you focus on giving instead of taking." And I used the example of a coffee shop making free coffee for those hard at work cleaning up all the damage.

But It's easy to come up with ways small local businesses can help and have a lasting impact on their local communities. They are already there, and they are just as affected as anyone else. It's much harder for big corporations. The very culture of most corporations is that their marketing team is several steps away from the customers. As a big corporation, you only know what the customers wants because you hire expensive research firms to do a market study.

So when a big disaster like the Hurricane Sandy strikes. They have no clue as to what that actually means. We see this clearly when American Apparel advertised "If you are feeling bored by the storm, get 20% off for the next 36 hours" and then targeted it to the areas hit by the hurricane.

But people are not bored. People are scared about their future. They are hard at work repairing damage, removing fallen trees, pumping out water from their basements, and looking through their belongings to see how much can be saved. On top of that, varies resources, like petrol for their home generators are running out of fuel.

Well, my worst fear came true during Hurricane Sandy. Two of the giant trees in my backyard fell on my house last night.

No one was hurt, although, the second tree came close to hitting the window near where we were sleeping in the basement. Now, we're surveying the damages and trying to figure out how to get the tree off the house with light machines since they can't get the giant crane truck into our yard.

It's gonna be a long week. 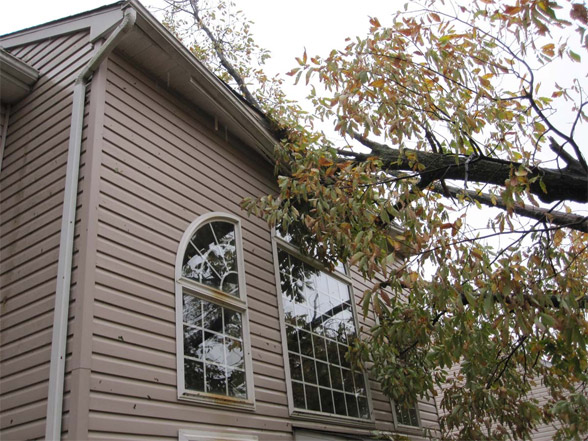 And on top of this, millions are without power. That's means, no computer, no smartphone, no iPad... no nothing. They are completely disconnected. They can't call their families to keep them up-to-date with what's going on. They can't check news sources online to see how things are in other places, they can't go online to see if the buses or trains are still running. The one thing that people value the most, the ability to connect, is gone.

And American Apparel asked them: "Are you feeling bored?"

You know why they did this? It's because American Apparel's office is located far away, and their marketing team has been reading the same news reports over and over again... and that's kind of boring. So if the marketing team is bored, so must everyone else... right?

Wrong ... and that's why they fail. They are simply too many steps away from their customers. And the result is a culture where the marketing team never thinks about anything outside their optimized market research studies.

But there are companies who do make a difference. Before and during the storm, Google stepped in with their excellent Hurricane tracker, and today, if you search anything related to Hurricane Sandy, Google is displaying links to all the information you need at the very top of the page.

But none of this is any good unless you can go online. As we all know, millions are without power. And this is where another huge company is stepping in to help. Duracell.

So Monday, they sent out their Rapid Responder Truck, bringing along a ton of batteries and recharging stations. As well as posting helpful guides on their Facebook page for how to help people extend the battery life of their devices. 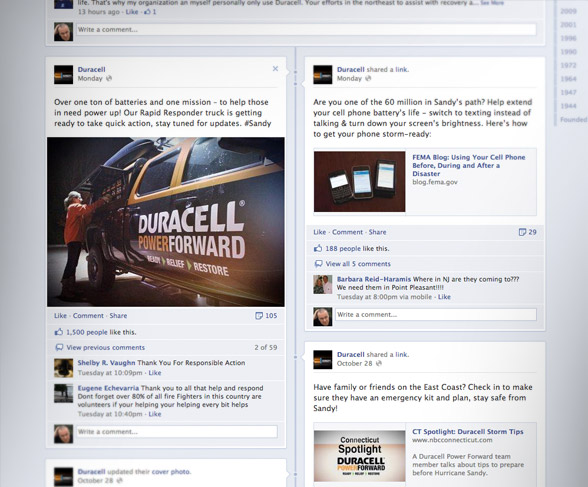 Hey New York: You can find the Rapid Responder at Battery Place & West Street 'til 8pm, we'll be in New Jersey tomorrow to help folks recharge & reconnect. Check back for updates. #Sandy #PowerForward

But because of the size of this disaster, it quickly became apparent that one truck wasn't enough. So they are now sending out another much bigger truck, to help people charge their phones, and also with computers allowing people to go online and connect. Saying: We hear you and we know you need more help. We are on our way! 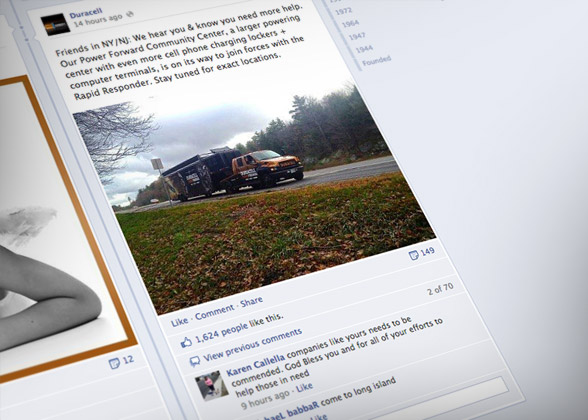 And just go to their Facebook page and read through the comments. They are more positive than anything you will find on any other brand page.

As I wrote yesterday: "In a crisis: You give!" ... and that's exactly what Duracell is doing ...and they do it every time. Here is a video from another storm:

The difference between this and what American Apparel did, is that Duracal didn't turn to market research studies to figure out what people need. Duracell asked themselves, "If we were in this situation, how would I feel ... what would I need?" "And is there something in relation to what we do, that we can use to help?"

In the case of American Apparel, they could have provided blankets, or (cheap) wool gloves and hats. A cheap pair of wool gloves is just $0.2 per piece (when produced in bulk). That's cheaper than any advertising campaign.

They could have provided free wi-fi from all their stores. ... or they could just have done nothing, and that would have been okay too.

People will remember what you do, and why you do.