Experts and Journalism: Do We Need a Rethink?

The news media has always loved using 'experts', and there are experts about pretty much anything. But all too often, these experts are not experts. They are just people who happen to have read the same news stories as the rest of us.

The media's use of experts can be categorized like this:

Sadly though, most 'experts' are either fake, pundit, or just mouthpieces. Just look at CNN or Fox news. They use experts who don't actually contribute anything to the story. They are just filling in the void of not having anything useful to report.

It reminds me of what Jeff Jarvis posted about the problem with TV news. Specifically, he wrote about how they send out their journalists to stand on a bridge somewhere long after the event is over, just so they can be 'reporting from the scene'.

There is no reporting to be done at the bridge. None. There are no officials there. There are no sources to be found. The victims are long gone. So TV news wastes a reporter's time and a crew's time and the use of expensive equipment going to the bridge, standing there for an hour or more, where there is nothing happening, nothing to report. Why? Because TV thinks it must have video, style over substance, image über alles.

The stand-up has zero journalistic value. It wastes time. It wastes precious reportorial resource. It turns the world into a mere backdrop for entertainment. It's a fake.

I agree wholeheartedly with Jeff on this. The amount of money, time and resources that TV news put into sending people to places that has little relevance to the story is just incredible. And it's the same story when news media are using experts. It's just noise.

But I want to expand a bit on this.

Earlier this year, a journalist from one of the largest TV news stations in my country called me to do an interview about in-app purchases. And he wanted me to come to the studio to do a segment about it.

Much to his surprise, I said: "Sorry, I will gladly answer the questions you have right now, but I don't have time to come to the studio."

You know: CBE = Can't be everywhere / CDE = Can't do everything.

By saying no, of course, I also put him in the very awkward position that he no longer had a story. And he started asking me if I knew other people who could say the same things I would say.

This is something I have never really understood about TV news and journalism in general. There is this notion that journalists cannot be the creator of news. Instead, they have to bring in other people who can create the stories for them.

This particular journalist sounded like he was a very intelligent person. He clearly had the right story. He already knew what to look at, and he had a plan for how it should be presented. But when I declined to show up in the studio, he couldn't bring the story. Why is that?

It's a strange culture. Most journalists I know are very smart people, but they are not allowed to actually act on that because they always have to bring in experts to take the glory.

You don't need the experts. You already know all there is to know. As a journalist, you are being exposed to so much information every day that you probably have a better picture of what is going on than those you are interviewing.

It's same thing about Walt Mossberg, Kara Swisher from Re/code. We follow them because they are not just interviewers, they are the experts and we value their opinions as much (and sometimes more) than the people they talk with.

Why can't we do the same with news?

Why is the news format limited to journalist playing the role of being the bringers of news. A role where they rely entirely on outside interviews, even when they already know all there is to know themselves.

Wouldn't it be better if we turned to news because we wanted to get insights from the journalists themselves? Journalists are very intelligent people, so why are you not allowed to use your insight?

And before you start to argue that it's because you have to stay objective, we all know that's bullshit. When a journalist goes out to write a story, they do so with a very specific objective of what that story should be about.

I see this all the time when journalists call me for an interview. They are not really interested in a real analysis, they want me to be outraged and have an 'expert opinion' that neatly fits the story. Same thing when some of my journalist friends are asking their network "do you know anyone who has this particular problem I could interview?"

That's not objective, and we all know it.

Instead, what's happening here is that journalists are using experts to avoid taking ownership and being responsible for their stories. If someone objects, they can just point the finger at the expert instead.

It's kind of a neat trick for journalist on one hand to direct the news, while not having to be accountable for its outcome.

But in the connected world, people generally don't connect or engage with people 'behind the scenes'. Instead, we connect with those who have the courage to stand behind their stories, and the ones that create those stories.

Just look at a simple metric of followers on social media. The most popular and influential journalists are all people who are the experts themselves. And they are the real experts.

We see sites like Nate Silver's wonderful site FiveThirtyEight and Mona Chalabi. She is the lead journalist for the DataLab section. And a feature she is doing is to answer readers' questions through journalism. One recent example is an excellent story about gender bias. 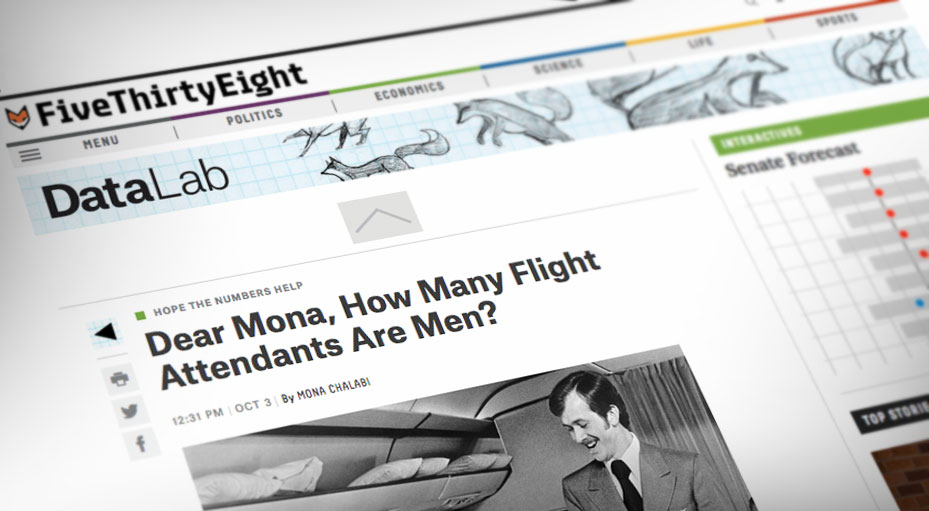 Instead of going out and just finding random experts to provide often uninformed opinions on the topic. She is the one who digs up the real numbers. Sure, she is still relying on outside studies. But she is the 'data expert' that converts these numbers into real insight.

Okay, so the form may sound a bit cheesy with the whole "Dear Mona" headline, but the concept is brilliant. It's personal, connected, engaged, and it positions not just Mona but also FiveThirtyEight as a go to site for real insight.

Arguably, FiveThirtyEight's scope is in a weird zone, in which they mostly appeal to political and sport analysts and crazy data geeks like me. But the concept of how they 'are the experts themselves' is something you could easily translate into any other area of news.