Forcing Google to Pay For Links to Old Media?

You have probably heard about the new legislation that is being proposed in Germany in which a bunch of old newspapers have lobbied the Government to impose a link tax. Or rather they want to force Google and other aggregators to pay a license fee if they show a headline of an article with the link in their search results. And now the French wants to do the same.

I had decided not to comment on this because the whole idea is just too silly, but too many of my friends in my publishing circles are actually thinking this might be a good idea.

What would the digital natives do?

One of the big problems with old media is that they simply do not understand the digital world. In the old world, content is being republished, and the act of republishing disconnect the reader from the source.

So, it's entirely reasonable to ask other newspapers to pay a license fee to reprint stories ...including shorter excerpts, because again, the old world disconnect people from the original story.

The digital world, of course, doesn't work that way. In fact, it's exactly the opposite. In the digital world republishing is seen as a bad practice because you never want to disconnect people. You want to maintain the connection and then enhance it with relevance and convenience.

And this is where the link comes in. It does exactly the opposite of the old news services. It doesn't take news, disconnect the audience, and then give it to others. It facilitates a connection back to the original article.

The old newspapers simply do not understand this simple concept. They still live in a world where there is only publishing and syndicated republishing. The link is neither of those.

A simple way to look at this is just to observe the actions of the digital natives. How do you think a sites like Huffington Post, Mashable, Techcrunch, The Verge, Gawker, and many others managed to become so big?

Did they do it by trying to prevent people from linking and asking Google to pay a license fee?

So when we look at the digital natives, having others link to them is their most important asset.

For instance, take a look at MediaGazer or Techmeme, which are news aggregation sites that take the headline and intro text to articles around the web and use that to create a site with the most important headlines.

The old media hate this because they say they are stealing their traffic. These are the type of sites that the old media want to either shutdown or force into paying a license fee. They say sites like Mediagazer is profiting on their content (which is true).

But then look at the behavior of the digital natives. When someone at GigaOm, The Next Web, or The Verge writes an article, they alert Mediagazer themselves.

Here is a tweet from Matthew Panzarino, one of the editors from The Next Web.

Note: When you add "Tip @Techmeme" to a tweet, Techmeme will credit you if it's posted.

The old media simply do not understand what is going on here. The digital natives are not just accepting but also actively embracing link aggregators. They know the power of the link.

It makes no sense to try and block it, or ask Techmeme or Google to pay a fee. The digital natives want them to link to them, because that what's helps them grow.

And we only have to look at the economics to see which strategy is the best one. The old media are in decline while the digital natives are skyrocketing.

Another problem with this is the old media still believe that the world couldn't exist without them, including Google.

A couple of weeks ago, I wrote: "Note to publishers: If you think Google is evil for linking to you, change your robot.txt file ...but wait, you want that free traffic?"

They think that with these laws they can force Google to give them both a lot of free exposure and traffic, and get them to pay a licence fee for the 'privileges'. What they don't realize is that Google doesn't need them.

If this law is enacted, Google (and the other news aggregators) will simply drop them from the search listings, and people wouldn't know the difference. The old media no longer have the monopoly of news. In fact, its role is tiny compared to all the other sources out there.

And deep down, the old media know this, because otherwise they would already be be blocking Google for linking to them.

BTW: I also wrote about this in "We Can Save Newspapers by Destroying The Web"

The third problem is more profound. The proposed law defines media companies as ...well.. the old establish media. A definition that no longer makes any sense to use.

But what about Facebook, Twitter, and Google+? Should Facebook be forced to pay old media companies whenever a person posts a link on their personal profiles? Or what if Coca Cola links to an article on the New York Times on their Twitter profile? Should Twitter pay the media company for that?

What if a person create a summary of an event over at Storify, should Storify be forced to pay a license fee to each old media company their users link to?

This law has nothing to do with the world we live in today. This is purely old media protectionism. It doesn't scale, nor does it even make sense once we look beyond the outdated definitions.

We now live in the connected world, and everyone is linking to anyone. Including the newspapers (at least I hope they do when they reference other people's content).

It's the same when we look at the other end, the ones who receive the money. Who should get paid? Only the media companies who used to do print? ...or anyone who publishes online?

Again, it doesn't scale because the entire concept is based on the idea that these old media companies are unique. So if a German newspaper writes a story about a golf tournament, it's suddenly special and should be licensed. But if a blogger wrote the story it isn't.

In fact, with this law, shouldn't the newspapers also be required to pay a license fee to Google when they quote and link to something on Google's blog? Why should Google pay newspapers for linking to them, if the newspaper are free to link to Google without paying anything?

Here, for instance, is a page from the Guardian incorporating bookmarks to other sites as part of their local coverage. Why should only Google pay for linking to other sites? Shouldn't the Guardian pay a license fee to every single one of those sites as well? 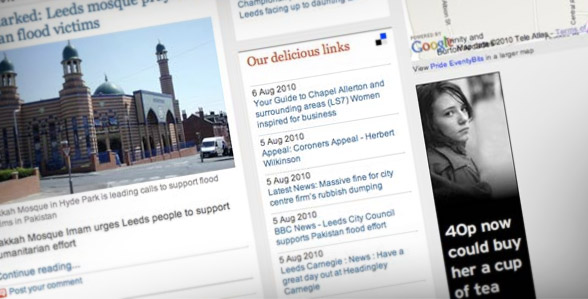 We see the same problem with all these new proposed media laws. In Australia, one politician suggested that media companies should be prevented from publishing (for a time) if they deliberately told a lie.

Now, I agree that they are many problems with deceptive media reporting, but why should this only apply to the media. What about bloggers? What about posting something on a Facebook page?

Why doesn't the law include those channels as well? The answer is simply that the old media people still believe they have the monopoly over the 'media' output in the world. Something that is simply no longer true.

In the connected world, everyone can be a journalist ...and everyone is.

Enacting laws that define the media as it was in the 1980s helps none. If we are to create new media laws, at least base them on the media world as it exists today.

For instance, in "We Can Save Newspapers by Destroying The Web" I suggested that any site should be allowed to implement a content ruleset for linking, quoting, republishing, and aggregating, and allow the old media people to block the connected world as much as they wanted.

But it wouldn't hurt the connected world, because we could just implement it like this:

This would solve the problem ...but as I wrote in that article: "Of course, I hope we do not have to go this far. It's a bit extreme to pass a new copyright law to show the old media that it would just kill them faster..."