Google Glasses and the Technopanic

Want to see what Technofobia looks like? Or what +Jeff Jarvis calls technopanic:

If you were nodding and agreeing with these points, you also suffer from Technopanic. Get help, please!

The problem with crap like this is that it's all made-up-pundit-speculation, which could just as easily be the opposite.

Take item 34, "It will make driving dangerous" ... wouldn't it actually make driving safer because we can keep our eyes on the road? Would it help us navigate and notice other cars because Google glasses could alert us of dangers ahead? Couldn't it be used to help us keep a safe distance to other cars, or detect of a child is about to step out in front of us? Or wouldn't it help us by alerting us if we are driving to fast but haven't noticed it?

Or take item 22, "It will create more cyberbullying and stress." ... but wouldn't it do the exact opposite. I mean, it's pretty hard to get away with bullying if the person you are bullying can record and share it with the school's principal. And wouldn't it help us to alleviate stress, by automatically taking care of things that we otherwise would have to worry about? For instance, you open your refrigerator and say "Glass, buy milk, avocados some salad, and eggs." ...or you show up at a meeting, and you have suddenly forgotten what the client's name is... but then Google glasses shows you her name.

People have a tendency to do pretty nasty things when they can hide behind the covers of anonymity ... just look at the many blog comments. But if we can record when someone is doing something bad, wouldn't that encourage people to think about the consequences of their actions first?

Or take item 23, "It could make you more willing to believe lies." ... but wouldn't Google glasses instead show us a list of author-ranked articles about it, through which you can immediately learn what the true story is? Imagine that you are watching a politician telling a lie, but because you are also following the event as a social stream, you immediately notice people pointing out when something isn't true.

I'm not saying Google Glasses is perfect, but there is an astonishing amount of technopanic in the world today. And just like how the newspapers are filled with negative stories, the real world is actually pretty safe, pretty comfortable and filled with mostly very nice people.

We all have a choice in life. We can decide to be afraid of change and spend all our time trying to come up with excuses for sticking with the status quo. Or we can instead spend our time trying to make the future better than the past.

Yes, that does imply a change ... and we may have to redefine the concept of privacy. But the privacy discussion we have today are mostly the result of looking at the wrong things.

For instance, the new theme is 'Ban Google Glasses Stickers". 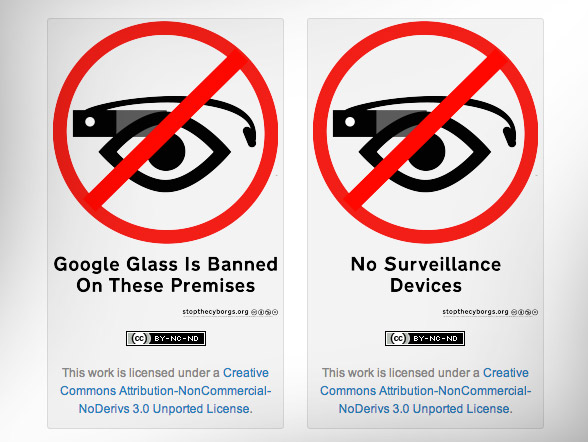 Think of this for a moment. What if, in 100 years from now, medical scientists will be able to scan your brain and play back any memory you have, what would we do then?

Would we ban people from entering the same room because our brains will remember what other people were doing? Would we require everyone who is walking around in public to wear a blind fold and noise canceling headphones?

What then? Should we ban people's brains?

We are not focusing on solving the right problem. The problem is the culture of not respecting other people's personal spaces. For instance, when Kate Middleton went on vacation at a private house, a paparazzi photographer decided to use a high-powered zoom lens to snap a picture of her topless.

Should we then ban zoom lenses? No, of course not. Because most people use zoom lenses to take wonderful positive pictures every single day.

What we should act against is, not the tool, but the culture of disrespect. It was the paparazzi who violated Kate's privacy... not the zoom lens.

Solve the real problem! But most of all. Don't become another techopanic pundit.