How Much Battery Do Media Sites Use?

Now for something completely different. I have been struggling with the battery in my MacBook Pro for a while. Apple promises 8 hours of wireless web surfing, but I barely get 3. And I have tried everything. I just cannot nail down what is using all that energy.

One culprit is Google Chrome, which appears to be using 2-3 times as much energy than Safari (but I really like Chrome). So it got me thinking:

How much energy does it take to browse the web? And how much does that differ between sites? And are some sites energy hogs?

So, in a moment of procrastination, I decided to test it.

I looked a random selection of media sites, combined with a few Tumblr sites, a site full of animated GIFS, the social sites we all use, and web based tools like Google Docs and Evernote. And, just to get a baseline, I decided to compare this against Photoshop (doing image color adjustment), and Apple Numbers.

The last one is interesting, because it should be zero (or close to it). But since most sites these days are using real-time monitoring tools, most sites are actually continuously processing data.

So here we go:

First, we look at the peak energy use while loading (shorter is better): 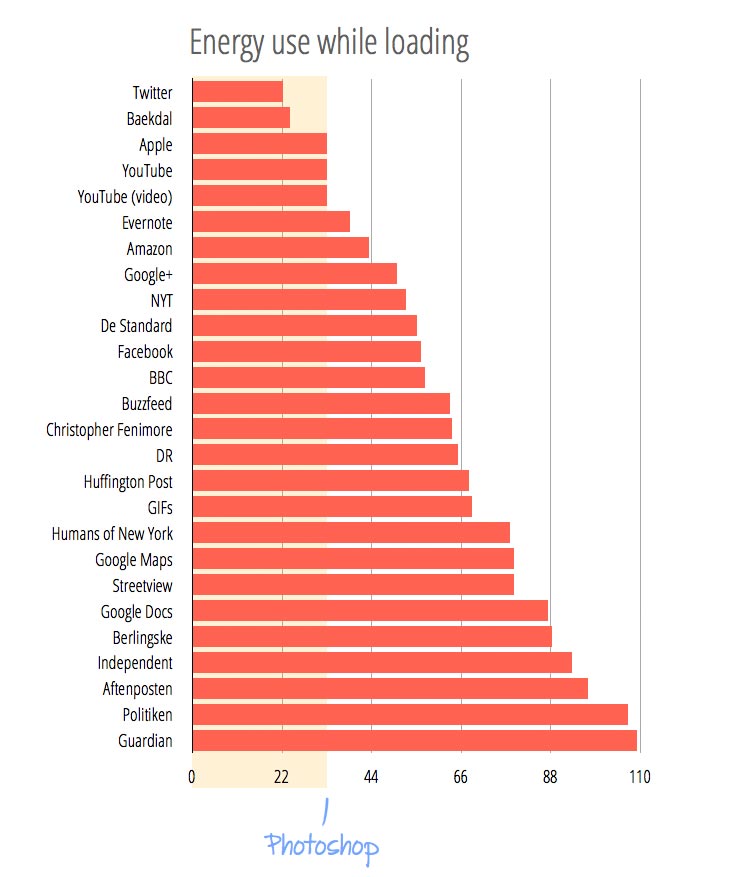 I'm happy to report that this site uses almost no energy. Almost as little as Twitter. The Guardian, however, peaks almost 4 times higher than when you start Photoshop.

And this is important, because most of us are just using Twitter, in which we click on any link that might interest us. And each time you do that, the page has to load, and that load time takes up a hideous amount of energy.

Obviously, the defining factor here is how fast it loads. It doesn't matter if the Guardian uses a lot of energy to load the page if it can do it extremely fast. But the Guardian is not only energy intensive, it is also very slow to load compared to the other sites I tested (partly because it is loading a staggering 306 files per page).

But loading, of course, is usually fairly fast, so let's instead look at the energy use when reading or using a page. I measured this by watching the average energy usage while I was scrolling down the page: (shorter is better) 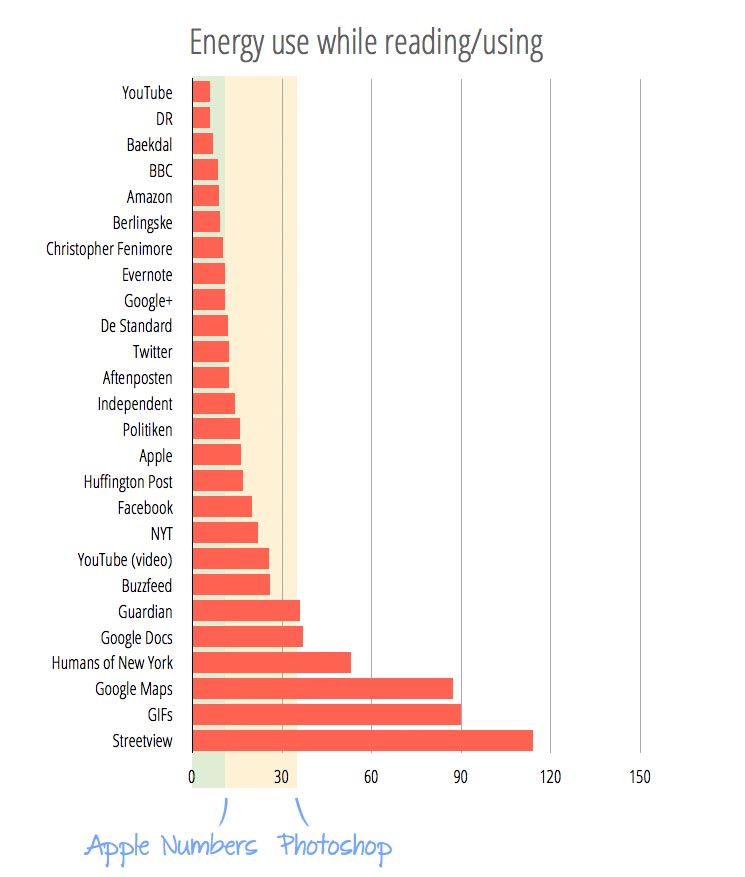 Many newspapers did fairly well here, but it was still surprising that reading an article in, for instance, De Standard (Belgium) uses as much energy as working on a spreadsheet.

Again, the Guardian didn't do so well. It uses as much energy while scrolling than it would take to manipulate an image in Photoshop. That's just crazy.

Also notice YouTube. There are two of them in the list, one for just YouTube itself, the other for watching a video. But both Buzzfeed and the Guardian uses more energy while scrolling down the page than watching a YouTube video. The only ones doing worse are Google Maps/Streetview, watching GIFs, and the Tumblr blog Humans of New York.

I like the Guardian. It's great newspaper, and it doesn't feel heavy or slow to use. But the energy use is just insane.

Finally, I looked at how much energy a site uses when it's just idling. You know how it is. We have the browser loaded with something in the background while we are working on something else. We all do that, all the time.

And the result was this (note the 1/10 X scale compared to reading): 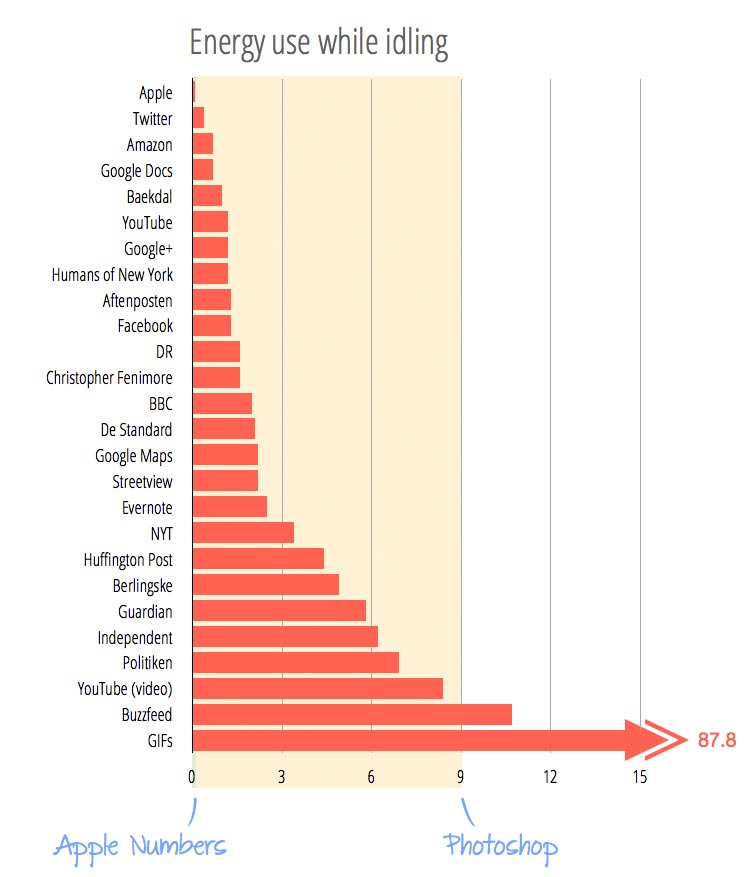 The worst site to have idling is one filled with animated GIFs. As you can see here, the energy usage while idling is the same as when scrolling. This is because animated GIFs never stop animating, so it's like having a video constantly playing in the background.

Don't do that if you are on battery :)

But it makes one wonder about our social channels. I always have Twitter, Google+ and Facebook open in my browser, even when I'm working on battery. But if some of those posts contain animated GIFs, the energy is going to be horrendous.

And we see this on Buzzfeed, which often use animated GIFs. It actually uses more energy just idling than Photoshop. How crazy is that?

One site that did surprise me though was Apple. Apple's website feels so slow and cumbersome, just look at the iPad Air page. But in terms of energy use, Apple is one of the most optimized sites of all, and that's despite its very heavy use of animation and effects. That's truly stunning, and it all comes down to smart development and heavy use of hardware accelerated webkit functions.

Another thing I tested was AdBlock and ClicktoFlash (disables Flash), but the results were mixed. Some sites dropped their energy use by more than half, while it made practically no difference with others. The Guardian, for instance, only used 8% less energy with flash and ads blocked.

But obviously, if you have a site that has a ton of very heavy flash based ads, it's going to make a big difference. As in, a really big difference!

I knew that using the browser can be a bit problematic in terms of battery use, but I did not expect some sites to perform worse than using Photoshop. That's just insane.

And it ties back to something I wrote about over Google+ back in March. It's so easy for media sites to just add functionality. But you also quickly put your site in a situation where it doesn't feel nice to use.

One example was when I tested an article in a Danish newspaper: The article itself was 2,072 characters / 328 words long, but the javascript code was:

That is just crazy. In comparison, Harry Potter and the Philosopher's Stone is 76,944 words long. Meaning that each time you click on just that one article, your browser loads up more code behind the scenes than a full Harry Potter book.

And just to illustrate the difference: When writing in iA Writer, the energy use is almost 8 times less than what it takes to write using Google Docs in Chrome (which is what I usually do).

So by closing my browser and only working in iA writer, I could extend my battery with 1.5 hours more than what I usually get out of it. Still nowhere close to what I'm supposed to get out of my MacBook, but that's quite a difference.

Anyway, I will stop being geeky and go back to writing about how the media is changing :)