How Much Money? No Way!

It seems we narrowly avoided having the USA go bankrupt. The politicians have now agreed to loan themselves even more money. It is the same story in many other countries. The cost of running a country is rapidly growing out of proportion with reality.

We see this all the time with Governments, but it is also a problem within many big companies. There is this idea that big business equals having to spend big money. If you are Government, you apparently have to choose the most expensive solution. And if you are an enterprise, you have to choose enterprise level solutions.

Let me give you three examples on a much smaller scale:

I live in a small city with just 50,000+ people, and we have bridge spanning a stretch of water in front of the harbor. It is about a mile long. Over the years there has been a problem that high winds caused big-rigs or trucks with high loads to crash. 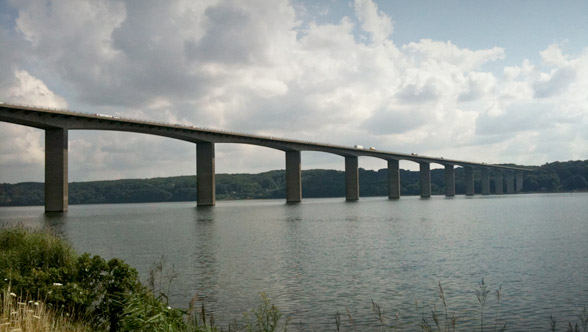 The city council has now come up with a plan. They want to put up a 6 1/2 ft barrier made of clear plexiglass, providing the needed protection without limiting the view.

It is a good idea, but here comes the problem. The city council has announced that they plan to spend $12 million on this - before even asking any contractor for a quote.

That is just stupid. You do not reveal what you expect to spend before asking for a quote. They can be certain that the cost is going to be exactly $12 million + about 30% in extra unpredictable expenses.

But this is only half the problem. Why $12 million?

I looked up two plexiglass providers and found that I could buy 1 inch thick, 6 1/2 ft high plexiglass, with enough sheets to span the one mile bridge both ways - for just $1 million. And that is without the huge discount the city would probably get for buying it by the ton.

Total price: $2.5 million - or roughly a fifth of the budget.

Back in 2007, the city of Copenhagen (the capital of Denmark) noticed this social thing starting out in the US called Facebook, and wanted to create a social network for the people in Copenhagen.

We can all discuss the insanity of this idea. Why would people limit their social interaction to only the ones within the same city instead interacting with their friends, regardless of where they live?

But the worst part was the price. The illustration below shows what they spent in the two and a half years it existed. 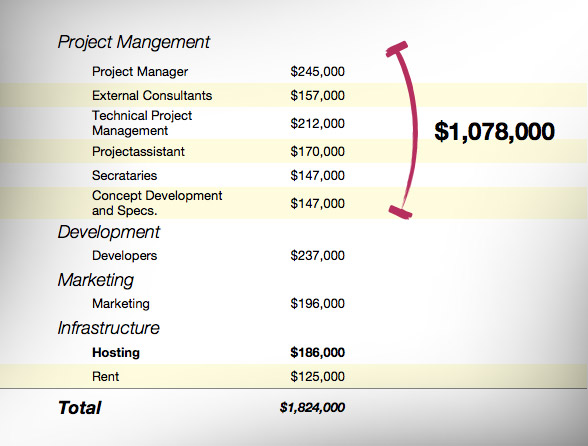 First, it is clear from the budget that they had no idea what they were doing. So, they tried to make up for it by having a lot of meetings. They spend 4 times as much on project management than on creating the site.

In comparison, this site is hosted at Rackspace. My server can probably handle a thousand times the traffic, and it costs me about $85/month. ...or to put it in another way. I could host their site for 182 years for that kind of money.

Ironically, last year during the COP16 (World Climate Summit), they did it again. The City of Copenhagen decided to create a social network just for COP. A site that also flopped and is now closed.

A couple of years ago I was invited to help a big company create an intranet. What they wanted wasn't anything special. In fact, the whole project was started because the CEO wanted to have a place to post his messages to his employees.

I told him to just use email. But then Human Resources also wanted their online place, and so they had "invented a need."

Essentially, all they wanted was an intranet where they could post news and updates. They went out to a number of enterprise intranet providers and came back with with quotes ranging from $50,000 to $150,000/year.

With a Wordpress blog, you would have all the tools you needed. Employees could comment, rate, and include extra things via the thousands of Wordpress plugins. And it would also allow employees to subscribe to the content that mattered to them, instead of being bombarded with everything.

And then, all you needed to do was to create a compelling front page. Something that, in a newspaper like manner (think Flipboard layout), would present the latest posts from all the blogs. This could be done in about a week by a fairly competent designer/developer.

Total price: $4,059.95 (or about 12 times cheaper than the cheapest quote from an "enterprise intranet provider")

They looked at me like I was some kind of alien. Apparently, my solution wasn't enterprise-ish.

The cost of business

I could give you thousands of other examples with similar problems of inflated cost. We live in a new world. The cost today are different from that of the past.

An enterprise go out and buy an expensive Lotus Domino server, another server for online replication, routers, UPS, a hardware firewall, a SAN storage server, and a backup server.

Then they will put it all in a room that has to be specially protected with a keyless entry lock, enforced doors and windows. They have to install industry strength air condition and fire suppressant systems. Not to mention buying expensive server rack cabinets.

They have to hire several supporters, an IT network administrator, and a CTO to manage them all.

And, they also have to buy and install Lotus Notes clients for every user.

The cost is phenomenal.

A startup go out and get a Google Apps for Business account. It is far more reliable. It is far more secure. Is managed 24/7 by some of the best people on the planet. Can be used on any device, using any client app, in any browser - anywhere.

The cost is just $50/year per employee.

In comparison: The cost of hiring an IT Network Administrator is 50,000/year, or the same as 1,000 employees with a Google Apps account.

It is time to change. Not what you spend you money on, but how you spend it. If you want to be successful in the new economy, you have to think like a startup.

Just imagine what would happen with the Government's budget, if they stopped talking about what to spend it on, and instead focused on how they are spending the money.

In all the above examples you could cut the budget by at least 80% ...and still end up with a better product.