How to Determine When Laggards Change

If you are reading this site, you are one forward thinking people in the world. You use all the new devices. You own a smartphone, you have a tablet, you are constantly connected, you decide what you want, and when you want it - because everything is 'on-demand'.

You also know that there are still a lot of people out there who are not like you. The laggards. The ones who never change. Either because they don't want to, or because they can't (e.g. several of my friends haven't embraced Facebook yet, because it is being blocked where they work).

But how do you tell when the general public has truly embraced the new world? Not just in what people use, but also in how they think? Well, there is an easy way - just look at the comics.

It turns out that the last people to change are the comic artists. Let me just give you a few examples:

This is a Garfield comic from three weeks ago. John Arbuckle is talking into a strange looking box of enormous size, connected to an odd looking string. I think they used to call this a phone. Personally I haven't seen one, anywhere, for the past 10 years.

Here is another one from last week, where Adam is talking with a friend, and he is just discovering the wonders of exercise DVDs. Who buys DVDs anymore?

Today we use XBOX Kinect...

Here, Broom Hilda is carrying a TV and a satellite disk on her back, to get kids to go to school. And this comic was published today. I bet she should will love to get an 4G-iPad with Netflix.

And finally, Ziggy is sitting in front of something bulky (again, published today). I think this was what they called a monitor, but I cannot remember the last time I saw one. 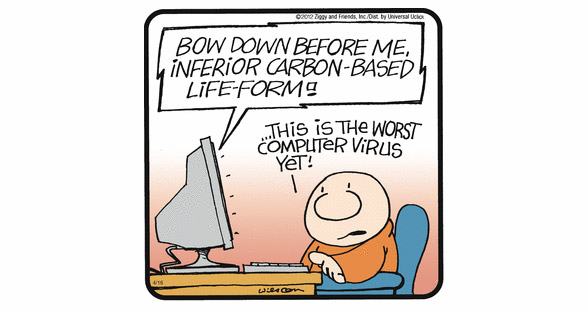 The point is that the comics have to appeal to as wide an audience as possible, so artists use objects that they think most people can identify with. They are not drawing what most people do, they are drawing how most people think.

When the comics change that's when you know the laggards have changed too. But until that day, your kids will think of the Broom Hilda comic as if she is carrying a TV on a hot day, and that's why she is under that big umbrella.