How To Really Stop SOPA/PIPA

Today is apparently the day where many sites will go dark in protest over SOPA and PIPA, the two very invasive anti-piracy laws, which will cause a lot of damage if turned into law.

Literally, any site that allows people to engage with it (i.e. every single site on the planet) will have to prescreen and actively monitor every single post a user makes, otherwise their site might be censored. One example is Facebook, just imagine if Facebook had to monitor every single post before it was posted. That would require an army of employees, which would cause them to go bankrupt in a second. The amount of information posted online has far exceeded any level of possible manual oversight. Even today, when the law isn't in place, many startups have been forced to closed down because the constant amount of DMCA take-down notices proved too expensive to manage.

The privacy concerns of SOPA are enormous because it will literally mean that you will never be able to use any service online without having someone observe every move you make.

There is no question about it. We need to stop SOPA and PIPA.

The problem, however, is that we are doing it the wrong way. The copyright holder's argument is simple. Piracy is a huge problem as millions of sites are giving people the means to download their content without paying.

And it is extremely easy for the RIAA or the MPAA to prove their point. All your need to do is to visit Google, search for ...say ..."Cars 2" brrip and you will find 21,400,000 sites that either host or link to a ripped Blue-Ray version of Pixar's latest movie. And many of these sites are dedicated to the sole purpose of facilitating piracy. 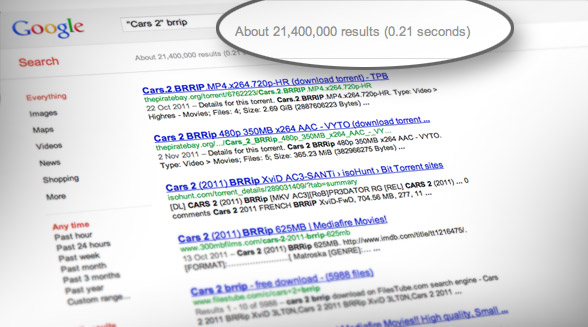 It is the same on YouTube ...If you want to see an episode of "The Penquins of Madagascar" all you need to do is to search for it. Dreamworks Animation can then see that many of the videos have been viewed several thousand times-some even getting close to half a million views. Which means that the video's are viewed more times on YouTube than when they license the same videos to a TV network. MPAA argues that this is a big problem for them (and it is), and they have plenty of evidence to prove their case to the US Senators. 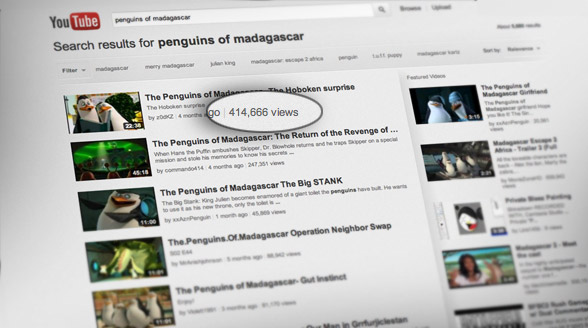 On the other hand, we, in the tech world, know that this is not how the world works. We know that even if we managed to successfully stop content from being posted to YouTube, Dreamworks would not suddenly get half a million extra customers per video. We know that piracy, in some cases, helps content to grow, and we argue that piracy is merely a reaction to the copyright holders restricting their content. If people want to view it on YouTube, why do they still focus their business model on TV networks? Why do they not sell it directly to people wherever they are?

The tech industry's argument is then that we should allow piracy to happen, because there is nothing we can do about it anyway.

Imagine then that you are a US Senator, and you are being presented with these two arguments. On one side, you have the copyright holders who can point to 21 million websites facilitating copyright theft, and piracy view-rates exceeding most licensing agreements. On the other hand, you have the tech industry, saying that people should be allowed to steal, because of some vague opinion that it might not be such a bad thing ...or at least not that bad ...or at least not entirely good.

What decision to you think a US Senator would come to? If I where a US Senator, with no clue about the internet, I would vote for SOPA. I would be stupid not to. We cannot have an internet where people can just steal other people's content. Of course we need to block those 21 million sites. They are engaging in unlawful activity and do not deserve to be protected. And if those sites hide in foreign countries, we need to have the ability to stop them from harming US businesses. This is what a US Senator must do. Protect America from foreign corruption. It is the patriotic things to do!

So, today, many sites will censor themselves to protest against SOPA and PIPA ...which will have absolutely zero effect on the US Senators. All you do is to prove the copyright holder's case, and you annoy your readers.

Wikipedia's protest and other blackouts will not solve anything. They are a total inconvenience to users who may want to use the service. What is accomplished? People will get mad at Wikipedia rather than mad at the specific Congressmen who promoted these bills.

Others encourage people to sign petitions and call the politicians, but we are using the same vague "opinions" as the tech industry, and as such, you are only confirming that there is indeed a big problem online. Not only is piracy a huge problem, but, apparently, many people even believe they have a right to it.

Other people, like John C. Dvorak, argues that the real solution is to start a campaign directed against the Senators themselves, so that they will lose the next election. That is actually a pretty good idea, but it is not likely to work because SOPA will be turned into law before the next election.

The only solution is to *prove* that the copyright holder's "evidence" is flawed. That, if piracy where to disappear, it would not provide these companies with tons of money, nor will it reignite their traditional business models.

If we can prove that the copyright holder's claims of billions in lost sale isn't true, it will be very easy to also prove that the cost associated with any law censoring the internet would cause extreme economic harm to US businesses.

How do we do that ...well, it's simple: We stop pirating and stop buying from companies that restrict. That is the only way we can come up with good enough counterargument to prove that SOPA is bad.

Think what would happen if everyone where to stop pirating for the next 6 months:

For copyright holders, the non-piracy world would be a bit different:

And, of course, for the people ...well, things might be frustrating for a while:

That's it. If we want to stop SOPA and PIPA, the best thing we could possible do is to stop pirating. It would punish the traditional copyright holders and force them to change. It would reward the people in the digital world. We would have a much better economic foundation that encourages innovation. And, startups would be able to focus on what really matters instead of legal issues and privacy invasive monitoring.

Piracy is not a technical problem - it is a cultural problem. It is actually hurting new media far more than the old media. We need to change that culture.