I Would Rather Have Bacon Than Klout

Yesterday, Klout made another change to its algorithms (as you probably already know) and most of the media professionals experienced a dramatic drop in their "Klout Score." Mine was no exception; I dropped from 68 to 55.

Not surprisingly many people complained. A few complained because of the drop itself, but most because it just illustrates how useless it is. And a new movement was formed #OccupyKlout making jokes about it (and occasionally mentioning tear gas.)

Klout tried to explain it in two ways. First is a long article detailing what makes up the Klout score (in very vague terms.) Another way was when Klout wrote (As they always do):

I have always wondered about that. Every time they did something new or added another social channel, your score would always just go up. Doesn't that just prove that it is irrelevant? They measuring klout based on volume, and not the actual effect.

But all of this is insignificant compared to the real reason I wanted to write this article. Klout was irrelevant long before the recent change, and here is why.

My biggest grief with not just Klout but all social analytics services is the notion that a passive user is worthless. Klout calls this "amplification" and "network impact" and the idea is that only people who retweet, comment, like or share your content is worth your time.

We see the same with most social surveys. Like the many surveys pointing out that a large percentage of Twitter users are just listeners. They never engage.

Somehow this has been transformed into a negative.

But let me tell you something. I like listeners just as much as my active followers. They are worth their weight in gold.

One simple example: Roughly 89% of my Baekdal Plus subscribers are passive followers. But they subscribed! That is worth 10 times more than a person who hasn't subscribed but is always engaging.

Think of it like this. If you are planning a webinar and post a tweet "Join me this Friday to learn about Social ROI. Sign up here!" Most of the people who would join are passive listeners. People who are following you and coming to your webinar, but didn't engage with your tweet.

Klout and all the other social services cannot measure this, they only measure activity. And with the latest change there are indications (and unconfirmed rumors) that these valuable passive followers will lower your Klout score. 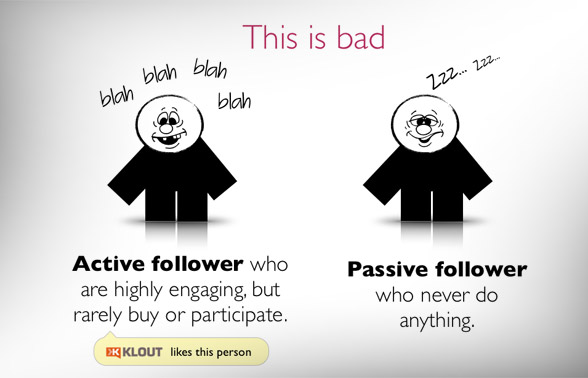 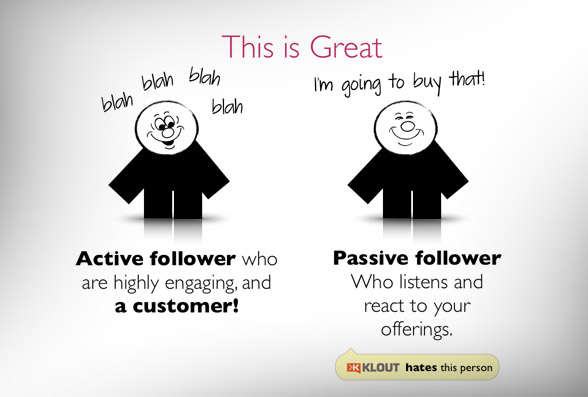 Influential people are more important regardless...

Another concern I have with Klout is their focus on people with a high Klout score. They call this Network Impact:

Basically, just being followed by an influential person will increase your rank.

I would prefer the low-profile followers. They are worth far more to me.

Again, this doesn't mean the influential followers are not worth anything. They are very valuable *if they help you*. But consider this: 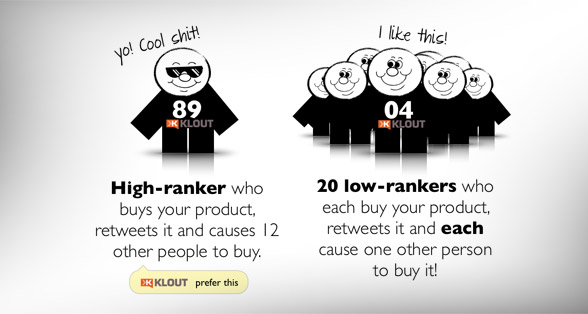 Your rank is not your rank

Another big problem with Klout is the rank itself. It is not based on you. It is based on you in relation to everyone else. It sounds like a good idea but makes for a huge mess (as we all just noticed when our scores dropped.)

The problem is that the Klout is a score from 0-100. The most influential person has 100 (Justin Bieber) while the least influential has a score of 0-and you and I are somewhere in between.

So let's say you have a score of 54, and a number of people (in other industries) do something spectacular that raises their scores. Then your score will drop. Even if you are doing the same thing. Even are just as influential as before. Your score will drop because other people (not related to you) have become more influential in their area of expertise.

Your Klout score is misleading. It is not reflecting what you do as an individual.

Look at the graph below, the fluctuations that you see does not necessarily have anything to do with you. A drop or increase in Klout can merely be that other people are doing something, causing the entire Klout score to adjust.

The problem with Klout is that:

Which leaves us with the only useful metric in Klout, which is True Reach.

You might be thinking "Maybe Klout isn't such a good idea, maybe I should use other services instead-like Peerindex?"

But no. Peerindex has exactly the same problems in just a slightly different way. They too devaluate passive listeners. They too base their score what other people do unrelated to you. And they too make strange assumptions on what's important or not.

I know several people who are more successful than I, who have a lower score on both Klout and Peerindex.

The problem is that they are not measuring the right things. They are trying to value a person based on how many people he talks with while walking down the street. You might think a person who communicates a lot is popular (and he might be), but unless you can tie that to an actual outcome, it is just "fake popularity."

My advice is to stop worrying about it and instead go out and buy Olivier Blanchard's excellent book "Social ROI."