I'm Genuinely Worried About the Future of US Media

As a media analyst, I have now come to a point where I'm genuinely worried about the future of the US media, because of how it has allowed itself to become completely distracted by Trump.

Mind you, Trump is a problem. It's obviously not okay for a US president to call the media the enemy of the people, to continually lie to the people (often because he simply doesn't know what he is talking about), and all the other things. All of which absolutely is the role of the media to correct.

But we in the media also cannot become the 'opposition party'. That is not our role, and if we happen to end up in that state anyway, the result is dreadful for the future of the independent press.

Last week, for instance, I heard the Executive Editor of The New York Times say that: "Every time Trump tweets it drives New York Times subscriptions wildly" ... this is not a good thing. 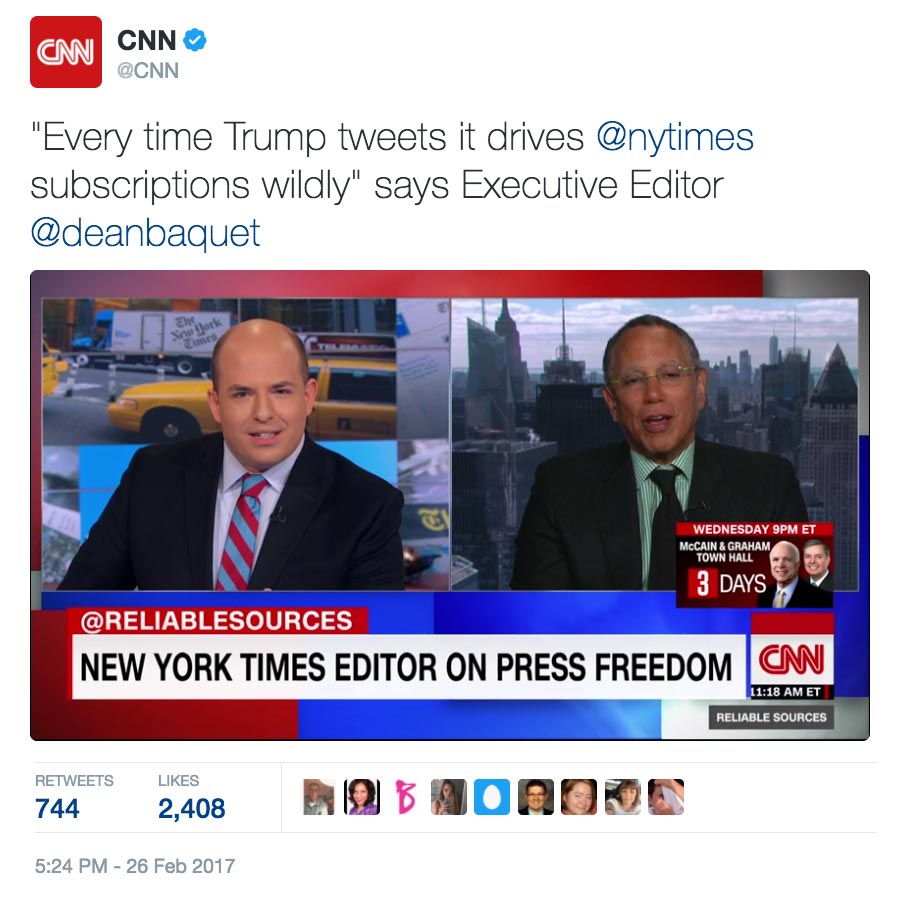 I mean, sure it's nice that the New York Times is growing and that they no longer feel they have a problem with their future outlook, but that is not what is going on here.

What we are seeing instead is that the New York Times is only winning because it has become the voice of the opposition party. We see this in every single study.

Here we have a study from Gallup that shows a massive decline in trust in media overall, but even more so for Republicans. 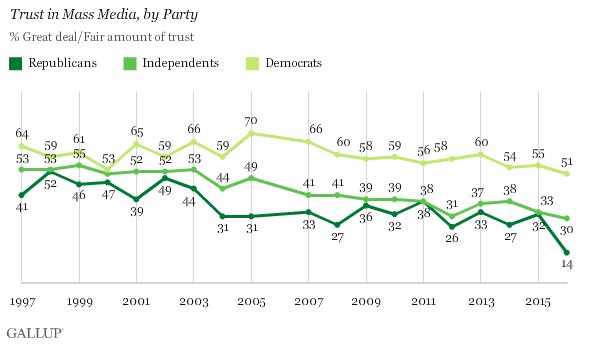 But worse than this, when asked specifically whether people trust Trump or the media, Quinnipiac University poll found a scary level of polarization between Republican and Democratic voters. 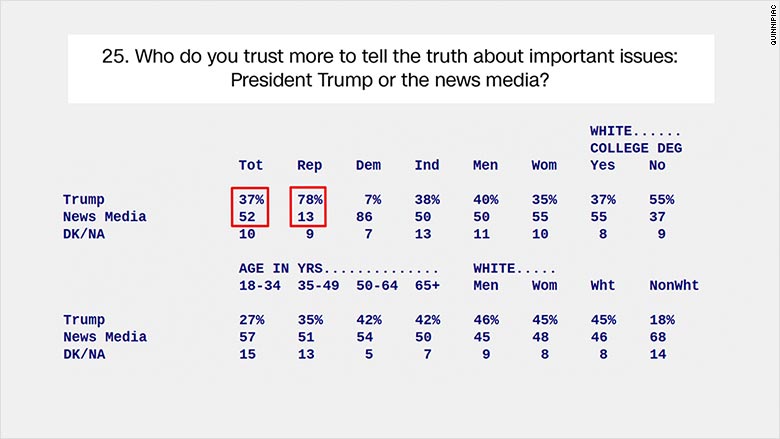 Only 13% of the republican voters trust the media over Trump.

In a PEW study we see an almost total split between where people get their news, in relation to their political stand: 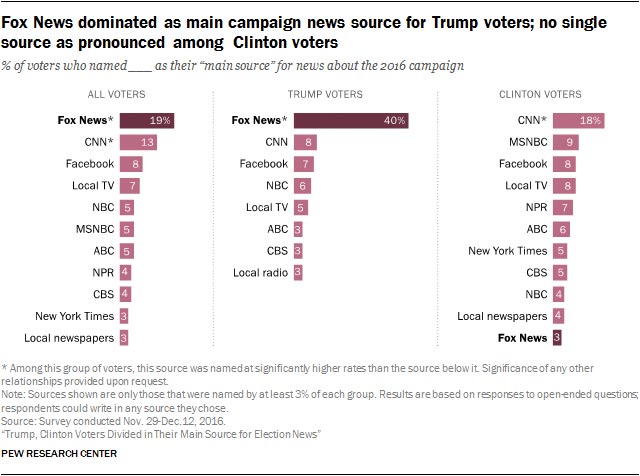 All of these point to the fact that the US media is no longer an independent press, but has become a partisan form of media.

Mind you, it's not like CNN, New York Times, Washington Post and others think of themselves as partisan media. They obviously don't, and the journalists are also genuinely doing a good job. But this doesn't change the reality that the public now sees the media as partisan.

When Dean Baquet, the Executive Editor of the New York Times, says that his newspaper is winning every time Trump tweets, and that this has made them rediscover their purpose, he doesn't mean that they are being partisan. But that is still what is happening.

All those people who subscribe 'every time Trump tweets' aren't doing it because of the independent journalism. They are doing it because they hate Trump and they see the NYT as their platform for opposing him.

The NYT has become the voice of the opposition.

There are obviously several things that can happen after the next presidential election, but no matter what happens, the result is bad for the media.

First of all, regardless of what will happen, the next US president will probably be a lot more boring compared to Trump. So we won't have daily scandals and idiotic statements to cover. And since this is all the media is covering, we are right back to where we were 2 years ago. If you can't remember where that was, let me remind you:

But it's actually worse for the media if a Democrat wins the next election. If that were to happen, think about where the New York Times would be?

Since the NYT is currently getting almost all its new subscribers from people who are anti-Trump and anti-republican, four years from now it will discover that it no longer has a neutral audience.

So, when the New York Times starts to write critical articles about the new Democratic President of 2021, it's suddenly fighting its own readers who subscribed because they thought the NYT was on 'their side'.

Not only will the New York Times be fighting all those Republican voters who completely hates it and has no trust in it. They are now also fighting the Democratic voters who don't like that 'their newspaper' suddenly writes critical stories about 'their candidate'.

In other words, we suddenly have to fight a declining trust in media from two sides instead of one.

This is what happens when you polarize the media. We might think we are winning right now, but we are actually losing...big time.

So, I'm very worried about the future of US media.

What do we need to do to fix this?

The reality is that we desperately need to rethink the future of media in the US. We have four years to regain the public's trust as a whole ... and not just those who are anti-Trump.

How do we do this?

Well, one way to start would be to get out of the political bubble and instead focus on stories from the public's point of view.

A while back I wrote something about this, in which I talked about the need for a different editorial focus. I wrote:

Take a topic like that of Mexican immigrants. The way the media has been covering this is almost entirely from a Trump perspective. By this I mean we have covered what Trump said, what he did, what he might do, what people he might do it with, what he tweeted about it, what his press secretary said about it, etc.

What I'm saying is that we need to change that, by keeping the focus on the ball instead of the person.

Meaning: Define an editorial focus where maybe only 10% of the stories are about what Trump thinks/plans/does, while the other 90% is about what the public thinks, what these immigrants are actually like, how they are actually benefiting US economy, and so forth. In other words, actual real world stories instead of made up realities.

It's our role in the media to keep the public informed. It's not our role to be the host of the reality TV show: 'President Trump'.

But it goes even further than this.

Right now, the media is in 100% reactive mode, in that we wait until Trump has done or said something, and only then do we start to look into it. In other words, we are allowing Trump to completely define the editorial agenda.

We need to stop doing that. We need to start either listening to other sources for news, or to become proactive and anticipate what the public wants before we listen to the politicians.

Let me give you a simple example. One of the biggest problems in the US right now for young people are the problems with the education system and the rising level of student debt. It's a very real problem affecting millions of people every single day.

How many front page stories have you seen about that?

Today Trump is able to define the media as his enemy and get away with it exactly because we only focus on him. But if we in the media focused on the public instead, politicians wouldn't be able to use that tactic.

Trump's voters (and a large part of the Republican base) hate The New York Times because they don't feel it's a newspaper for them. They don't feel that it has ever done something that they care about.

This is a general problem across all US newspapers. The public doesn't feel that the stories we cover apply to them, so they react to news not in relation to their own interests, but in the form of outrage towards other things.

We need to change this to break the polarization and declining trust that we see today.

Keep the focus on the ball instead of the person. Talk about people's issues, focus on those issues, on reality rather than politically made up problems, and make yourself relevant for everyone regardless of political affiliation.

We are not winning if we only gain new subscribers when Trump tweets. This cannot be our subscription strategy.