Is a Headline Really that Important for Sharing?

Yesterday there was a bit of a hoopla about an article written by Nick O'Neill called "How Forbes Stole A New York Times Article And Got All The Traffic."

The article is about how Charles Duhigg, of New York Times, wrote a very long article about "how large companies like Walmart and Target collect data about your individual consumption patters to figure out how to most efficiently make you happy".

Then the following day, Forbes writer Kashmir Hill picked up on it, and copy/pasted it into a condensed version and then gave it a new headline "How Target Figured Out A Teen Girl Was Pregnant Before Her Father Did."

Nick then found, quite wrongly, that "the New York Times article has 60 likes and shares on Facebook versus 12,902 which the Forbes article has", and as a result, concluded that writing a good headline is very important.

Let's debunk this myth once and for all.

First of all, the sharing numbers were wrong. The real numbers were 14,000 likes for the New York Times versus 15,000 for the Forbes article. In reality, there wasn't that much difference in sharing.

But the real problem is that Nick is thinking one-way exposure, not two-way sharing. People do not share anything because of a headline.

Here is how it works. In a one-way exposure world, a great headline is very good at getting people to click on a link - that has been proven many times. 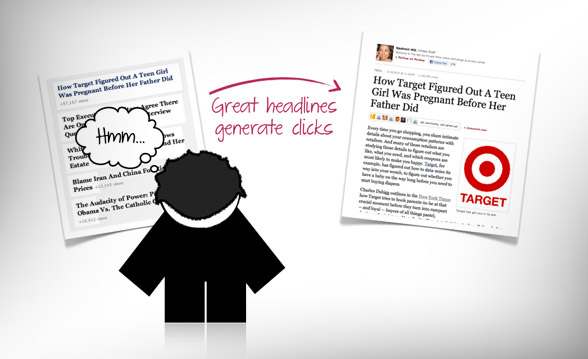 But the headline is not the tricker of sharing. The tricker is the impression people get *after* clicking on it. Sharing is what people do *after* the point of exposure - not before or during, but after! 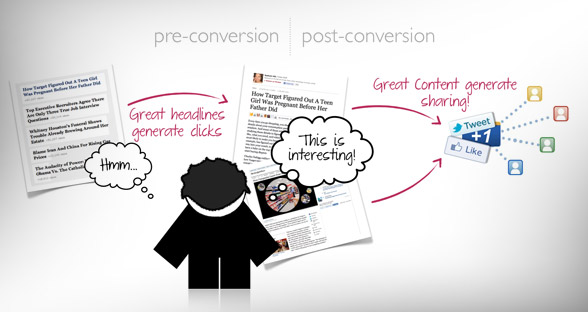 Think of it like this. People are not going to share "this song is great" before they have listened to it, not even if you give it a catchy title.

The bigger issue here is content theft. I have no problem with journalists 'reflecting' on somebody else's' work (which is what I'm doing here). But when the game is to 'take the work of others and repackage it' we are heading into murky waters.

Jim Romenesko followed up on that in, "NYT reporter defends Forbes writer accused of 'stealing' his work."

Statements like this one, from Nick O'Neill, can literally make my blood boil:

I wouldn't say that what Kashmir has done is a bad thing, it's just a result of the current state of online content. I've done the exact thing myself on many instances over the years and in many cases I was able to outperform those people who I summarized. Do I feel bad about it? Not at all, it is what it is: the game we're playing.