It's Not Alright To Aid Criminals To Improve Traffic

Journalists don't have the right to aid criminals, but many apparently think they do. You probably already know the story about the stolen/lost iPhone 4G, but let me summarize it.

A few weeks ago, a new prototype iPhone 4G was lost or stolen, and came into the possession of a person who clearly knew he should not have it. That person then decided not to return the stolen iPhone prototype to Apple, but instead sold it to the highest bidder - which happened to be Gizmodo (which makes it theft).

Gizmodo then published an article, revealing all the details of this stolen iPhone 4G to the public. Then today, the police shows up at the journalist Jason Chen's house with a search warrant - and confiscates every digital equipment he owns, in order to find the criminal.

As a result many journalists reacted by saying that Jason, as a journalist, should be protected under the right of being able to report freely and to protect his sources according to the law.

That is of course, a load of bullshit.

As a journalist, you of course have the responsibility to be the watchdog of society, and in that role, also to be protected from the bad guys (whomever they might be). And that includes the full protection of your sources.

But, you do not have the right to aid criminals to do harm.

Let me explain why...

Every journalist knows that besides writing stories for their newspapers, they are supposed to be the 'watchdog for society.' It is their job to dig up stories about bad things in the world, and inform us about it, so that the public can do something about it.

This principle even goes so far, the journalists are protected by the law, so that they can tell these stories without fearing retaliation from the companies, people, or governments they are writing about - and that includes protecting their sources.

This is a very basic principle of journalistic rights - and it is a good thing.

One example. If a medicinal company decides to use unsafe substances that cause nasty side effects, to cut cost, and then tries to hide that fact. That company is clearly doing harm to society - and needs to be stopped.

What usually happens is that an employee decides to leak secret documents to the media, and the media then has a responsibility to report this to the public.

This is what freedom of journalism is all about. Protecting society by revealing secrets that the bad guys do not want us to know about. And here, the journalists and their sources needs to be protected.

But that was not what happened in Gizmodo vs. the iPhone 4G case.

In Gizmodo's case, we had a good company, who was not doing harm to society, which company secrets was stolen by a criminal, who even went as far as to sells them to the highest bidder.

Here, the media is not protecting society from harm, the media was, in the lust for 'ratings,' paying criminals to give them material that they have no rights to be in possession of in the first place.

Instead of helping society from evil. Gizmodo is aiding a criminal in doing harm to a company who is doing good.

It was the same with the Techcrunch vs. Twitter case.

Twitter wasn't doing harm to society, they were actually trying to do many good things. Society wanted to know more, but wasn't told, so a hacker broke into Twitter, stole many internal documents and handed them over to Techcrunch - which Techcrunch in a very unethical distorted sense of reality thought they had the right to publish. Which they did.

Journalists who think they have the right to aid criminals in doing harm need to get their head examined.

The line you cannot cross

It is all really very simple. The line between being the watchdog of society, and being the scum of society, is not that hard to understand.

All you need to do is to ask. Who are you aiding, and who are you working against?

If you are aiding people who want to stop a bad company, then you do not only have the right, but also the responsibility to report that story. And society in return has a responsibility to protect both you as a journalist, the media, and whatever sources there might be. 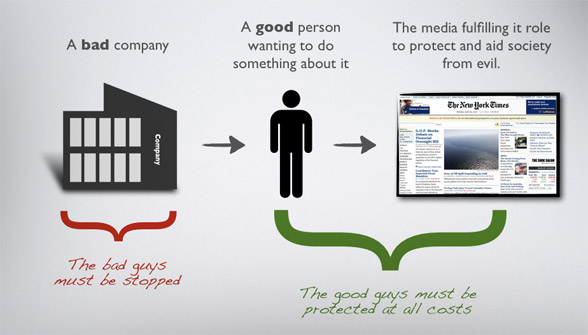 But, if you are aiding a criminal, then you crossed the line. You are no longer upholding the ethical standards of journalism; you are contributing to destroying everything that good journalism stands for. And people who do that cannot be protected. 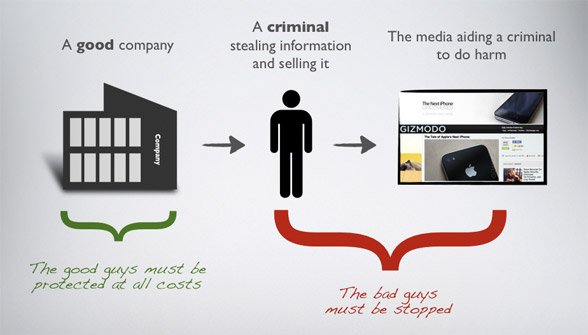 I like Gizmodo; it is good site. But they clearly crossed the line here. What Gizmodo should have done, was to write a story about a criminal trying to sell them an Apple prototype. Turn over the prototype to Apple, ask them for a comment - but not report anything about the actual prototype.

That would not have caused them to get 350,000+ unique visitors, but as a journalist, it would have been the right thing to do. And, it was exactly what most other media companies did.

As a magazine publisher I would never have published the iPhone 4G story.