It's Time to Change Gears

I have made a decision about my future focus areas, and it's a good one: I have decided to stop worrying about old media.

As you have probably noticed, I can get a bit moody about the rather hopeless state of traditional media. With so many opportunities ahead of us, so many discussions, so much input, old media is still doing things in ways that are quite problematic to their future.

We have the chase for page views, mixed with bad analytics. What do you get when you combine those two? Well, take a look at the picture below from an otherwise respectable newspaper: 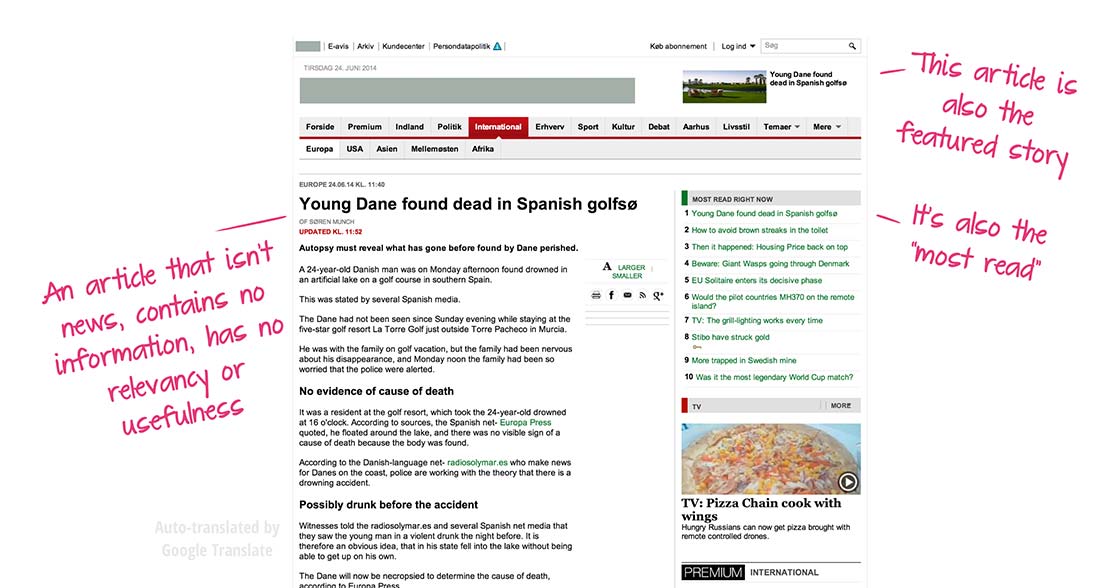 Here you see an article about someone dying while on vacation. But the article contains no useful information. They don't know how it happened, and they cannot even confirm it. But worse than that, it isn't news. Thousands of people die due to unfortunate accidents every year, so posting an article about one of them doesn't mean it's news. It's the olds. As such, it has no relevancy, and no usefulness. It's not like I can read this article and say "Oh... I know, I shouldn't go on a golf course." It's just wasted space, and it should never have been published. The only thing this article does is to make people depressed.

As I tweeted yesterday:

If I could change one thing about the media, it would be this: Focus on information that I can learn from, not the misery of others.

But then look at the sidebar (in the picture). There you will notice that this completely useless article is "The most read" and is also the "featured story" in the header.

And it's because of this that the media industry is currently killing itself. They look at their page view analytics and they see that the highest engaging content is also the crappiest. They conclude this is what people want (it's not), that people are shallow (they aren't), and to be a success online, they should focus more on this (you shouldn't).

We see this so many times. Another story this week was about a man in the US who shot a burglar even though she was defenseless and pleading for her life. That's a very sad story, but it's not news. The only purpose for posting such a story is for the sake of pageviews, and the only effect it has on me is to make me feel depressed.

What about the millions of good things that happened in the world? Why did you choose that story, which I cannot use for anything, instead of a good one that might have been just as useless, but would have made me smile?

It's not just from this newspaper (which is actually a good one). We see this from every single newspaper. Take the Independent. It's a wonderful and highly respected newspaper, and yet they recently launched i100 which is basically just their attempt to be as shallow as possible. 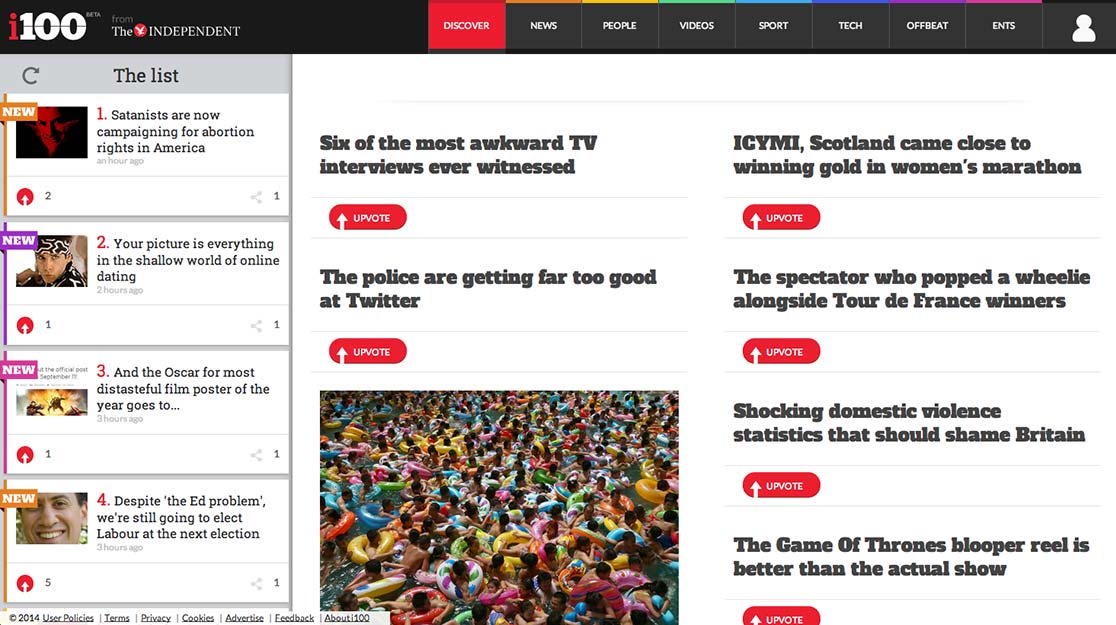 Do you want to know why this happens? It's simple, we see the same thing on TV every single day.

When there is nothing good on TV, what do people do? Do they turn off their TV and start doing something useful instead? No, of course not. People are worn and stressed out, and the TV provides them with a much needed break. So, when there is nothing good one they start surfing channels, and they eventually end up watching seriously crappy shows... or worse... the Home Shopping Network.

And if you only look at views, those types of entertainment sure seem like it's what people want.

People don't actually like these crappy shows, nor do they want them. The idea that people actually want to be mindless zombies is a myth.

So, as a TV network, what should you do? Should you make more low-end crappy shows that people can watch when they are too tired to think? ...or should you create shows like House of Cards or Game of Thrones?

It's not really rocket science, is it? Obviously, it's far better to be the TV company that produces Game of Thrones than the one that just fills the airwaves with noise. As Alan Alda (actor from M.A.S.H.) once said:

When things go wrong on television, we get snow. When the signal can't reach us, when mountains interfere, we get a fuzzy, chaotic blizzard of electronic noise. When the signal does reach us, of course, then the real challenge begins: to put something on the screen that's better than snow.

The same can be said online:

When things go wrong online, we get viral noise. When we can't find the good stuff, when the content strategies interfere, we get a fuzzy, chaotic blizzard of content noise. When the signal does reach us, of course, then the real challenge begins: to publish something that's better than noise.

As a media analyst, I have spent quite a long time trying to explain this. For instance, in my article about "Tapping into the Younger Demographic" I explain why reaching the younger audience isn't about shallow social snacks at all.

And these articles seem to be very popular, but we are not really getting anywhere. And I'm tired of waking up every single morning (usually in a good mood), only to have it ruined an hour later when I read my morning news.

The combination of bad newspaper stories with the sole purpose of gaining a few extra pageviews by making me depressed, combined with my utter frustration of seeing so many great media people do so poorly, acts like a blanket of depression.

So I have made a decision. I'm going to change gears. Instead of writing so much about why the old media don't get it (which should be obvious to anyone by now), I will forget that and instead focus on the new and very exciting opportunities that are all around us.

When I look at the trends, I see two media worlds. I see the old media world which is slowly disappearing (like Kodak), and I see a new media world that is very different and super exciting.

Sadly, the two don't seem to match up. One could hope that the old media world would transform into the new one, but that is not the trend that I'm seeing. There are exceptions, of course, and some of my clients (happily) are part of those. But, in general, the old world of media is drifting slowly away, while a new world is taking its place.

As a media analyst, however, I can approach this in two ways. I can either analyze 'what is', and point out issues that needs fixing. Or I can analyze 'what is to come', and focus my time on helping you get there.

I have always been trying to do both, but most of my mental time has been spent trying to "save traditional media". I'm not going to do that anymore. We are going to take it up a notch from now on.

Think about it like this. There is no point in trying to come up with ways for Kodak to save itself, because they are way past the point of no return. The same is (sadly) true for most of the traditional media industry. But just as the future of photography has never been more energetic, exciting and full of potential, the future of news is the same.

As I wrote in "The Next Step For Newspapers", there is nothing we can do to get back the scarcity and limited channels of the old world, but there are plenty of things to do if we leave the old model behind us.

So, let's change gears. Let's create a future instead of being frustrated by the past.