Kids Should Have Mobile Phones

There is a bit of a hoopla these days about kids. It evolves around several "concerns" that parents have about kids and digital media. Like kids under the age of thirteen are sneaked into sites like Facebook. Or that Klout was tracking kids the same way they are tracking adults. And then last week, a study in the UK found that 66% of kids under thirteen already own a mobile phone...even though most parents are firmly against it.

Also, in the US there is a law prohibiting companies from collecting data about kids under thirteen, which is why Facebook, Apple, Hulu, Netflix and...well ...everyone else prohibits kids from creating an account. And in Europe we have much of the same.

The problem is that the whole discussion has been sidetracked by "fear". Fear that something bad could happen to our kids. And yes, there is a risk, but there is a much bigger risk in teaching our kids to grow up in a world that no longer exists.

Note: I have to point out that I'm not a parent, and I don't have the personal "protective anxiety" that parents (rightly) have.

I like you to do something. It is a simple experiment that puts you into the world we are demanding that our kids should live in.

It first it might sound like a good idea. We are all suffering from varying levels of stress from living in our hyper-connected world. But you will soon realize how much harder everything becomes. If you want to do something, you have to go to a landline phone to do it. The only way you can listen to music, is to visit a physical store and buy a plastic disc ...which you can't play, because you no longer own any device that works with plastic. Or you have to ask your friends for assistance anytime you want to do anything.

Then when you want to watch TV, you can't because Netflix is not allowed, nor is Hulu, or any of the other services. And you XBOX in the back of a Fedex truck somewhere.

When you go shopping, you can't just call home to ask if there is something you forgot to buy. If you are standing at the bus stop, and the bus is nowhere to be seen, you can't look it up on the internet, because you are not allowed to use a mobile.

I can give you thousands of other example of things that are hard to do in a disconnected world. Just think how many services you use every day that require you to register.

Isn't it better to make our kids a part of that as early as possible, rather than to put them into the prison of "when-I-was-a-kid-we-had-to-walk-to-the-store"? It's like forcing kids under thirteen to live like the Amish people, and only when they reach thirteen can they join the ranks of the connected adults.

The problem is even bigger. Anyone, under of the age of thirteen have never lived in a single-connected world. They have always seen the world around them as an ultra-connected. They have never known a world without the internet, the laptop computer, or the mobile phone. Even Facebook has now been around for 8 years, MySpace before that, and LiveJournal before that.

Everything our kids see and everything anyone else is doing are a part of this connected world. Our kids see this limitation as if they are being forcible removed from the world that they know they need to be in to be successful. They also know that the world that their parents try to put them in doesn't exist - and have never existed in their lifetime.

Why do parents force their kids to live in a disconnected world? I will tell you why. Part of it is how we used to look at computers.

When I was a kid I owned a computer, but it wasn't connected to anything. This was before the internet. When I used my computer, I was alone. I was isolated in my "cave" distancing myself from people around me.

Back then it made a lot of sense to force kids to "go out and play", because the computer was truly an anti-social device.

Today, the computer - being a mobile - is first of all a social device. Our kids see the world without mobile as anti-social, but the parents still see it the old way.

We see this clearly, when a group of children is out somewhere, and one of them takes a picture and shares it on her wall. To the kid, this action is all about being more social. Not only is she with her friends right now, but she is also sharing the experience with all her other friends who couldn't be there.

The parent, however, scowls at the kid and tells her to put the phone away so that she can focus on her friends. It makes no sense to the kid to say that, because she is *with* her friends. What the parent is actually saying is that she should limit her interactions. 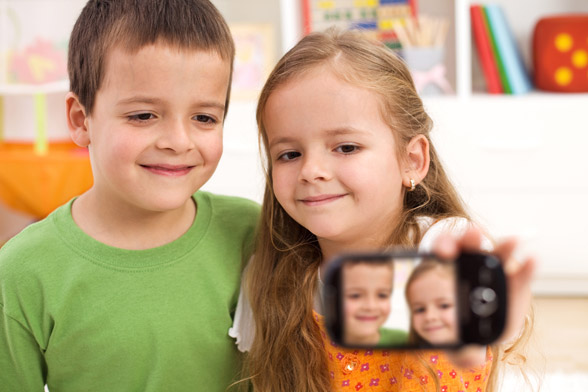 Note: Also read, "I Can't Marry You, I Have a Twitter Account I Need to Maintain" - which clearly illustrates how the old generation mistakes online connectivity with anti-social behavior.

We are teaching our kids that it is more valuable *not to share* - the one thing that you, as an adult, learn is the most critical thing you must do in a connected world.

As I started out saying, I'm not a parent. I don't have a child that I need to protect above anything else - but I do understand the feeling. Nor am I saying that kids should not be protected.

But we are doing it wrong. Instead of protecting our kids from the bad things in our world, we are disconnecting them from the very future they need to be a part of.

What should not be allowed is apps like Smurfs. It is an app that is free to download, but then trick kids into buying a ton of virtual goods. Goods that has no real monetary value, but which you just happen to pay for when you play the game.

ITunes is not the problem. Deceptive business practices are. Apps like Smurfs (and many others) are turning people into the digital equivalent of drug addicts. You are being emotionally rewarded every time you are tricked into buying something ...and if you don't buy, you are left in a state of feeling left out. That is the most devastating feeling a kid can feel.

There are many things in the connected world that needs to be stopped. But what we are actually doing is forcing our kids to be anti-social. We prohibit them from connecting freely with their friends.

The digital world used to make us anti-social, but now that world has been flipped upside down. If you are not connected, you are not social.

Update: If you worry that your kids will smash the iPhone glass, Griffin has the solution ($17.99)