The Media Is Losing Its Purpose Online

One of the challenges that I often come across when legacy media is transitioning to their digital future is that they lose their identity and purpose in the process. The reason is almost always that media companies look at the digital world as a single market, and, as such, compare themselves to other media companies using very simplistic metrics.

The result often leads to failure, or worse, a very monotonous market where everyone is just chasing the same low-hanging fruits.

To put this into perspective, let me illustrate this problem using paper. No, not newspaper or even print. Just regular old paper.

Imagine that you are in the paper business, a market with many nuances, but let's focus on only three of them. The market for kitchen rolls, notepads, and art paper.

The first thing you will realize is that each of these markets is very different from the other in pretty much every way possible. They have different target audiences, different revenue potentials, different profit margins, and very different use cases.

If we talk about revenue first, we see the market for kitchen rolls is all about scale. The profit margins on kitchen rolls is so low that unless you get really big, you won't have a business. As such, both the profit and revenue is defined entirely based on the volume.

The other two, on other hand, aren't in the scale businesses. Sure, they want to grow as big as possible as well, but they are not defined by scale. They are defined by the value they create within each of their niches. As such, a company like Moleskine don't consider themselves to be competing with Procter & Gamble (the group that owns Bounty).

We see the same when we look at their markets. Bounty is in the market of everyone, but nobody ever really cares about them. People don't love Bounty. They only care about the price and the softness (since nobody wants tough kitchen rolls), but most of the sale is actually based on availability and in store placement... and sometimes whether they like the picture of the baby or the puppy usually placed on the front.

It's a product for people who don't really care (no intent)... which again, is why it only sells at scale.

The two other products, however, are very different, but not in the same way. The Moleskine notepad is designed for some people who have that very specific need. In other words, it's based on intent. And, much of its use is designed around a professional audience, in that it's a tool that you use.

Do people care? Well, yes. But the real selling point here is centered on the need.

The art paper, on the other hand, is for an even smaller audience and it's designed almost entirely for people when they are just having fun. In other words, it's designed around their passions. This makes art paper an extremely high-margin product for people who care a lot.

It's the same when we look at sales volume. Kitchen rolls are sold in extremely high quantities and it's something everyone needs every day. Notepads are something we only use on some days, where art paper is only used on rare occasions.

You see the differences here?

It's the same with print publishers. The tabloid magazines are all built on scale, but while they get a lot of traffic, people don't really care about it. It's mostly just something people read when they are bored.

A magazine like Advertising Age, however, is very different. It's used by people who have a very specific need, which also limits its market. Similarly, a magazine like Classic & Sports Car has an even smaller market and is only used by those who have that specific passion. Nobody really needs a classic car, but there is a very passionate group of people who truly care about it. 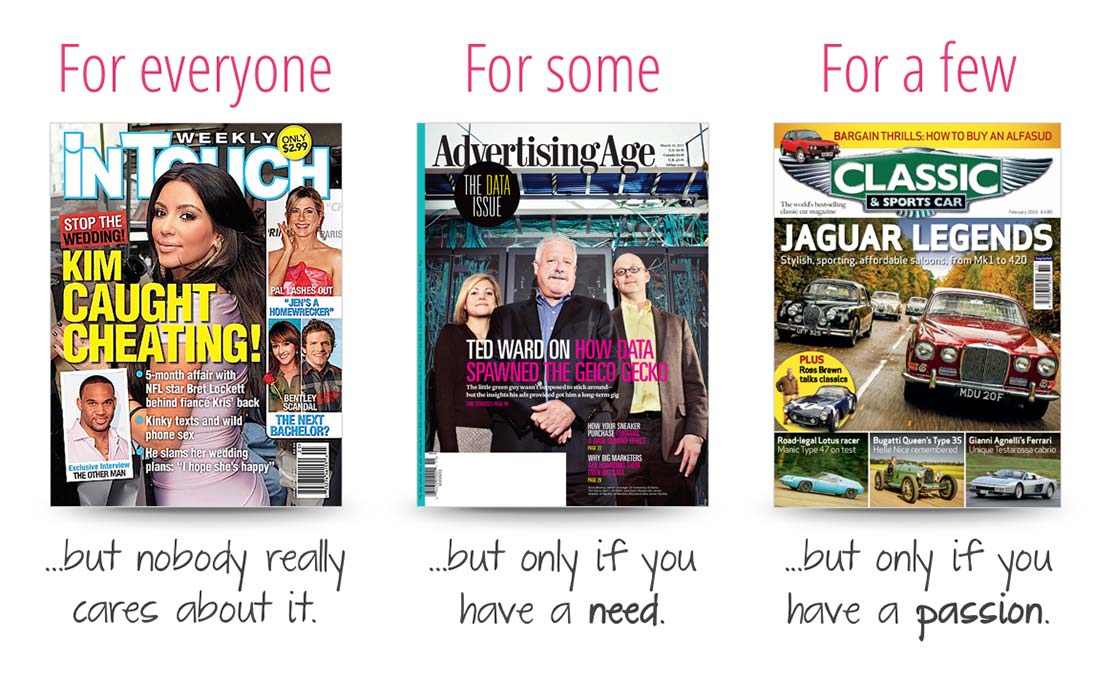 So, what's the problem, you ask? Well, the problem is that as soon as we move online, we get this: 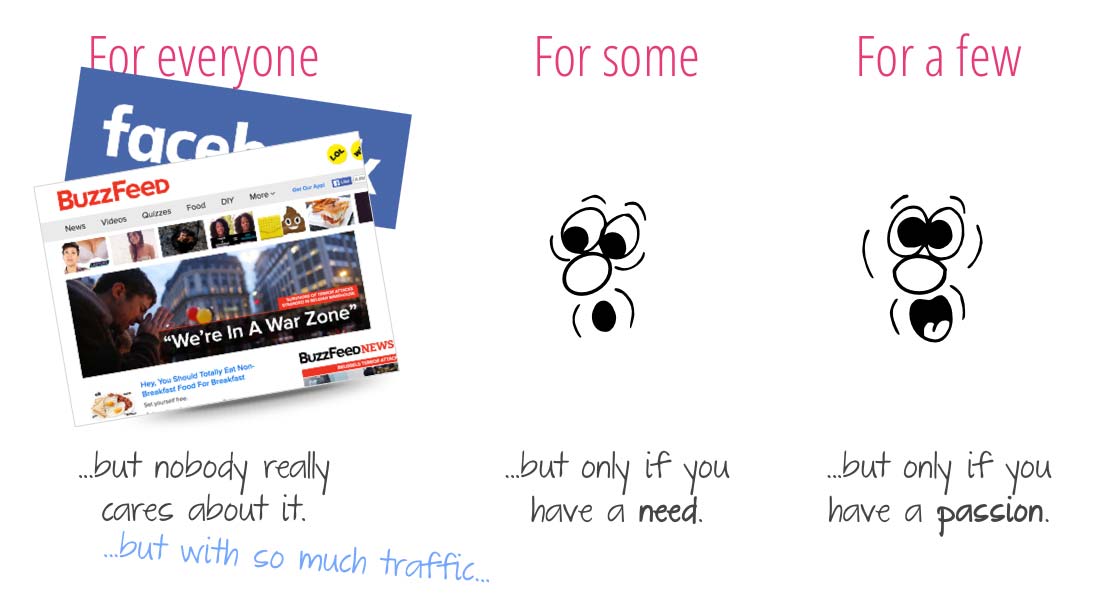 Everyone is talking about sites like Facebook and BuzzFeed. And everyone looks at their crazy traffic levels with deep admiration and, may I say, lust.

Suddenly, they completely forget who they are, what their purpose is, and what market they are in... and instead, their digital strategy becomes 'how we can be more like BuzzFeed?'

Well, BuzzFeed is really good at what they do. A publication for creating content, at scale, for everyone, when they don't really care and are just having a break, BuzzFeed is absolutely stunning.

But this is not the same market as the rest of the media industry. That's one market and you are most likely in a different market. And the problem here is that instead of measuring the success of each of these markets individually, most publishers today are measuring each other as if they are all in the non-niche, low intent market for everyone.

You can never be a company like Moleskine or Canson if you measure your success the same way as Bounty (traffic at scale). But does that mean that Moleskine or Canson are bad companies? No, of course not. Moleskine had an increase in revenue of 13.3% and an increase in profits of 14.9% last year. And it had almost $100 million in revenue. That's amazing considering that they are selling paper within a niche market.

So let's look at a practical example. During the recent Digital Innovators' Summit, the CEO of Hearst talked about how their future strategy is based on building scale. 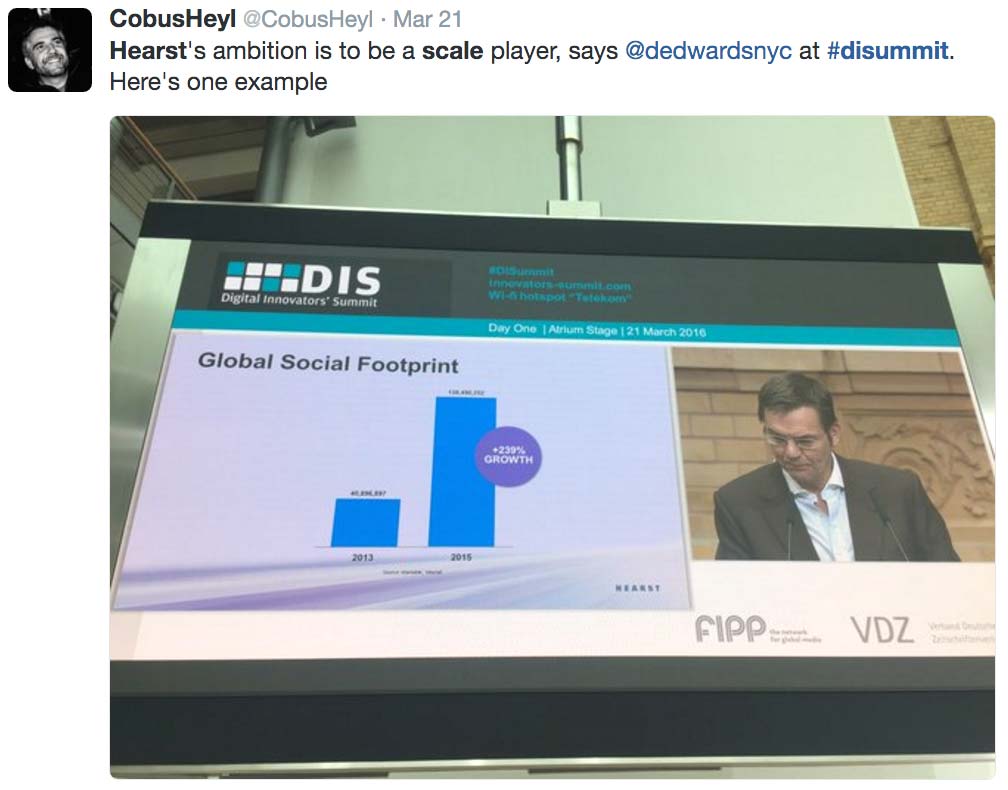 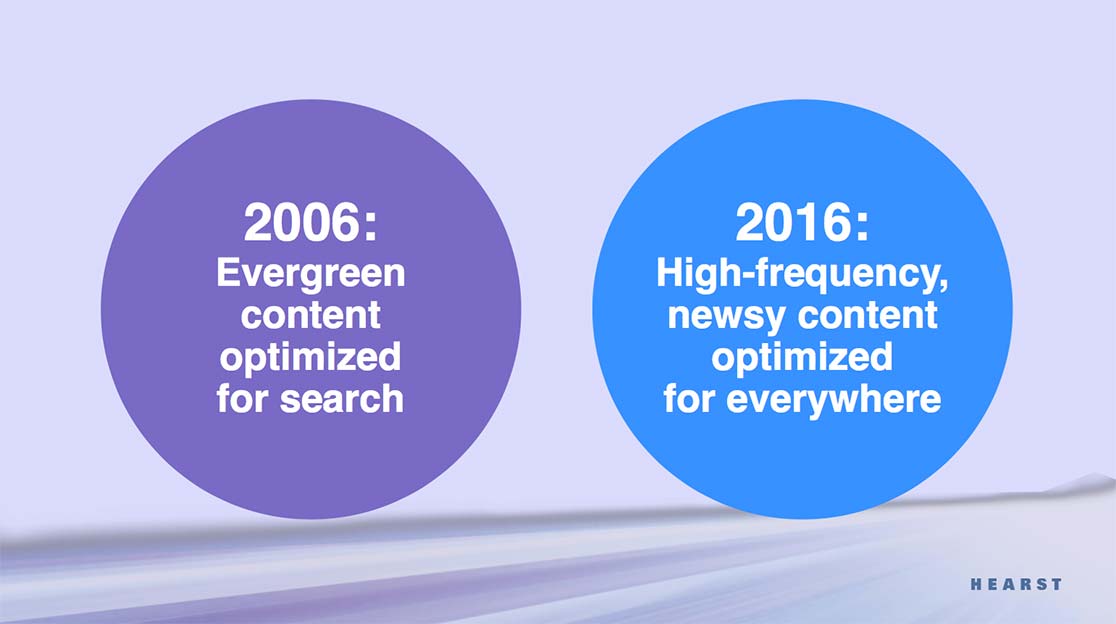 And to do this, they no longer consider the uniqueness of each individual publication; instead, each magazine is now part of a mix that adds to this high frequency of content everywhere.

To do this, they are now cross-posting content across titles. 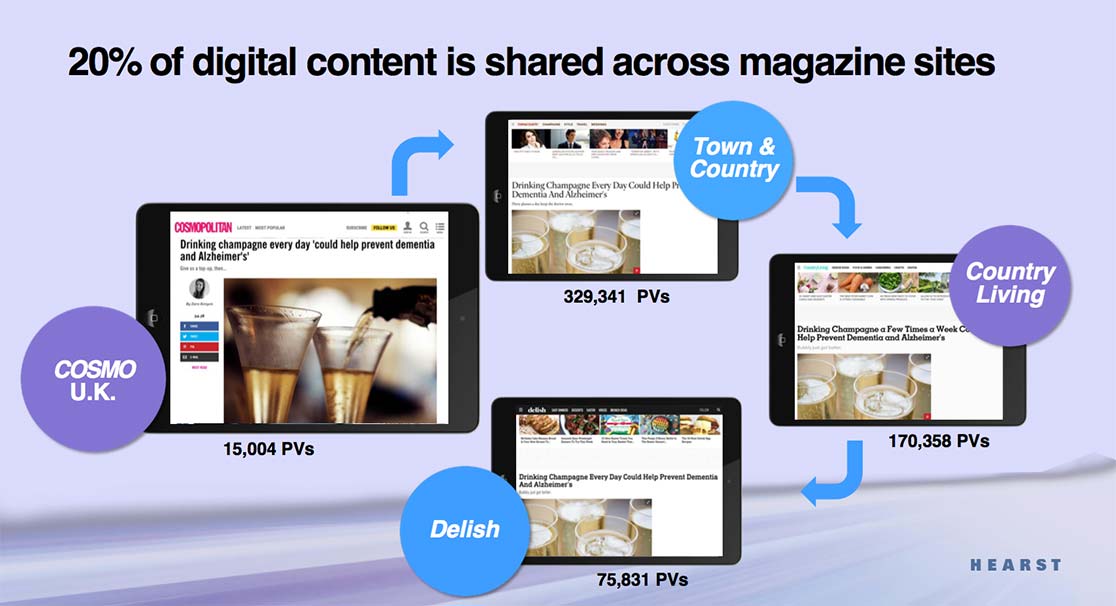 First of all, there is nothing wrong with this strategy. It's exactly the same thing that BuzzFeed is doing. BuzzFeed has several kind of independent titles within its organization, and they all function to add to the daily mix of content for people everywhere.

It's a great strategy if this is the market of your choice.

And for Hearst it kind of makes sense for many of their publications. I mean magazines like Seventeen, Marie Claire, and others aren't really designed for a specific need nor a specific passion, but are mostly something people read when they are on a break.

So that makes perfect sense.

But then we have magazines like Esquire. Esquire, to me, is a higher-end magazine for men who are somewhat more goal oriented and passionate. So, I when I turn to Esquire, I expect content to be more about things I truly care about than content I just read because I'm bored.

And true enough, many articles on Esquire are very good, but increasingly we are also seeing content like this:

Yeah... This is the scale strategy at work. This is the BuzzFeed focus where you are designing for everyone with little or no intent. Content like this might drive more social traffic, but it's also the type of content people don't care about. As I said, it's content for everyone but nobody really cares about it.

Again, I'm not saying this is the wrong strategy for Hearst, in fact, it's probably the right strategy. But it also forces them into a specific type of market.

My point of this article isn't to say that either of these markets is good or bad, because that's not really the point. Each market is good and bad for different reasons. There is more than one strategy to focus on, and each market has very different dynamics, potentials, sizes, and profit margins.

For instance, if you scale like Hearst is doing, you do it by making everything part of the same whole. Whereas if you want to scale as a publisher focusing on true passion, you have to do it as a network of individual creators.

That's two exceptionally different strategies, but you only have to look at YouTube to see how creator networks prosper in a big way.

The ones who fail are those which aren't in either market. Look again at this illustration.

Now take a look at all the different publications you know and try matching them to each type of market. What you will find is that it's really easy to do with some publications (like those above), but exceptionally hard for others.

The ones who are usually struggling to make a difference are those who don't really understand what market they belong to.

There is more than one digital market, so find the one for you.