The newspapers have to learn how to become experts, instead of being a jack-of-all-trades talking about nothing.

We often talk about that the end of print caused by lack of relevancy to the readers. But many people probably don't realize how long this has been going on.

Here is a cutout from a comic from 1973 (39 years ago), and even back then newspapers were in trouble. 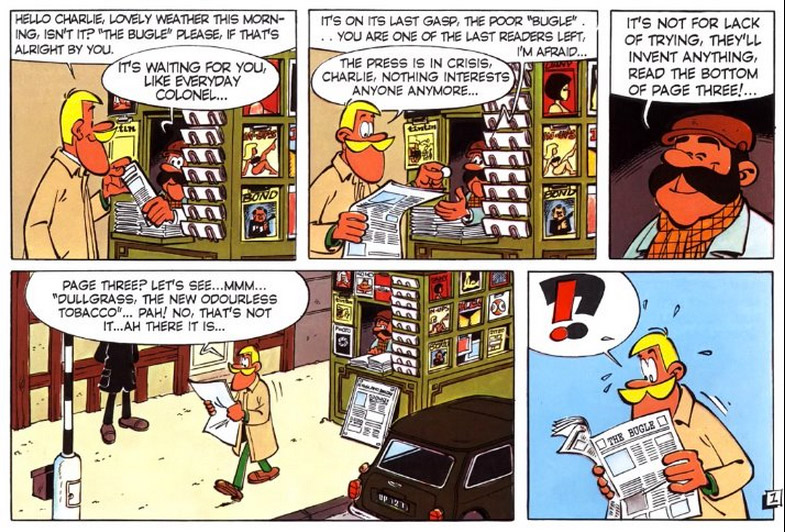 We have to remember that for something to appear in a comic, it would have had to be a common theme; otherwise the reader wouldn't feel an association. Comics are great this way. They are like caricatures in the form of visual stories. And a caricature is an exaggerated version of what's already known.

I just love this cutout because it brings together all the common issues with print.

This is exactly what we still see today. These five points pretty much sums up what newspaper executives say at every conference.

Finally it ends with that moment where the reader is surprised to find something important (or at least highly interesting). That one story (!?) that you want to read.

We accepted the package of mostly irrelevant news, because of those few stories that made it worth it (the mass market model)

Now we have the connected world, and one of its biggest effects is how content is being atomized. We now have a choice. We can decide to follow only the content sources that give us that "!?" moment. We see this on every social channel, but old media is still trying to sell us that package with everything.

The problem is not that people don't want news. We do. We are desperately seeking those "!?" articles, meaning "Wow (!), I need to know more (?).

The problem is that, in an atomized world, we don't have the patience for content of little relevance, or worse, content that is relevant but has been pageview optimized so much that it is unreadable.

A very visual example is what we see happening with TV. In the past, you could sell a package with mostly crappy content, but as long as you included a few really good shows and movies every week, you could persuade people to buy for the whole deal.

It's exactly the same thing that is happening to the newspaper industry. Why subscribe to the New York Times if you only care about a few specific areas of personal interest?

The problem with newspapers is that because they have been focusing on one package for a mass-market, they have turned themselves into the 'jack of all trades, master of none'. When a new electric car is launched they will write about it, but it's immediately clear that they don't really understand what it is about. So instead, we turn to dedicated car blogs that employ writers who have passion and expertise for what they are writing about.

There is no way for newspapers to split up their package, because each section don't have the quality or level of insights to be able to stand alone. The value of a newspaper today is that one occasional article on page three that captivates people's attention.

But this model doesn't work in the connected world of atomized content. The newspapers have to learn how to become experts, instead of being a jack-of-all-trades talking about nothing.

We need the news industry to do that, because everyone is desperately seeking those "!?" stories.

And that...is your new business model!