These days we are all talking about the end of print and the shift that is happening. Just yesterday, I wrote the article "Print to Digital is only the first step." But the downwards slide for the print industry is nothing new. It has gone on for a very long time.

Case in point: A friend sent me these two images from a Clifford comic book from 1973. It tells a very similar story to the one we see today. Newspapers in decline, journalists "padding" a story, and readers preferring "a good telegram" - what we today would call a tweet. 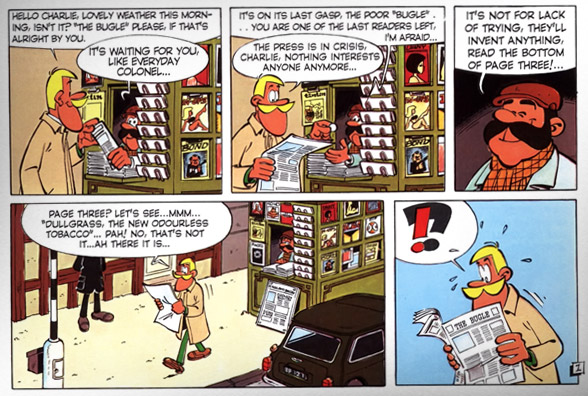 The difference, however, is that in 1973, the only alternative was other forms of print media (and TV). While newspapers had a hard time, the lack of choice meant that the decline only happened ever so slowly.

But when the internet came along, and especially in recent years with social+blogging, lack of choice was no longer a problem. You are not competing with other newspapers. You are competing with what people want to spend their time on. And the result is not really surprising.

When you have a continuous decline, only held at bay by lack of choice. Once you introduce an abundance of choice people do what they always wanted to do.

This is not unique to the newspaper industry. This will happen to any industry.

We see it with the book industry, and how Kindle ebooks is now outselling printed books.

We see it with the TV industry, in which direct streams will destroy the old TV models.

We see it with the fashion industry, in which customers used to be restricted to the choices their local shops had to offer. Now they can buy online - from anywhere.

The question you need to ask is, "If people have a choice would they still buy from you?" You have to make sure that the answer is, "Yes, they would!"