Let me ask you a simple and yet very complicated question. Why does nobody buy Blackberry phones anymore?

The answer, of course, is that Blackberry is losing its market because they feel old. They don't really 'got it' anymore. Their business model isn't inspiring. The focus isn't motivating. Their products... well... are just products.

It's not that they don't have the right features, it's just that Blackberry as a company feels out of touch with the modern world.

It's just that the way you do it... feels old. It's like you are not in touch with what people expect from a media company in the connected world.

Let me give you a typical example: Here is a link to an article from the Washington Post about the explosion at NASA of the Antares rocket. Like so many other news articles, it illustrates a fundamental disconnect from the kind of reporting you would see from digital native media.

First of all, the article has a print focus, in which the journalist at no point takes into account that online we have both images and videos.

For instance, the journalist writes:

Officials reiterated that any specific determination of what went wrong would take time. Witness accounts of what happened varied somewhat. Some said that the rocket appeared to catch fire within seconds after liftoff, then fell back to the launch pad and exploded.

We see the same thing further down the story:

Shortly after the explosion, CNN quoted a launch director as saying that the spacecraft contained classified "crypto" equipment, but early Wednesday a NASA spokesman said by email that "We didn't have any classified items on board.

Why are they quoting CNN? That specific statement about classified crypto gear came directly from NASA's own live audiofeed. Everyone (including me) who had tuned into their stream heard it. NASA directed the flight crew to not enter the area until it could be secured.

We have two problems here. First, Washington Post is quoting another news outlet, in other words, we are talking about a 3rd party quoting another 3rd party, when the actual information is directly available from the 1st party.

The feeling you get from that is a sense of total disconnect.

The second problem is, since the journalist has zero insight himself, he never stopped to question why NASA would say there were classified crypto gear onboard and now say they didn't. To him this was merely a quote attributed to an unknown person that CNN may or may not have. But to all the rest of us, it is a known fact told directly by a NASA director to NASA's own launch crew. We could all hear it.

I'm not saying there is a story here, I don't think there is and I generally don't believe in conspiracies, but that's kind of weird. More to the point, the readers are all wondering about it. But the journalist isn't thinking about what he is writing, or trying to put himself into the reader's mind.

Then we have this part:

The explosion may have been the most spectacular launch failure at the Wallops Island facility, on the edge of the Atlantic Ocean. Video showed a cloud of smoke and a fireball, with small pieces of debris ejected from the center of the explosion.

"It may have been?" Why didn't he check it? And why is he talking about the video in 3rd person as if it's something people can't see for themselves. Again, the actual video is embedded in the top of the article.

Of course, we know why. It's because their article was written with a print mindset, where being disconnected from the information that people should see is the default.

Not to mention this part:

The White House said President Obama was briefed on the explosion. The crew of the space station reportedly witnessed the accident on a video feed.

Everything about this screams of old media culture. A media culture where the role of a journalist is merely to be the delivery person of random bits of information. It's the 'we are only the bringers of news' culture.

This is exactly like Blackberry. It's not that the article is particularly bad. It's somewhat good and covers all the basics, but there is nothing in it that makes it worth reading. It's just a collection of facts about the explosion, without any insight or interest. And it is being delivered in such a way that the feeling you get is that this is only something Washington Post wrote for the sake of their business. The same way as a Blackberry phone feels like it was only made for the sake of running their business.

It's passive, disconnected, distanced, superficial and, above all, delivered in a completely detached way. There is no distinction in this article from any other article, or from any other source. It's the same as what everyone else are publishing.

In comparison, take a look at a video like the one below from Scott Manley. He is not a journalist, but an astronomer with a degree in Astronomy and Physics, and a PhD from Armagh Observatory in the field of small bodies in the Solar system. In other words, he is passionate about what he is talking about.

He is also working for Apple, and is best known as an Astronogamer.

This is a million times better than the Washington Post article. While WaPo was only bringing you the news without providing any insight or perspective, Scott Manley provides you with real insight.

I would not even for a second consider subscribing to Washington Post, but I would happily support Scott and many other people like him.

This is the scary reality for the old world of media, for two reasons:

First, it's scary because it illustrates how the old form of journalism has lost its value because of how it fails to connect. It just feels old and out of touch to everyone reading the article, and you only have to look at Nokia and Blackberry to see what the result of that is.

The feeling of not really being there is disastrous for any brand, and newspapers are now learning this the hard way.

Secondly, it's not that we don't need this type of news, the same was as the reason why Blackberry is failing isn't because people no longer need a phone. That's not the problem. The problem is that, in the near future, these types of articles can (and will be) made completely automatic by advanced news algorithms.

We don't need journalists anymore to just be bringers of news. We already have computers that can do just that... and just as well.

As I wrote back in March, a study in Sweden found that people today can't distinguish between stories written by a journalist and one written by a computer. 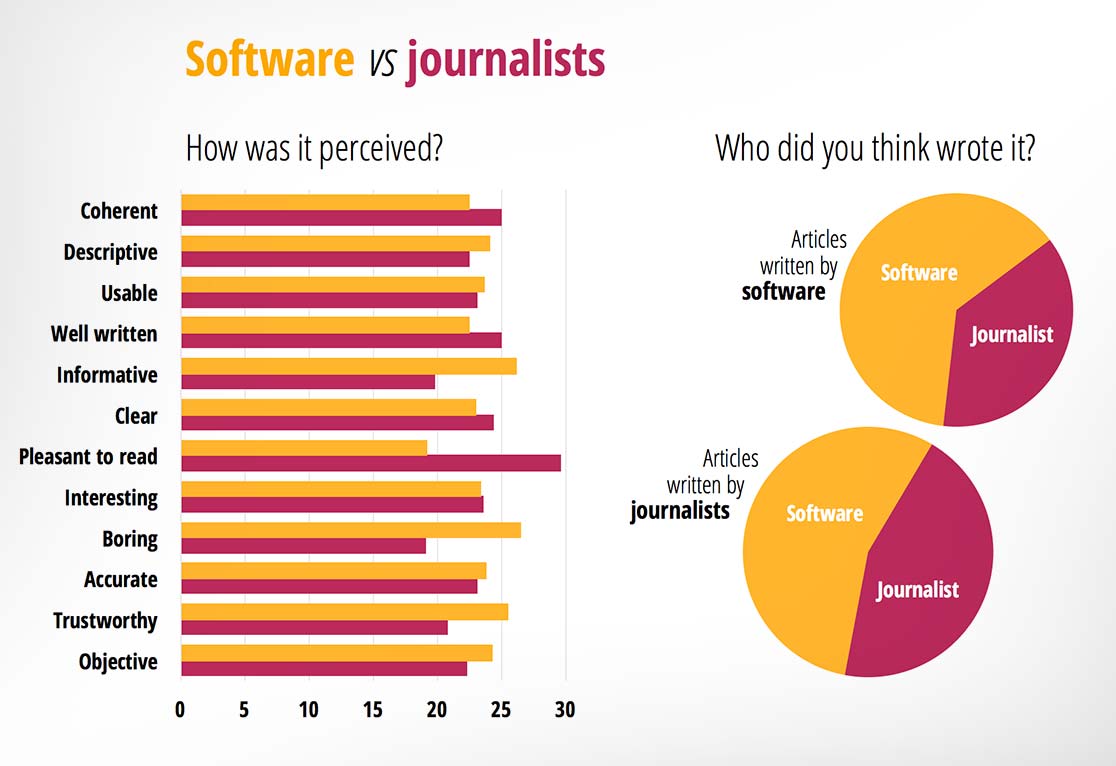 You don't have a future if what you write are articles like the one from the Washington Post, articles that have no distinction and is merely delivering information. Not only because you would then have no distinction between your articles and thousands of others, but also because those types of articles will be fully automated in the future.

Computers already have the capabilities, but we still have a problem with the original data being inaccessible. But that too is changing.

Newspapers have a Blackberry moment. It's not that people don't need news, and it's not really that the newspapers posts specifically bad articles. It's just that the way it's done feels out of touch, and people are increasingly seeking other options.

Most newspapers feel like they are not really present. There is a huge disconnect between how you report the news, and how people feel when they read it. It's like the newspapers are living in some kind of 3rd party world. They are never really connected to either the reader or the story.

I have said this before, but the trick is to bring out your inner geekiness for the stories you write. People need to feel that you care about what you write about, and not just get the sense that it was yet another random story that you wrote to meet your daily quota.

People will not need journalists to bring them news in the future, we have automated algorithms and social connections for that. The sooner you accept that, the sooner you can start to build a better (and economically viable) model.