No, Netflix Got it Right

Yesterday, the tech circles were in a frenzy to discuss Netflix's latest move. They have decided to split their company in two. One called Netflix, focusing entirely on the new world of digital streaming. And a new company called Quickster, who will only deal with the old world of physical DVD-via-mail delivery.

Netflix has had a tough year. They are in a constant battle with the movie studios who wants to force everyone to wait months, after a movie has been released on DVD, before they can watch it digitally.

Then Netflix launched its services in Canada, with a cheaper subscription model than in the US. This angered quite a lot of people.

In response to that the CEO said that "Americans are somewhat self-absorbed" ...which didn't help at all. Later he had to publicly apologize to the entire US population.

Then they had some technical glitches, and they made some platform changes that didn't sit well with their users.

And finally, Netflix raised the prize of the normal subscription by 60%, while creating a cheaper digital only model. This also infuriated the majority of Netflix subscribers who didn't want to change.

Then yesterday, they decided to split the company in two. Netflix (Digital) and Quickster (DVD-to-mail), while in the process saying that people now need two accounts.

Netflix is the perfect example of a company doing the right things, for the right reasons ...but in quite a disastrous way. They are trying to have the arrogance of Apple without the aura of Steve Jobs' "stop fuzzing around, you know I'm right!"

But let's take a step back.

People are now asking, "is there a future for Quickster, the DVD-to-mail service?"

The answer is painfully obvious. No,of course not. It is not supposed to have a future. It is supposed to get out of the way so that Netflix can focus on the future.

We all know where the future is heading. DVD-to-mail is cumbersome, limiting in its use, and involves a lot of manual labour for all parties, and quite expensive to operate. While streaming is direct, live, works on any device (including your iPad), and once you are done, you don't have to ship anything back.

DVD-to-mail is dead and gone. The only question is, "how long will it take for people to shift to the new digital only format?"

When Netflix created Quickster they didn't want to create a new profitable business. To wanted to get the old people out of the way. They are expecting that it will die.

The problem Netflix had was that every time they tried to make their services more digital the old DVD world got in the way. Both in terms of technology and integration. In terms of employees and management focus, and especially in terms of feedback from their customers.

Netflix's only strategy is to persuade people to shift to digital streaming only. They first tried doing it by offering a lot of new and exciting things that was digital only (integration with XBOX, iPad, fancy personalization etc.) When that didn't work, they tried raising the price of DVDs and lowering the price of digital. And when that didn't work, they put the entire DVD business into a separate business unit- generally making their DVD subscribes lives difficult.

Don't be surprised to hear that Netflix is going to close Quickster (or possible sell it off) in a few years. It is all part of the strategy.

As Reed Hastings, Co-Founder and CEO, Netflix put it:

For the past five years, my greatest fear at Netflix has been that we wouldn't make the leap from success in DVDs to success in streaming. Most companies that are great at something " like AOL dialup or Borders bookstores " do not become great at new things people want (streaming for us) because they are afraid to hurt their initial business. Eventually these companies realize their error of not focusing enough on the new thing, and then the company fights desperately and hopelessly to recover. Companies rarely die from moving too fast, and they frequently die from moving too slowly.

I wrote an article about all of this two years ago, called "What You Should Plan, Do and Support." 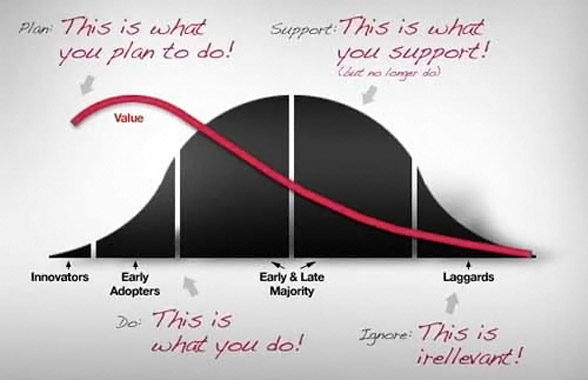 You should actively try to realize your future plans, test out new ideas, and create something for your early adopters to play around with. While doing that, you should spend even more time making sure that your early adopters and early majority have a great time with your new products.

You should also support the products you made 'yesterday,' even if they are no longer an active part of your strategy. Answer people's questions, provide tips and gently push them towards your new ideas.

Finally, you need to free up your resources, by saying no to things that no longer makes sense to use. This is extremely important, and one thing that most companies fail at. You also need to say no to old ideas far earlier than what you might think. There is no value in laggards, so you need to say no to them before you reach that point.

Netflix has now moved DVD into the "This is what you support, but no longer do" phase."

We can argue that Netflix should have treated their customers in a more graceful manner (and they should.) We can also argue if completely separating the two businesses are wise (personally, I think it will make it harder to convince people to change.)

But their overall strategy is the right thing one.