You are turning news into value, whereas other people just report it. You make it worth paying for! That is your skill. That's what makes you unique!

I was reading an article the other day that said that journalist student's won't pay for news. I don't get this. Why are you studying to become a journalist then?

Imagine if a car designer said, "I like to design cars, but I cannot conceivably imagine a world where I would buy one."

Would you hire a person like that? A person who don't believe that he would ever be able to create something of value? Something that other people are willing to pay for? Of course not, you only hire people who believe.

Why would a newspaper hire a journalist student who do not believe that you could make a difference?

I do understand the problem. The news industry today is a mess. We are in the middle of the shift. We are moving from being 'the bringers of news', because we didn't have news in the disconnected world, to be the creators of news in the connected world. Newspapers today are making the wrong product. They are still selling the stables that we keep our horses in, while the rest of us are driving around in cars.

But here is the thing. The old generation is not going to solve this problem. They are stuck in the old ways of distribution as a business model. They will end up like Kodak and so many other companies who never really changed.

The people who will change the world are the journalist students. It's you!

But it sounds to me like you have already given up, even before you left school. Why? Why don't you believe that you can make a difference? You are the digital natives!

When I also hear that most journalist students prefer print, and that your are working on a project that is about trying to recreate the past by producing a print newspaper without the use of digital tools, I get scared.

What are you thinking?

Here is my advice to you: Believe!

Imagine all the possible ways that you can make a difference. Imagine what you could do that would be so valuable and unique that other people would want to invest in it, to subscribe to it, to share, and to love it.

That's what Gutenberg did. That's what William Caxton, Frederick Koenig, Ottmar Mergenthaler, Tolbert Lanston, and John Baskerville did when they all invented print.

They didn't say, "I don't think anyone would ever be interested in this!" They didn't invent print just to get a job. They invented it to solve the problems of the past.

Today, the problem of the past is print itself and the print mentality, and we now need a new approach. A new solution. A new format. A new business model, and someone to come along and redefine what news is ...what journalism is.

That 'someone' is you! So get your freaking act together and start believing. Then start experimenting, and then make it happen.

If you decided to be a journalist just so you could have a 9 to 5 job, where you would look through the daily press releases and rewrite them into articles, you got a problem. That world is over! Brands now do their own reporting and connect directly with their customers. They don't need you anymore.

If you decided to be a journalist just so you could stalk politicians and ask questions, you got a problem. Everyone is doing that, and you will just become a part of an increasingly irrelevant gray mass. 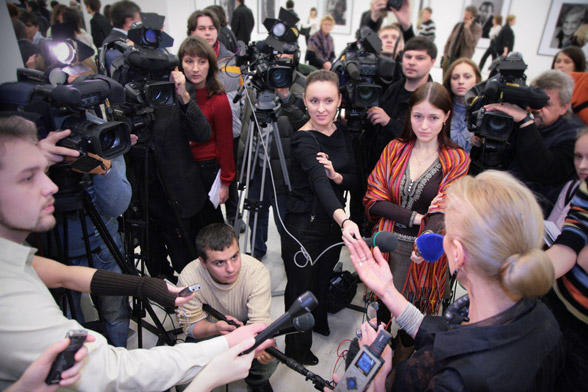 You have to be the creator of news because, in the connected world, the world itself is the reporter. We don't need 100 different reporters to tell us the same story anymore.

Free is not the solution. It has never been the solution. The only reason why Gawker is profitable is because they ask their journalists to write articles like "The Top Nine Videos Of Babies Farting And/Or Laughing With Kittens."

Is that what you want to do in your future? If you look yourself in the mirror, is that the what want to be remembered for?

The reason everything has been reduced to 'free' is that everyone is doing the same thing. There is no value in that. There is no distinction.

The future of journalism is brighter than it has ever been. The future is everyone, everywhere - connected to whatever it is you do that is so valuable that your audience just cannot live without it.

It's not going to be easy. In fact, I can promise you that it is going to get even harder than what it is today.

In the connected world, just being a journalist doesn't make you special. Anyone can be a journalist. It doesn't take any skills to write about that new product Apple or Samsung just launched.

What makes you special is not your title, but that unlike other people, the reason you became a journalist was because you believed in creating something valuable for others.

You are turning news into value, whereas other people just report it. You make it worth paying for! That is your skill. That's what makes you unique!