Oculus Rift and Facebook. Nobody Wins, Except the VCs

OMG... the animosity towards Facebook, Oculus Rift and Kickstarter is just crazy today. Let me sum it up for you. 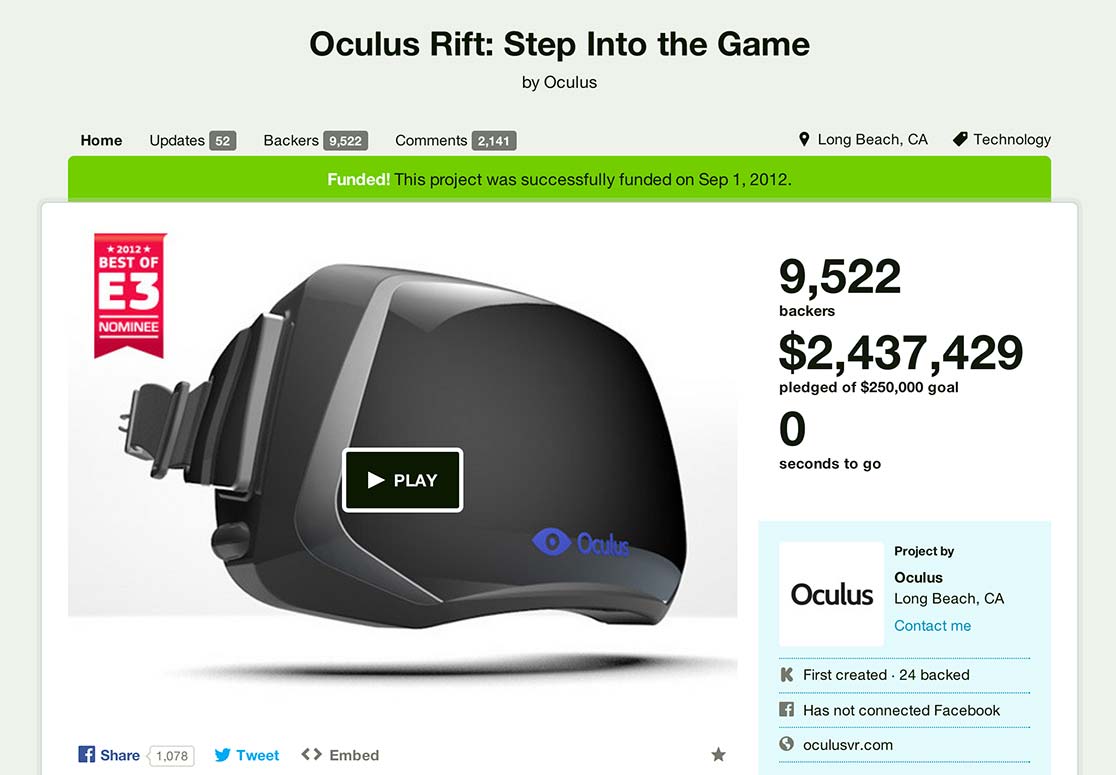 The company launched its development kit and starting working on ways to bring the product to market.

But, now that the Kickstarter community has turned this product into a super success (even though it hasn't launched yet other than as a dev kit), it caught the attention of the venture capital firms. And in Dec 2013, with the help of VC companies like Andreessen Horowitz, Oculus raised another $75 million.

Then yesterday, Facebook purchased the company for $2 billion, giving both the founders and the VCs a huge paycheck... but what about the people who made all this possible to begin with?

The Kickstarter backers were promised to help take 'gaming to the next level', but that's not what Facebook will be focusing on.

They were promised development kits to be a part of this future, but Facebook is notoriously bad for developers... so that sounds like game over.

And then Mark Zuckerberg hinted that the future of Oculus Rift would be advertising, and not specifically sold as a hardware gaming device:

Zuckerberg called out virtual reality as one of the computing platforms of the future - following desktops and mobile - and yes, talked about building Facebook's advertising into it. Specifically, he talked about the potential of a virtual communication network, buying virtual goods, and down the line, advertising.

Basically, he wants to add the two things real gamers hate the most: Advertising and in-app purchases. This is no longer a hardware device that you buy. What Mark is talking about is yet another 'rented' service. A social platform. The hardware is just the extra.

It's hard to say no to $2 billion. But they broke their promise of both what this was supposed to be, and what people had helped support. And neither did their original backers get a share of the $2 billion that Facebook paid. Sure, they got their Oculus development kit, but that's pretty much useless unless you believe that the device itself is going to be a part of the gaming experience you are designing for. With Facebook now owning it, hardcore gaming is not really the future anymore.

I did not chip in ten grand to seed a first investment round to build value for a Facebook acquisition.

It's not really surprising that people are pissed today. I'm happy for the founders of Oculus Rift, but this will be remembered as a sad day in the world of crowdfunding.