When I started Baekdal.com back in 2004, it was just a hobby. I was writing and posting stories for fun.

But it was only the beginning of my journey. I set a new goal to get 100,000 absolute unique visitors. It took a while, but I reached that point in November 2008.

I didn't really set any new goals after that. I mean, 100,000 people? This internet thing is nuts! For most of 2009 and 2010, I just focused on producing valuable content. I didn't care about the traffic stats. Some weeks I wouldn't even check it.

But by that time, my inner publisher have had enough of me just loafing around. I started to dream about taking it to the next level. So, in 2010 I drastically changed the publishing strategy, and how I defined the value of content.

By July 2010, the traffic had increased to 350,000 total visitors, and yesterday, something remarkable happened. I checked my stats as I do every day, and this was what it said. 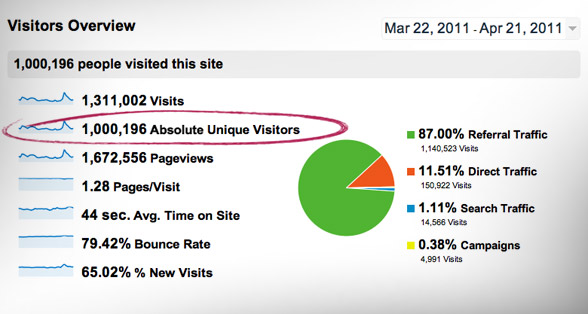 One million absolute unique visitors - almost all of them coming through sharing! Search engine traffic is a measly 1.11%

Note: A huge chunk of the direct visits are also coming from social channels. Read why in "Don't Trust Your Social Referral Data."

We seem to have convinced ourselves that we are living in the age of "social media" where citizen journalists are producing tons of great content and upsetting the balance of power in the media world.

I see a world of mass media where a few large media brands still control most of the media output and thus the conversation around the topics that they choose.

I do not know about you, but I am definitely seeing it!

We might not always write about the same things, but private citizens are increasingly reaching more people, in a much wider form of news coverage. We are expanding the very concept of news at an exponential rate.

Social media and blogs are not about the short head (the realm of traditional media). It is about expanding the long tail. Measuring the short head won't tell you anything.

The internet is just amazing. 10 years ago, it would have been impossible for private citizens to reach that many people in any context. Now you can!

Baekdal.com has come a long way in the past 7 years. It used to be a hobby, now it is a full-time business.

I cannot express how grateful I am to you, my readers. Without you, none of this would have happened. I only hope that I can repay you through the articles and stories I write.

Thank you all - one million times.

Note: I was thinking about buying everyone an ice cream on this sunny day, until I realized that it would have been hugely impractical - and cost several million dollars :)