Outsourcing Your Brain To The Cloud

I just saw the test questions for upcoming journalists from the Danish School of Journalism. In order for you to become a journalist (In Denmark), you will have to answer questions like these:

I don't know ...and neither does it matter. All people need to know is that sometime before anyone was born, we had a different form of Government. It doesn't matter if it was 178 years, 162 years...or whatever. It has no value to make that distinction.

Then we have the obligatory racist questions:

What nationality are the largest group of immigrants and descendants in Denmark after 1960?

I don't judge people based on what country they where born in. I don't put people into groups and react to them differently because of it. And quite frankly, I think it is a problem that the media keeps focusing on it.

What is the title of the song that contains the words ' ...Gøgen kukker i skov og krat. Vesterhavet og Kattegat ..'?

I don't know ...but after spending half a second looking it up, I found that it is a song from 1912. Which means that unless you are an old geezer, you wouldn't know either. But more to the point, the whole purpose of this question is to limit applicants to those who was brought up under a purely traditional Danish culture. You would have no idea if your parents have moved here from another country.

Oh and I just love this one:

Which of these ingredients are usually not included in Minestrone Soup? Eggs, Pasta, Tomatoes, or Cabbage.

What does that possibly have to do with my ability to become a journalist?

And what about this one:

The director of catering firm Gate Gourmet, Amanda Jacobsen, came under fire last year when she?

I actually do know the answer to that one, but what does the knowledge about a single person, in a news article last year, have to do with being a journalist in the future? Is it a test to see if I have read every single article the newspaper have written in the past?

There are many other questions, and most of them are equally irrelevant. But there are also a few good ones:

I don't understand why it has to be an *Argentine* winery, but too many journalists have a really poor sense of basic math. 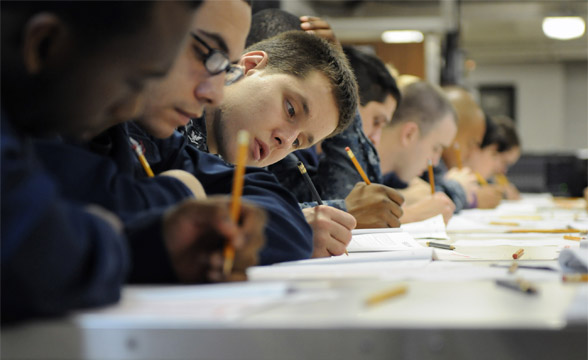 In 2011, media mogul Rupert Murdoch closed the newspaper "News of the World". What was the reason for closure?

Good question, which every journalist should know because it is a very relevant topic.

Note: And as always, the test itself was flawed. Several of the questions were later found to be incorrect. But hey, you are only required to answer 45% of them correctly, so accuracy does not seem to be that big of an issue.

My problem is that questions like these are based on a world that simply doesn't exist anymore. This might have been relevant in the 1700s, but in 2012, basing the future skill of a person on how good that person is to remember irrelevant nonsensical information is appalling.

It's basically asking people to play a game of Trivial Pursuit, in order to judge how good they are. This is not just a problem at the School of Journalism, it's a problem with any type of education.

But more to the point, two things have changed since the 1700s. First, we now live in the age of information overload. A time where the amount of information made available to us far exceeds our mental capacity.

Demanding that people should remember the recipe for a specific soup, or a single new story a year ago, is absolutely unacceptable. It illustrates that the people who created these questions, do not themselves understand the importance of focus and value.

The other change is that we now live in the connected world. We no longer have to remember nonsensical information. We can just look it up.

This entire idea that a person's skill is directly linked to what that person has within his brain, neglect to take into account anything that has happened in the past 20 years. We have outsourced the storage of irrelevant information to the cloud.

For instance, one question asked: "Which party is the Minister of Education from?"

I didn't know the answer. Here in Denmark, the Government is a coalition of three political parties, and I couldn't remember what specific party got that assignment. It's not relevant for me to know, so I have outsourced it to Google. If I need it, I can look it up.

And with Apple's Siri and perhaps, in the future with Google Glasses, this concept of outsourcing secondary information to the cloud will become common place.

This entire purpose of locking people into a room, disconnecting them from their cloud-based brain, and asking them to answer 50 random and irrelevant question is passé.

When I tried taking the test just for fun, I only scored about 65% correctly. But if I could use my 'cloud-brain' I would have scored 100%, and I would have been able to do it faster.

We now live in the connected world. Determining a person's skill is not based on how much each individual can remember, but instead how good we are at crowdsourcing with the world around us.

Your brain is not a place of solitude anymore. It's connected!