Preparing to Win the Future

I want to show you something fascinating that publishers can learn a lot about.

Imagine that you are a big oil company and you start to see that the future is going to change. What do you do?

Some companies try to fight the change, lobby governments and elect a president who wants to make coal great again. But that clearly is a stupid thing to do, because the future doesn't care what you want.

In the case oil and coal, the future trend of renewable energy promised a cleaner, more flexible and a cheaper future, and because of that it simply doesn't matter how much you want coal or oil to exist.

So what do you if you are a big oil company? The answer is that 'you become the future'.

Let me give you a couple highly inspiring examples.

First of all is Örsted, which used to be called Dong Energy. This is Denmark's largest energy provider, and it used be run on natural gas and oil. But now it has redefined its future focus on being the leader in renewable energy.

And just take a look at this video. It's absolutely wonderful:

But it's not just Örsted that is doing this. Another big oil company is the Norwegian Statoil (meaning 'state oil'), who is now spearheading the future of massive floating windmills.

The amazing thing about these windmills is that we can place them anywhere we like ... like in the middle of the ocean and out of sight of any people.

Or what about this fancy thing I came across over at Twitter: 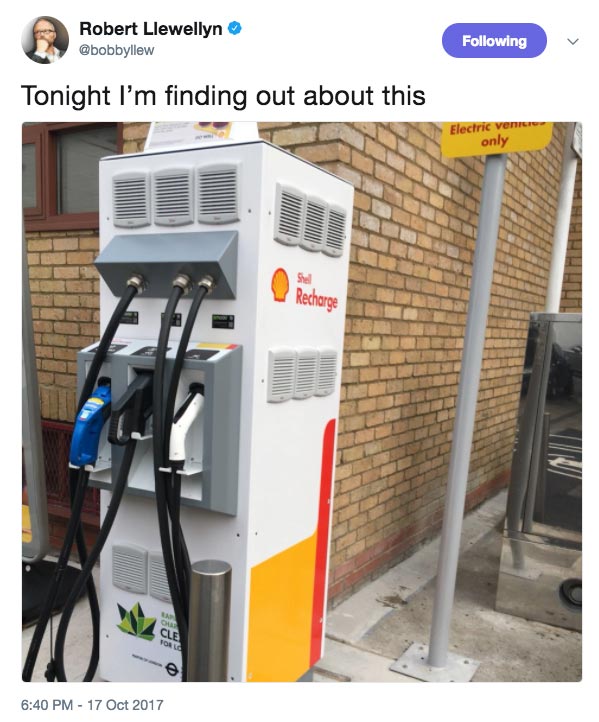 This looks like a normal petrol filling station from Shell, but it's not. Instead, it's an electric car recharging station. Because, obviously, the future is not going to be about filling up people's cars with petrol anymore.

Note: For those interested, here is a behind the scenes video of what Robert saw that day, .

What's really impressive is when we start to look at this on a countrywide scale, and again, here we have to look at Norway.

Norway is a very rich country because of its oil, but instead of using all that oil itself, it has decided to just export it to other countries, and then use all that money to make Norway the most modern country in the world.

We see this very clearly when we look at the adoption of electric cars. Norway is miles ahead of everyone else. In 2016, Norway had 21.5 registered plug-in cars per 1,000 people ... which is more than 14 times than in the US.

Here is a great video by VOX that explains it all:

Some people think it's a bit pathetic that Norway is basically creating a modern sustainable society using money from oil, but that's the wrong way to think about it.

Because what Norway is really doing is to spend all the money from the old world, to make sure that they come out as the winner of the new world.

When everyone else finally starts to realize what needs to be done, Norway will already be there.

And remember the examples I showed you earlier about Statoil and their amazing floating windmills? This too are currently being partly subsidized by exactly the same wealth fund.

So, even when all the oil runs out, Norway will own the future of renewable wind generation.

Now, why am I telling you all this?

The reason is that this is a perfect example of how old companies prepare for and wins the future. And it's something that is severely lacking in the media industry.

Think back to the Örsted example I started out with. This used to be an oil company, but now it's an entirely different type of business.

Imagine if we took that concept, and this amazing change of purpose, and applied that to the media. Imagine if you are a big publishing company with 50 to 100 magazines and newspapers in your portfolio.

What would your equivalent to this level of change be? Would it be to post a few more articles online while optimizing for low-intent snacking on Facebook?

No, of course not. Because if that's all you do, you haven't really changed at all. Instead, it's to redefine publishing.

For instance, if you are a fitness magazine, your future might not be to write 14 articles per day about random fitness related things, but to become the new platform for health. A platform that forms a connection between the healthcare industry, your day to day well-being, etc.

Or if you are a business magazine, your future might not be to just provide people with the daily business news, but to become the next generation business intelligence and data provider.

And I could come up with many more examples.

But the problem is that most publishers aren't doing any of these things. Publishers are so obsessed with tiny tweaks as a response to changes in the moment that we never really change anything at all.

Publishers are not challenging their very purpose or their role. They just keep publishing more content.

So think about the future 10 years from now. What are the big changes that you need to win? And what change of purpose do you need to do to make that happen?

If you liked this article, read "We Need to Drastically Rethink The News Startups" (26 pages), or sign up to my newsletter to get even more media insights.