We have to rethink the role of media subsidization by Governments. Either move it to infrastructure, or use it to facilitate the future business models of news companies.

In many countries, there is a growing debate about how much (or how little) the Government should do to save newspapers. Here in Denmark (where I live) it's no exception. But it seems to me that they are all discussing the wrong thing.

In Denmark, the Government's media subsidization amounts to DKK 400 million (which would be roughly GBP 460 million in the UK, or USD 3.7 billion in the US, when we adjust for differences in population size).

On top of this, in Denmark we also have a similar system to the BBC television license in the UK, where every citizen has to pay a 'media' tax if you own any form of media (including a computer or tablet). The total media tax amounts to roughly DKK 5.7 billion (that's GBP 6.7 billion or USD 54 billion, adjusted for population sizes).

What this means is that every citizen above the age of 19 is forced to pay roughly $235 per year in taxes. Money that is then channeled into the media industry in the form of Government subsidizations.

That's a huge amount of money that the Danish Government is giving to the media industry.

So these days there is a debate going on about who should get the money. The way it works today is that the money is largely given to print newspapers above a certain size. In short, to all the old traditional newspapers.

But our Minister of Culture wants to change that. He is saying that the money should not be limited to print. He wants to change the rules so that it looks at production instead of how it is distributed. He also wants to lower the bar for who can get a share of money and use it to support the new innovative forms of media. Basically, he wants to use the Government's media subsidization to encourage change, rather than try to save the old.

What a brilliant guy! 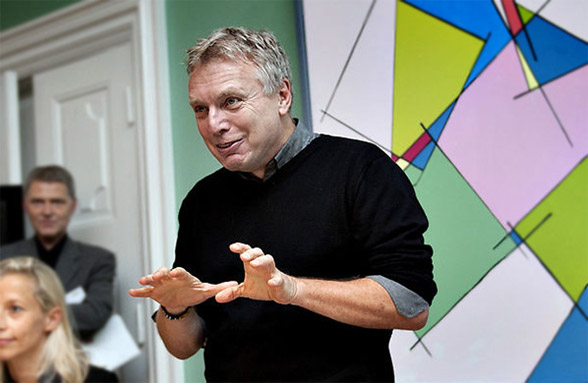 What an old geezer!

Note: The scary part for me is that I have been a Conservative Party voter for most of my life... until today.

The problem here is that the debate is not about relevant things like the quality of journalism. It's all about what material it is on. That's just wrong. And the same debate is going in many other countries.

The subsidization of media is of course a relic from the past. It makes no sense to subsidize the media in an era of the internet. The politicians are saying that newspapers are important for democracy, because that was indeed their role in the disconnected world. But today, that role has been replaced by the connected world, in which everyone is a protector of democracy.

One good example of this is the case of SOPA/ACTA, in which the media failed to protect people's rights for democracy because they were just 'reporting'. It was instead up to the connected world to create a strong enough voice via many different channels, in order to force the politicians to change their support.

This is the world that we live in today. The 'connection' is now our protector of democracy (or whatever you want to call it). It makes no sense to subsidize only one form of media, whether it is print or digital.

Here is a simple example posted by @nowthisnews: 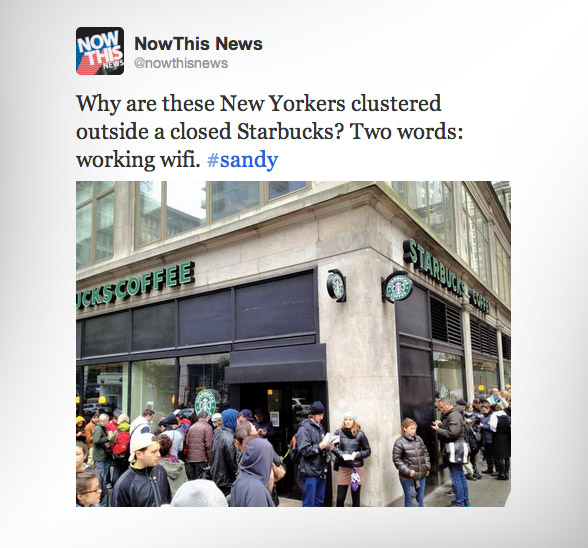 In case of a crisis, what people need the most is not a newspaper. It's a connection.

The Government should stop giving money to the media and instead channel it into facilitating a connection. Meaning, instead of giving the money to traditional newspapers, channel the money into the infrastructure of the internet itself.

It would be much more beneficial for our society if our respective countries had high-speed, ever present internet. That would facilitate a better connection between people, and a stronger voice by the public.

It would also benefit the media. Having high-speed internet everywhere would lower the cost and facilitate a change in how we communicate and connect. Just look at the cost difference between the internet natives and the traditional press (when covering the same story).

For instance, back in 1927 it made a whole lot of sense for the UK Government to form the BBC. Back then, we lived in the disconnected world and it was important for the future success of the UK to make sure that their citizens were informed and up-to-speed about world events. Just look at the difference between North and South Korea as an example of what happens when you don't facilitate the availability of knowledge.

But we don't have this problem in 2012. The internet keeps everyone informed 24/7. For instance, I probably spent a couple of hours today watching the devastation of Hurricane Sandy, as well as talking with friends who live in the middle of its path.

Why give more than 5 billion to a few media companies, when you can spend it on giving every citizen cheap access to high-speed internet, wherever they are? An internet where they can connect with millions of news sources from both established and new media companies (as well as the growing number of social sources), facilitated by people who are where things happen.

We need to focus the money on the connection between sources and people, rather than on a few selected media companies.

Now, I don't expect this to happen. The media has a too firm a grip around the balls of every politician. We see this with how the leader of the Conservative Party tries to protect print, and we see it in many countries in Europe where the newspapers are trying to put a tax on digital media. Either by putting a tax on Google, or taxing our internet connections as proposed by The Guardian.

We are not actually moving forward at the moment.

But if we are to subsidize news, can we at least shift the debate to the work of the journalists? Think of it like this:

If you walk into any newsroom you will notice that every single journalist is writing their stories digitally. They are all sitting in front of their desktop or laptops ... some are even using their tablets. 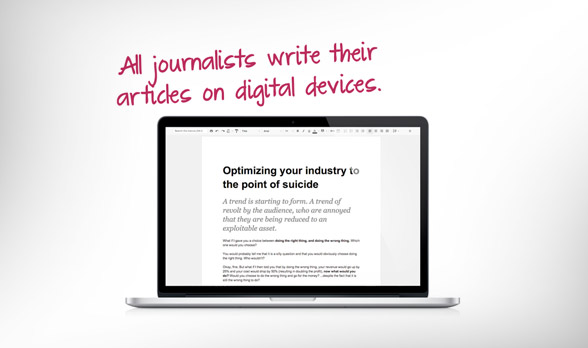 So when the media and most politicians say we should save print, they are actually saying: If you print out your article you get money from the Government, but if you post it digitally you don't. 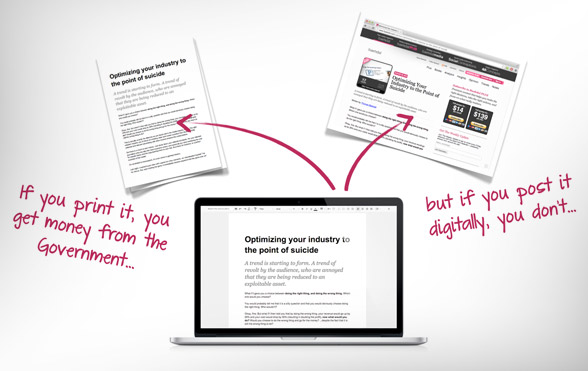 That just makes no sense. Why is an article suddenly essential for our democracy if you print it out, but not if you post it online? It's the same article. This entire debate has been completely sidetracked.

Can we at least get back to debating the value of the journalistic profession, instead of focusing on what button the journalists push? Focus on what the journalists write. Support the creation of valuable content, and not what material it is outputted on. 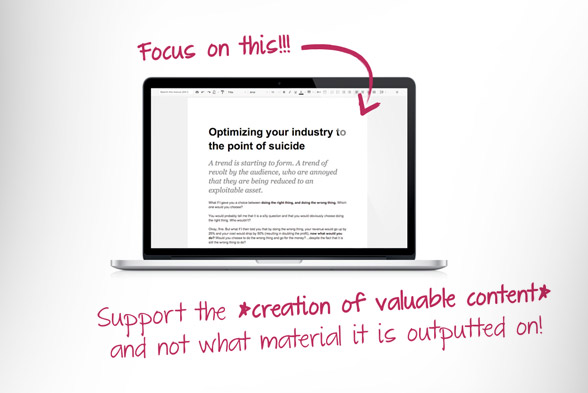 Specifically, we need to focus the media subsidization on four criteria:

Now, several newspaper executives are probably going to say that I'm wrong for a whole bunch a silly reasons. But here is the thing...

The New York Times' digital advertising revenue dropped by 2.2%, and even Google saw a drop by 15% on a cost-per-click basis. What's happening here is that the long tail of the internet is outpacing the growth in digital advertising.

While digital advertising as a whole is growing, the number of publishers taking a piece of the pie is growing even faster. The result is a bigger market overall, but with less money for each media company.

In the future, publishers must find another primary source of income, and subscriptions is one of the obvious places to look.

How do you get people to subscribe? Well, you create unique content, of high-quality, which will influence people in their daily lives, over the long term.

What I'm proposing here is not just the whims of a digital native. We have to change the debate so that the solution is aligned with the future needs of the industry.