Reuters Next = Reuters Past

Reuters have cancelled their ambitious project called 'Reuters Next'. And what a sad decision that is. The purpose of Reuters Next was simple. Change Reuters from being a B2B news company who produced wire news to sell to other newspapers and turn it into a direct news services connecting them directly with you and me (the reader).

The thinking is obvious: We have all these reporters and editors (over 2,000 in Reuters' case), all around the world, and we're producing all these stories and videos and photos - can't we figure out a way to get them in front of readers and viewers without a middleman?

It was an obvious move. The old newspaper structure is crumbling, and the need for small individual papers is reduced and replaced by consumer-centric news behemoths (like the NYT and Guardian). Going direct is critical to any news organization's success in a connected world.

But it was not to be. The internal friction within Reuters proved to big. 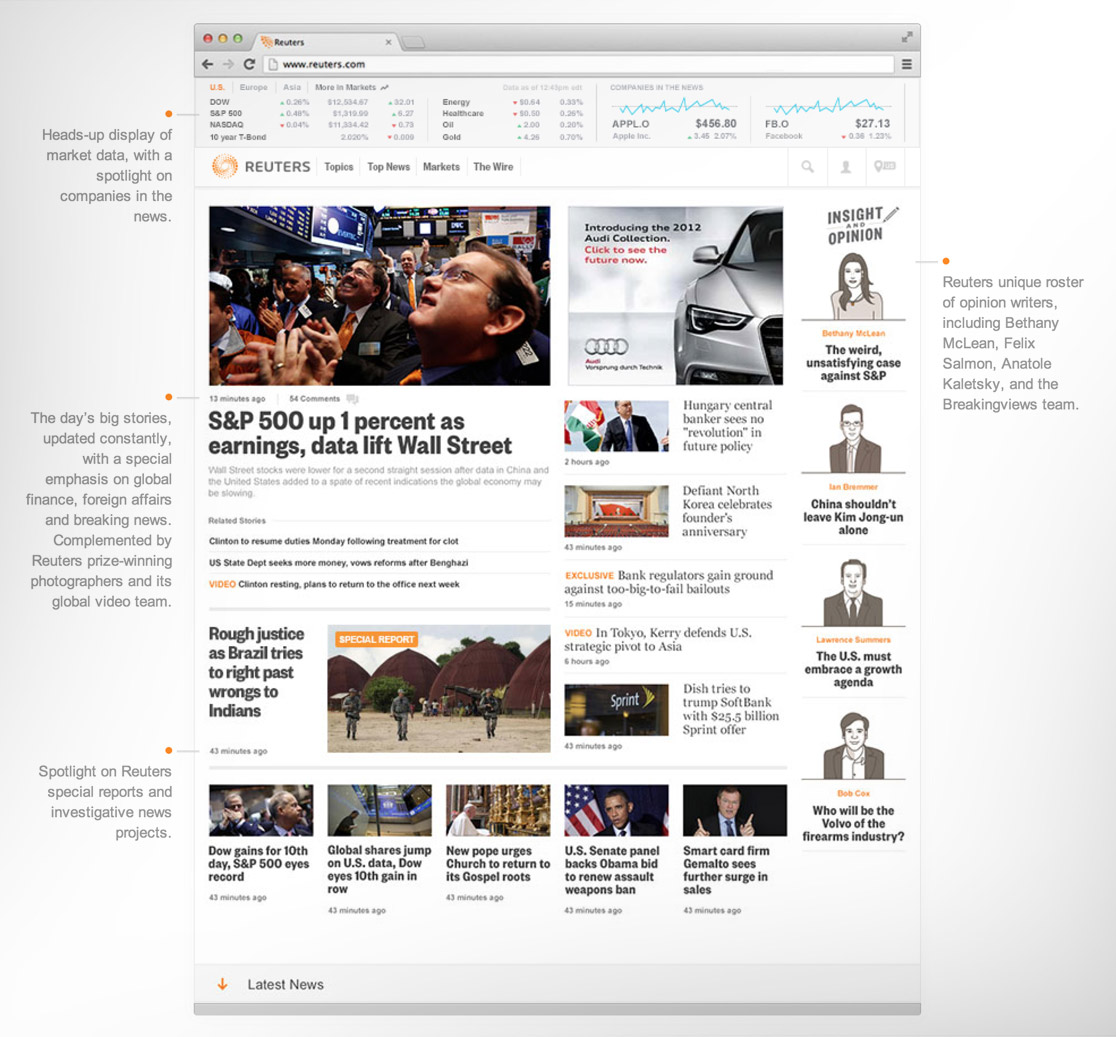 Reuters Next died, these sources said, because of an ugly meeting of corporate politics, a lack of direction and the realization that money is more important to Thomson Reuters than consumer-focused news.

The project was marred by a serious lack of direction, serious infighting between groups, and outside consultants and technology being relied on versus internal organization.

Not to mention that, like most change projects, it lacked overall exec backing and was only held together by a single person.

After many reorganizations and personnel changes, the tipping point came when then-Digital Editor Chrystia Freeland left Reuters and announced in July she would run for parliament in Canada.

"Losing Chrystia was the end because she was the leader" an insider said. "She was the board connection; she was fighting for us, she was the one really making it happen. Without her there was no one with enough clout to fight within the company, to fight off against all these groups who didn't want us to succeed, didn't want this project to happen.

As they write: "She was fighting for us". That's only something you do when the company itself don't want change to happen.

So what will Reuters do now? Well, they will put their focus back on their old site and refocus on their core strengths.

Next is a long way from achieving either commercial viability or strategic success. In fact, I believe the existing suite of Reuters.com sites is a better starting point for where we need to go," Mr. Rashbass wrote. "Therefore, I have decided to cancel the Next project and put our efforts into enhancing and improving the existing Reuters.com sites. We will repurpose as much of the Next development work as we can for that.

I know this will feel somewhat 'Back to the Future,' but the existing Reuters.com has many strengths, which I recognize coming from the outside that perhaps people here take for granted.

In other words. He is giving in to the friction.

All of this reminds me of Kodak. Once an amazing company that was both innovative and forward thinking, but then the market changed. And while many people at Kodak saw the need for change, the internal friction was so high that they became incapable of moving.

Kodak launched several interesting projects. For instance, they were the first to implement Wi-Fi in their cameras (and what a great idea), but the friction turned all these great project into niche areas with little overall backing or vision.

This is what is happening at Reuters. They still see the need for change. They still understand that their old business model is failing. But the internal friction is preventing them from truly risking doing something new. Instead, projects like Reuters Next had to fight for it's survival, and waste all it's time on internal lobbying rather than actually getting things done.

I don't know if Reuters Next would have been a success. The concept was great, and the purpose of it was just what Reuters needed. But it also had a number of structural problems. For one, the concept of giving people a 'river of news' is not actually what people want, even though the idea of automatically creating sections by topic was brilliant (what we in the blogging world calls 'tagging'). But the real problem was that it was never given the chance to really succeed. 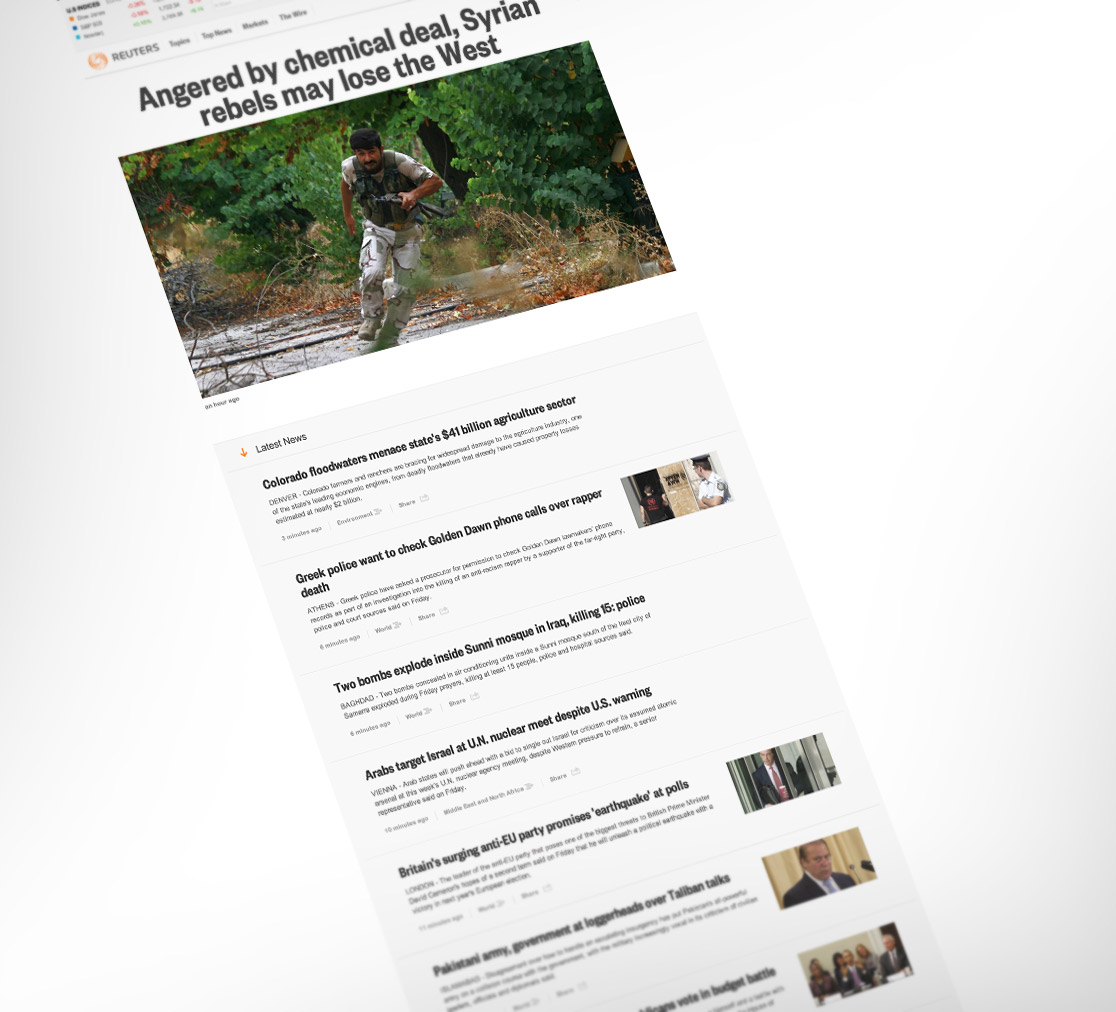 Reuters is a great company ... but it's behaving more and more like Kodak. And It's now also faced with the problem that the most prominent forward thinking people have left the company, leaving behind those who created the friction in the first place.

In many ways, I also think this tells the story of how I believe most newspapers will fail. We see the same pattern in most newsrooms. Their internal friction is so high that the change that they do make is limited to making iPad apps that remind you more of the old print model. And over time, just as it happened at Kodak, this friction will kill them ... one by one.

This is also why I think the future of news is going to come from somewhere else. In the shift I wrote about how our media world is merging, but in reality, what we are seeing is that the old media industry is fading out.

There are a few exceptions, of course. But the future of news won't come from the news industry. The internal friction is simply too high.