Excuse me for a moment, but I need to scream! A new study is out from PEW looking at "How social media is reshaping news", and it makes every single mistake possible.

First, it ignores the actual behavioral changes between traditional news sites and social sites. Nobody is turning to Facebook for 'news', it just happens anyway because of sharing. The behavior between a person deciding to visit a newspaper site and one visiting Facebook is completely different (one is targeted, the other is not).

If something bad happens in the world, nobody thinks "I will go to Facebook". Instead, people turn to place where they know the news will be. That's the difference. True a lot of people get news via Facebook, but it's untargeted. 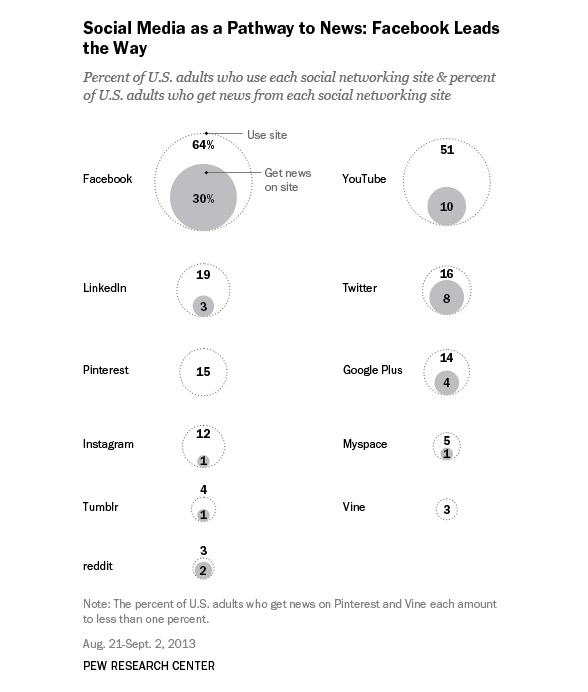 So the challenge news publishers are faced with is not news itself (changing your editorial to make it more snackable won't change this). The challenge is that you are trying to take a targeted concept and make it compete with an untargeted form of distribution.

And if you try to solve that by making more and more of your targeted news untargeted to make it 'work better on Facebook' (like many so-called experts propose), you lose.

Secondly, they are still defining news in a completely different way than what news actually is. News is not just the topics covered by newspapers. News is everything you didn't already know. So it's not 30% that get news from Facebook, it's 100%.

Same with what people do. It's not 14% who have posted a photo from a news event, because everything they post is a news event. It's just not a generalized 'mass-market' news event. 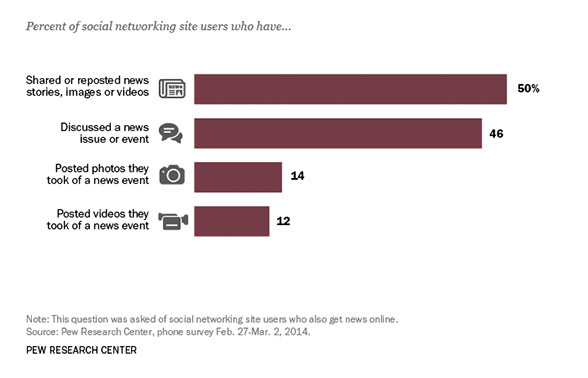 The transformation that is happening is that news is now everything and everywhere. Stop defining news is this incredibly narrow way. It's misleading you away from your real challenges.

Then we have the graphs illustrating that 'direct traffic' is more valuable than traffic from Facebook or search. This too is completely neglecting to understand how people actually behave. 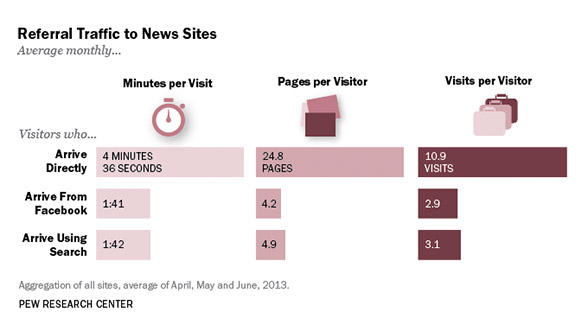 I have written about this many times before. When you share a link via social, you will end up with analytics that indicates that most of that traffic didn't come from social. This is due to how things spread, how we use multiple devices, how we are influenced by one thing but act in another, and just plain old faults in how analytics is measured.

Nobody did that. Nobody!

But if they look at their analytics, I can guarantee you that a substantial part of the referrals to that page is reported as 'direct'.

Comparing direct traffic to social traffic is like comparing 'last-click' to the 'full path'. Obviously, traffic caused by a more complex path is more valuable than just the last click from one source.

Direct means: We don't know how it happened, how many paths it took before people came, or the number of deliberations people committed to it beforehand.

Direct traffic, of course, can also in some cases mean 'loyal'. But you cannot measure that as a last-click referral (which 'direct' is). People don't just become loyal out of the blue. In fact, loyalty is the result of a complex path of interactions prior to the last click.

And again, if this 'direct' traffic is leading you to a URL that nobody would type in manually, you cannot assume it's based on loyalty at all. It's far more likely that this traffic is caused by other things, but your analytics just wasn't able to identify it. Hence, it's unknown.

One graph that is slightly interesting, though, is what people do on Facebook.

I say 'slightly' because there is nothing new here. Facebook is the modern equivalent of 'what people talk about', and that is a trend that hasn't changed for thousands of years.

There is nothing new here. Nothing for you to learn.

It's not like you can say "oh, people want more entertainment, so we should focus on that!!", because why didn't you then also say that in the 1980s?

Granted, in the 1980s, we had the problem of distribution, causing only a few types of media to be possible (one-way mass market publications). Which in turn put much of the focus on general purpose newspapers with no personalization or connection to the individual.

But why do you think Hollywood is making movies based on fantasy rather than on real-world documentaries?

But the key to any good publication, which is especially true today, is to target what you do. If you just create a random publication with 73% entertainment, 57% sport, 51% crime, 46% health, 42% weather, 39% international news, and 31% business, you end up with exactly the same non-targeted mass-market newspaper focus that is currently struggling to survive.

How does that help you, exactly?

Facebook can make this work exactly because it's adding personalization to the mix, but using the signals of others.

Please stop making studies like this one. It's completely misleading.