There is a new study out about how people consume news by the American Press Institute, the Associated Press, and NORC at the University of Chicago. And like so many studies before it, it paints this all for familiar picture: 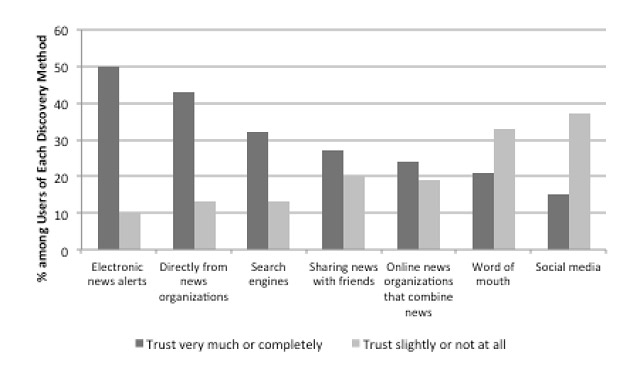 It then uses these findings to say that "Social media isn't replacing traditional news outlets at all". I'm sorry, but they are missing the point of what has happened in the past 10 years. If you define news in the incredibly narrow way of "news being reported to you by others" then yes, this graph is probably true. But that has nothing to do with the trends of the connected world.

To give you one example. I really want to stay up-to-date on what, for instance, Google Analytics is doing, not only because I have several friends there but also because I'm an analytics geek myself.

So, where would I get this news?

It's the same when it comes to other areas of interest. Would I rather learn about food from +Jamie Oliver, or from a journalist working at the Guardian writing about something Jamie had done? Again, I would prefer to hear it directly from Jamie.

So studies like this one are irrelevant. They still don't realize the transformation that has happened in the past 10 years in terms of news. When they ask people about news, they look at the very specific genre of non-targeted, generalized, mass-market form of reported news. They don't understand that the real world of news is now much, much bigger, and that truly relevant news is all completely outside the scope of what they are studying.

Imagine if they had asked: If your favorite brand were to release a new product, who would you prefer to hear it from? Newspapers or directly from the brand? Who would you trust the most?

We trust those we feel connected to and we are skeptical about those we are not. In case of news stories about Ukraine, for instance, there is so much conflicting information that we don't trust anyone directly, so we turn to newspapers hoping to get a more nuanced view.

So in terms of non-targeted generalized news, traditional channels still dominate, but the trend is that this area of news is rapidly losing its influence, while a much wider scope of connected news is growing in individual importance.