Last week I published the article "Debunking StumbleUpon", in which I illustrated just how little value StumbleUpon's traffic produce. After publishing that article, several people pointed out that StumbleUpon might produce low value traffic, but its sheer traffic numbers help my search engine ranking. Or, as we say in the industry. StumbleUpon is producing Google Juice!

This is an argument I have heard many times before. Many SEO optimization "experts" point to Stumble as a traffic driving "engine". Sure enough, it does drive a lot of traffic but, as I wrote in last week's article, what's the point if isn't valuable to you?

More to the point, why would Google rank your site higher in the first place? They would have to include StumbleUpon as a special site, measuring not just the link itself, but the view and Stumbles that StumbleUpon records for each URL - and then give that a disproportionate higher value in relation to the search engine listings.

It might be that is useful for small unknown sites with an already low PageRank, but I don't think it's caused by the activity on StumbleUpon. Its probably just the effect of normal link exposure.

I don't really know, but I would be very surprised if Google valued StumbleUpon links higher than identical links on other sites.

What I do know is that, if I look at this site, StumbleUpon is definitely not producing any Google Juice. To illustrate this, I looked at the total amount of traffic from both StumbleUpon and Google Search for the past 4 years. 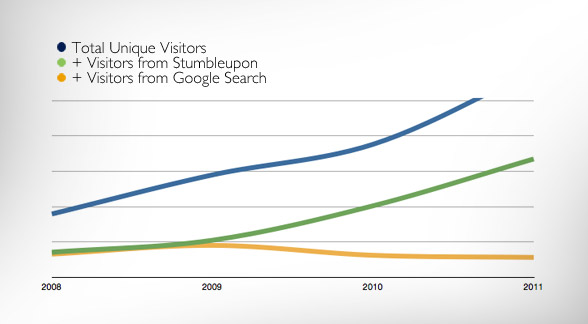 As you can see, in 2008, StumbleUpon and Google Search referred about the same amount of traffic. But as StumbleUpon grew in popularity, Google Search actually dropped. Not only that, but my PageRank also dropped from 6 to 5 in 2011.

But, I don't think the drop in Google Search is caused by StumbleUpon. I think it is only natural that the search volume is dropping. In the past, search was how we discovered the internet, but the internet that we know today is allowing us to connect in many other ways. We have social sharing, microblogs, and many other channels that people can use to connect.

In 2004, Search traffic amounted to roughly 33% of my traffic. In 2011, it had dropped to 13%. And I'm seeing no indication that StumbleUpon has any effect on search rankings or volume.