Note: This article is written in collaboration with a friend of mine, Hans Tosti. He is a great guy who is teaching people about new media every day. You can read more about him at the end of the article.

Apple is one of strange companies that always seems to defy how something is supposed to be done. One example is when they are hosting their Keynote events like the recent one announcing the iPhone 4GS. The right thing to do is to stream it live for everyone to see. But Apple isn't doing that.

They are "still" doing it the old fashion way of inviting the traditional press to a press-only event. The rest of us then have to sit around trying find the best unofficial live stream. Like the ones from Engadget, MacWorld and others.

Why are Apple not live streaming their events? They know people want them to.

The special thing about Apple is that they have a higher level of user engagement than most other companies. We saw this illustrated clearly when Steve Jobs sadly passed away last week. People started flocking to Apple's stores. Not to buy, but to mourn.

When was the last time you saw customers leaving flowers outside your store because your CEO died? 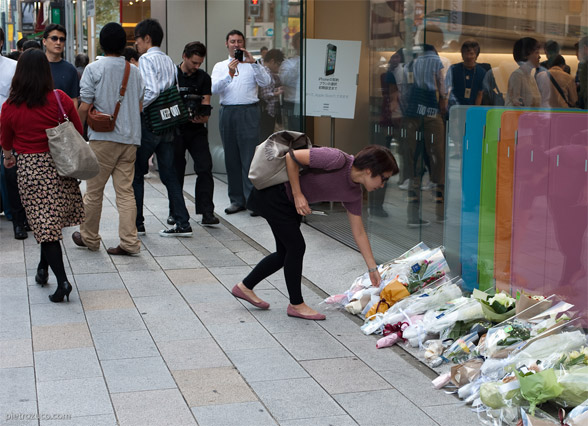 This is the reality of Apple. We are not just customers vs. a brand. Apple is our identity, and as such the rules of engagement change. The way we interact with Apple is beyond the standard marketing thinking.

When it comes to Apple's lack of live stream, we have to think of this relationship and ask, is public streaming the right thing to do? Do we actually prefer it to be closed? Is not communicating to all a way for the rest of us to feel more apart of it because we communicate it for them?

Obviously, there are two elements to this. One is the media industry interests, and the other is how we as people communicate about Apple.

Apple has always been a very traditional company when it comes to the media. All their marketing is focused on the traditional channels, mostly in the form of TV commercials. Their events are press only, and they favor a select group of influential journalists and media companies, which they support in a big way.

People like Walt Mossberg or Andy Inatko from the Chicaco Sun Times and others. On many occasions these people and media companies actually get to test the device before launch (under some very strict rules of non-disclosure.)

While Apple to many is seen as arrogant towards the media, they are actually doing a ton of work trying to please and influence the big publishers.

From a journalistic perspective, having Apple live stream their keynotes, undercut the relationship Apple has with the media.

If everyone could just watch the live stream directly, why visit the media for news? And also, during the event, the media sites are skyrocketing with traffic. We all noticed with the Keynote event here in October, where many media sites simply broke down because of the enormous amount of exposure.

If you could just see the event live from Apple, the media sites would get no traffic for the one and a half hour the event takes place. And afterwards, people would again have no need to visit e.g. the Wall Street Journals, because we already know what happened.

Putting up a live stream also drastically increase the pressure on the media companies to be "the first ones to report it." You really cannot beat live, so you can never be the first.

In Apple's relationship with the media, neither the media, the journalists, nor Apple has any interest in streaming the keynote live.

In fact, one might argue that by not streaming it, Apple might actually get more exposure as people click around and share what they find. Something you cannot do with a live video stream.

Let us also not forget that Apple is pushing very hard to convince big publishers to adopt the "Apple Newsstand." The place where you would go to find "newspapers and magazines" on the iPhone and the iPad. Apple has a very high interest in making sure the big publishers are happy.

From a journalistic perspective, especially for a company like Apple, not hosting a live stream makes a lot of sense.

The journalistic perspective is, of course, only a part of the story. The other part is how Apple is putting you, as an Apple consumers, in control of spreading the word to the world. How they make you their spokesperson.

In a social media perspective, Apple is quite a paradox. They don't do much on Facebook, Twitter or any other platform, and Obama is probably easier to catch on social media than Apple's Customer Care. Nevertheless social media is by far the most important marketing tool in the box!

Knowledge that is hard to get is cool to share. It supports our personal brand, and it energize conversations between like-minded individuals. People who love Apple, and share the company's values and beliefs, get a kick out of sharing news about them. Let's just call them "Apple evangelists."

When Steve Jobs entered the stage, he created a great show! Apple provides a cool setting, a casual but very value-laden story that is telling us about the company, their business achievements and, of course, their products.

The way new products are introduced by Apple is very impressive from a rhetorical point of view. The technical details and benefits are served with loads of use cases and "soft" and emotional statements. Everything is prepared and ready for you, the Apple evangelists, to share and preach on your personal social networks.

Apple is providing with the all you need to make that right statement about them. One example is when Phil Schiller said, "You know how hard it is to make a Squirrel stand still?" That is the perfect sentence for you to write some really witty Facebook status updates. 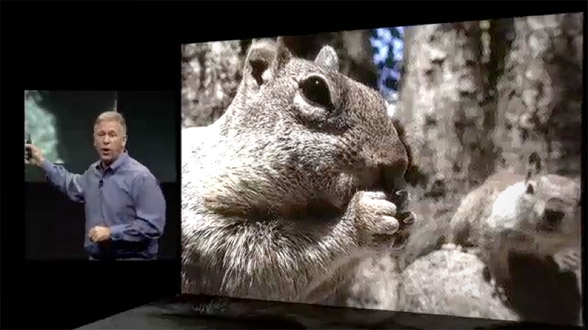 Another example is when Phil mentioned the speed of the new camera. Showing the that the iPhone is twice as fast as the Androids. Again if you are an Apple enthusiast this is the perfect moment for you tweet, "OMG the iPhone 4S's camera is wicket fast!"

This exactly what happens every time Apple has one of their keynote events. This Tuesday was no exception, although most people wanted them to launch the iPhone 5. Not many evangelists actually stated: "I want the new iPhone 4S!"

Twitter and Facebook are flooded with information and opinions during launch events. Apple evangelists want to underpin their personal brand as innovators and first movers, and take great pride in being the first to spread the news on social media. "It has an 8 MP camera!." "You can actually talk to it! I so much want a HAL-2000 theme on it!." "iPhone 4S is out this month!."

This is very important to Apple. Brand evangelists are often perceived as a much more trusted and reliable sources of information than "the salesman wearing jeans and turtleneck on stage in San Francisco." Their influence on their friends is significant.

Several months before the product launch social dynamics and conversations occur in social media and online press. Speculations about upcoming products and next generations of e.g. iPhones. Things get hyped, but sometimes over-hyped. This week's disappointing reaction on the iPhone 4S is very much a consequence of, perhaps, too much talk and speculation based on some random Chinese manufacturers of accessories "leaks" of cases supposedly made for an iPhone with a 4 inch screen.

But, we're totally confident that tens of thousands of Apple evangelists will be ready and fired up for more next time Tim Cook will "address the church", and that's why we probably won't see Apple live stream from their events nor allow TV to live broadcast. Social mechanisms are way to extraordinary to be traded with mass media communications.

And don't we all just love it?

About Hans Tosti, Senior consultant and evangelist at Komfo. Community manager supporting, amongst others, one of Denmark's best selling recording artist, Tina Dico. Follow me on Twitter.