The Future of Interactive Glass

I love it when companies create "future visions" videos - like this one from Microsoft, or these from Penguin (ebooks) and Goab (TV). This morning, I came across one from Corning...and it is spectacular!

Corning is a glass manufacturer, probably best known for it's Gorilla Glass that Apple uses to make their iPhones and iPads ultra tough. But as you can see in the video, Corning wants to do much more than make Gorilla glass (see video below). 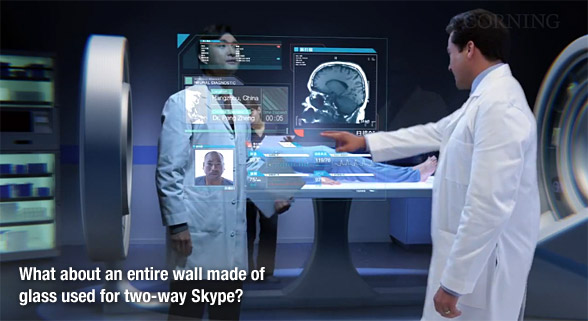 One thing I particularly like is that, unlike most other future vision, Corning seems to 'get it'. Most other brands seem to have this idea that we will have separate computers in every room. A computer in your bathroom mirror, in your refrigerator, in your living room table, in your closet door, etc.

But just imagine the nightmare of having to manage all those separate computers. Not to mention, how would you persuade app developers to create separate apps for your bathroom mirror? It is hard enough just to convince developers to make apps for Windows Phone 7.

It is the old time thinking, back from the days where computers weren't connected in a mobile form factor. But Corning 'get it' because they are saying: No, you will not have a computer in every room. You will have a display everywhere, but it's your tablet or smartphone that is powering them.

Finally! This is exactly what the future will be like (in my opinion).

Note: I wrote more about this in: Debunking The New York Times Interactive Mirror.

So, enjoy your day with these inspiring videos. And Corning ...please, oh please, give me one of those full screen walls!

2012: A Day Made of Glass 2 (Expanded visuals version of the same video)

A similar video they made a year ago.