Have you ever wondered why we haven't been visited by aliens from another planet yet? Well... it's probably because they read the news. Just look at this: 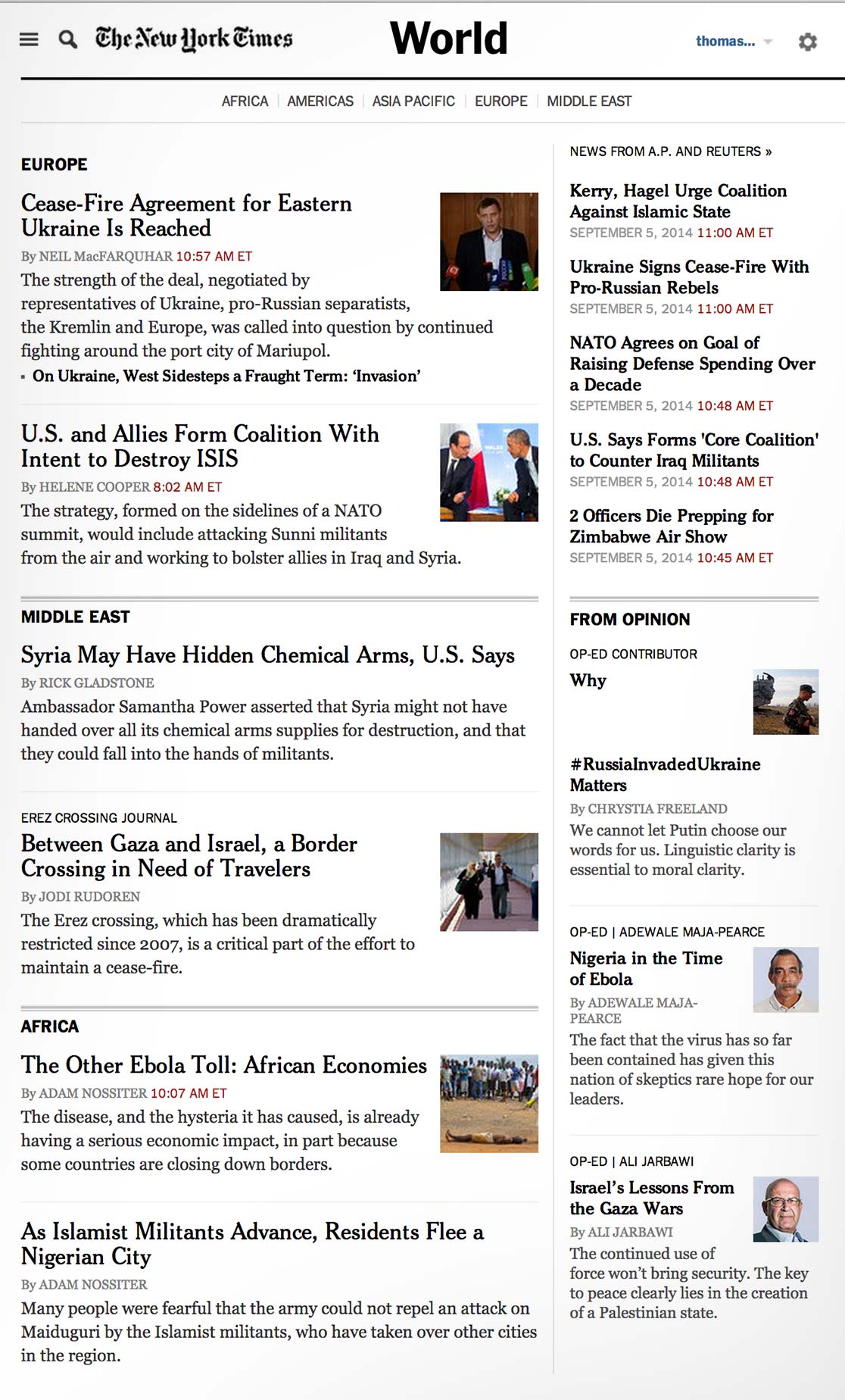 It sounds like we haven't moved out of the dark ages yet.

Don't get me wrong. I think it's absolutely wonderful that Ukraine and the Ukrainian separatist have now signed a peace agreement. Let's keep it that way. But it's the result of thousands of dead people, and a million people being without their homes.

These issues are all very important. War is a terrible thing, and should be covered. And it's dreadful for the people involved. This, however, is not why I post this.

The reason I point this out is not to sound insensitive. But one has to wonder what happened to the other 99.8% of the world? What about all the good things in life?

What I'm saying is that maybe this is the problem. If newspapers are only exposing people to the worst things in life, it creates a culture where we tend to gravitate towards a society of intolerance and distrust.

Let me give you a simple example: Earlier today, the Russian news agency ITAR-TASS, which is owned by the government of Russia, reported that "Minister says Russian vaccine for Ebola virus passes successful tests."

We've gotten a vaccine that has passed a very successful pre-clinical testing and now we're awaiting certification by the World Health Organization but we're ready to use the vaccine in principle,

Now, be honest. What was the first thing that came to your mind when you read this?

Was it "Oh, that's a lie. It's just another example of Russian propaganda. We can't trust them."

Be honest. Did you think that?

I do understand if you did (it crossed my mind too). It's because of what is happening in Ukraine and the rising tension between NATO and Russia, which has absolutely dominated the news for the past few month.

You see the problem? Because the media is so completely focusing almost all their attention on only the worst possible scenarios, as a culture, we are losing the nuances of life.

We automatically assume the worst, even when there is no correlation between the stories.

That is a cultural problem, which, in my opinion, is caused by the media (and our politicians, of course).

The reality is that most of what's going on in the world is extremely positive. People are generally being good people. I know people from the US, Canada, EU, Ukraine, Russia, China, Iran, Gaza, Israel, Nigeria, Brazil, Norway, Australia, Japan, and many other countries, and every single one of them are just like you and me. They are very nice people, generally doing a good thing, and trying to live a good life.

But you very rarely hear about this from traditional media.

So, if you are an editor for a newspaper, I have a challenge for you:

Next week, focus 99.8% of your stories on all the other things in life. And instead of always putting a negative spin on things, focus all your stories on the good things. focus it on the people who succeed, the companies who made good decisions. The politicians who actually made a difference. The wonderful things that happened. The new things that we have discovered. The examples of growth, and the stories about positive change.

And I'm not talking about making it shallow, focusing it on viral cat videos, or on completely useless stories about fun things that happened at the local supermarket. Leave that crap to the viral sites.

I'm talking about good, high-value, relevant and useful articles that are covering the important topics of those 99.8%, with a positive perspective.

And yes, I know this sounds ridiculous if you are a newspaper editor. Because you have spent your entire life chasing the conflicts and focusing on the scandals. And yes, I know you will tell me that those stories bring in the most page views.

But all I'm asking for is one week. Think of it like a test. One week of news that isn't dominated by the bad things in life.

What I think you will find are two things:

First, I think you will find that, over time, this focus would dramatically change our culture, which in itself would eliminate many of these conflicts. Sure, we will still have terrible organizations like ISIL or Boko Haram, but the real problem today is much closer to home. It's the culture of intolerance and distrust against anything that isn't 'like you'. We could change this by giving people a more nuanced level of reporting, with a positive focus instead of negative one.

That in itself is worth the challenge.

But, I also think doing this would dramatically change the relationship you have with your readers. Today, newspapers suffer from incredibly low trust and relevance levels. As low as that of spin-doctors and politicians. And the reason for this is very much that the public consider newspapers to be just as bad as politicians in terms of providing the right perspective.

But by changing your editorial style you could completely change your market potential, and it would position your newspapers back into the role of being a valuable source that people want to follow.

And it's not just something I'm saying. I see this all the time when I analyze the media. The ones who are doing it the best, and the new media entities that are winning, are all doing this.

This is my challenge to you. For one week, focus on the 99.8% that isn't about war, crime and really bad things. Focus on what life on Earth is all about. But do so in a relevant and valuable way, with as much attention to the stories as you put into it today.

And then, if it doesn't work, you can go back to writing about wars and massacres. You wouldn't have lost a thing.

One week is all I ask.

Of course, I'm not saying you shouldn't cover the bad news as well. Reporting about ISIL, for instance, is very important. But I will leave you with this final thought:

Isn't it kind of scary that when you go to New York Times (or any other newspaper), and you click on "World" that you only get this?

Apparently, not a single good thing has happened in the entire world today that isn't about war. Not one!

But you know, there were lots of good things. For instance:

Mexico announced a new City Airport that will not only help bring prosperity to the city, but it will also be environmentally sustainable. That's pretty exciting news, and it helps with the problem of global warming (at least from a trend perspective).

Many people suffering from drought in China have now gotten water (since it finally started raining). That's pretty good news.

In New York, the One World Trade Center is filling up quickly, which is wonderful.

In Israel, scientist have discovered how to make coffee more resilient to drought and diseases, and increase the flavor. This can have a huge impact on a very big and important market.

In the UK, consumer confidence rose 11 points, which is exceptionally good news.

Oh.. and scientists think they have found a vaccine for Ebola. It still needs to be fully tested, but that's awesome news.

The 99.8% is just filled with good stories. Let's focus on that!