The Media Doesn't Understand the World

Hans Rosling is an absolute hero of mine, because of his amazing work of presenting a 'fact based world-view'. And recently he was on Danish TV where he scolded the media for their continuing focus on only the bad things in life, even when those bad elements represent a tiny part of a much more positive reality.

You can see the video here:

This is such an important message. The media is simply not living up to its role. To give you a simple example. If I say 'Nigeria', do you think of that country as a disaster filled with terror, poverty, Ebola and other bad things? Or do you see a country that is going though a tremendous positive transformation and future potential, filled with amazing people doing amazing things?

And ask yourself, which stories did the press focus on. The ones focusing on all the bad things, which paints the people in a bad light. Or the ones that talk about their amazing future?

Well, let's do a test. I went to one newspaper and searched for 'Nigeria' and these were the highest ranked articles:

You see the problem here? Nigeria does have a number of important problems, but this paints to a picture of a country is chaos, when the reality is the exact opposite. Nigeria is a country of growth.

In fact, if we look at Nigeria's GDP per capita, we see the most amazing transformation. 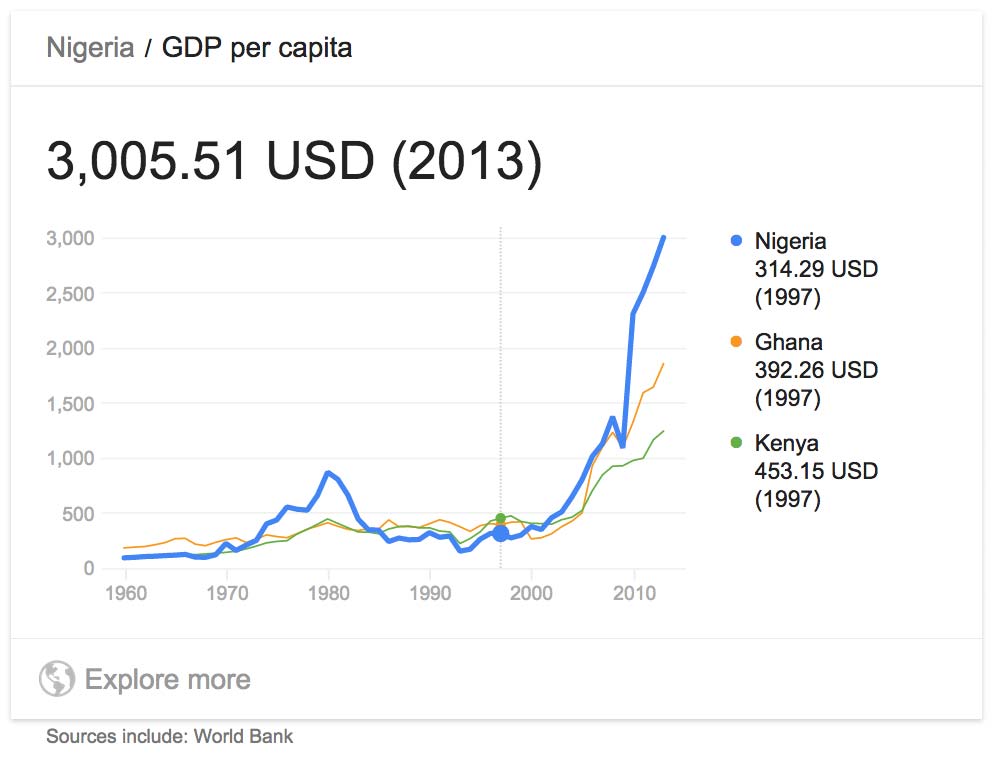 And if you look at tech world in Nigeria (and indeed in Africa as a whole), what they are doing around mobile is absolutely fascinating.

Granted, Nigeria's living standards are still much lower than in Europe or the US, but that's not the point. The point is what you see in the graph, and all the stories that links to it. And yet, those stories aren't what the media focused on.

Imagine how differently we would look upon the world if the media focused on reporting those stories instead.

This isn't about Africa either.

In US and Europe, we are currently experiencing an increase in people fearing for their own safety, causing virtual security apps to prosper (like this one), and the reason can only be attributed to the media's almost 'reality show'-like focus on all the bad things that happens.

We are creating irrational fear through the media. A level of fear that simply wouldn't exist if the media instead focused on covering crime based on the overall trends.

The world we live in today is much safer than anything we have ever had. But the media insist that everything is going to shit. And our politicians are trying to win votes based on those same fears.

Ask yourself. Is this really the best way to run a newspaper?