The Myth of the 99 Cent Book

Three has been quite lot of buzz around the rumor that Amazon is going to create a renting model around ebooks. I have two problems with that. First of all, I believe the digital renting business is fundamentally flawed.

It makes sense in a world in which renting can reduce the cost of inventory. But in a digital world there is no inventory. Renting is a business model for physical products.

My biggest concern, however, is one of price. As the GPS says:

People have some really strange ideas about the price of content. When I commented on an article about this over at GigaOm (speaking against the renting model), I received some troubling replies.

One wrote, "You may think 99 cents is too little, but Amanda Hocking has made millions by selling her books at that price."

That is true ...and Angry Bird is incredibly successful selling their game at the same price as well.

We can always find isolated examples of people or companies making millions selling something at a very low price. It is the age-old problem with the Long tail.

The long tail looks like this. At the top you have a few big successes, followed by a herd of people who are not making a profit. The long tail is a dead zone for each individual contributor, but a goldmine for the ones who can provide the platform. 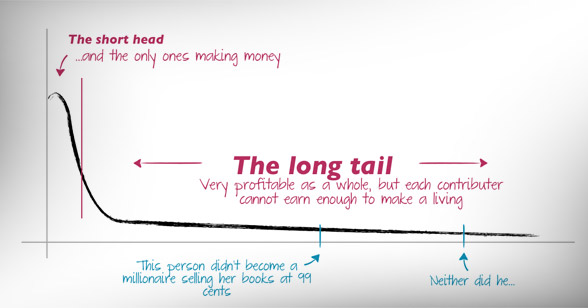 It is the same with Google Adsense. Most sites running ads from Google is not even close to earning enough money to cover the cost of making it. Take this article. The advertising income for this article alone is probably going to be somewhere around $10. But it took two hours to write.

I cannot make a living out of that. But Google is earning billions. They earn $3 for each article on millions of sites. The only ones profiting from the long tail are the ones who control the platform.

What authors (like me) fear, is that if we drop the price we end up with a long-tail economy. If that happens the book industry ends up in the same kind of mess that the newspaper industry is in. A mess in which each paper has to turn to spam-like tactics just to stay afloat.

The value drops. Nobody wins. The authors are not making enough money to produce real value and the readers time are wasted with each book.

Another thing to remember is that the primary reason why Amanda Hocking was able to sell millions of books, at 99 cents, was because she was one of the very first people to ever do it. When she launched those books, every other book costs $10-$25. We had a cash-strapped economy, and her books appealed the one group of people who have more money than anyone else-the teenagers.

Imagine if every single book costs 99 cents. Would Amanda then still be able to sell millions of books? The model only works when you are standing out from the rest.

The other problem is that many people seem have no idea how real-world economics actually work. A person replied this to me:

I have heard this argument so many times. Apparently people believe that if you reduce the price, your sale will increase by the same rate. I don't know where they got this idea from. It is not true.

Sure, providing something at a discount yields a higher sale, but it is not at the same rate.

Let me give you two examples.

If you sell 10,000 products at a price of $100, lowering the price to $50 would then mean you would sell 20,000 products. That might actually be true because the price point is probably too high.

Many people actually believe this. But if this was true, why don't you just go all the way and sell your product at 1 cent? Then using the same logic you would sell 100,000,000 products (one hundred million.)

This is not how the real world works. Saying that "a 99 cent book may bring authors a lot more money than $9.99 one" is a myth. And worse, it is the long tail economy. Only the short head survives.

Another example is if you write a book for a nice market, totaling 20,000 potential readers. And you predict that for the price of $9.99 you will reach 35% of that audience.

Then using the same logic, lowering the price to 99 cents will increase sale by a factor of 10 ...or cause you to sell 70,000 books and reach 350% of your total audience.

But that is not possible. You cannot exceed your total audience-you cannot even get a 100% penetration rate (not even if you gave it away for free.) If you lowered the price, you might reach 60% instead of 35%

There is something catastrophically wrong with how people perceive the price of content.

And the publishing industry isn't helping. When magazines like Vogue sell a subscription to their print magazine for just $12-for a full year-we are teaching people that content is not worth paying for.

Content is the only industry in which the price of content has dropped. In many cases, a yearly subscription now costs less today than in the 1960s. Every other product costs more. Content costs less.

This lead us to another problem. People have a very short term memory. A person wrote this in a reply to my comment.

Thomas, how do you know $10 is the right price? That price comes from a world where the cost of the physical book plus distribution was a big part of that. So naturally the price extended to somewhere around $10

So this person believes that a book priced at $9.99 is the *normal* price of printed book + distribution. And using that logic, an ebook should be less because you have no manufacturing costs.

Your readers no longer have any kind of idea what the prices used to be. It used to be around $39 in your local book store (no kidding.)

Stop dumping the price. Look at the profit and revenue trend curves for the publishing industry. Since they started dumping their prices, the industry has actually dropped at an even faster rate.

Instead of giving people a reason to pay, you are confirming that your content is not worth paying for.

Update: Read the why abundance doesn't scale when it comes to price.