Yesterday, while researching other things, I came across this t-shirt over at Threadless. 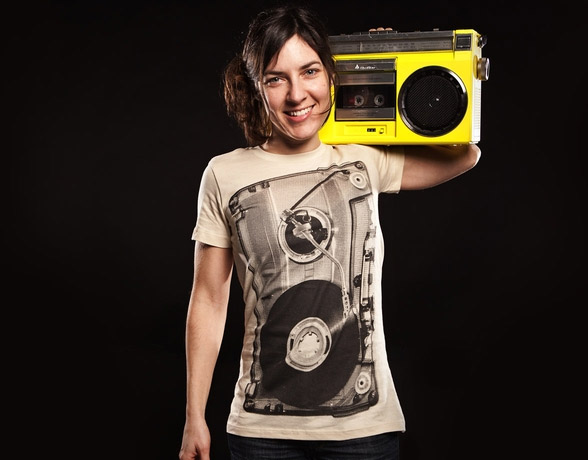 It reminds me of an experience I had a few years ago. I worked for this fashion company who (among other things) made clothes for teenage girls. One day I walked into the designer's office, and she was working in this new t-shirt-print incorporating a cassette tape into the design.

Without thinking I said, "Damn...that's out of date!"

The designer didn't take this very well. She very angrily told me that I was an idiot, that this was cool, retro and grunge and other such words.

I admit I wasn't thinking, and that I practically ruined her day (sorry about that!). But the point is that trying to sell a t-shirt with a cassette tape to a target market consisting of teenage girls ...is not going to work.

The cassette tape went out of fashion in 1985, when the CD started to take over the world. That is 27 years ago - 10 years before these teenage girls where even born. Most of them won't know what it is. It was something their parents used.

The designer, who were in her late 30s, remembered the cassette tape from her youth. She had built up a memory of great times with friends listening to music. When she looks at a cassette tape, it creates a positive association in her brain. But today's teenagers don't have that memory, hence, no association (and no sale).

Note: The person who made the t-shirt on Threadless is 43-years old.

This is an increasing problem in today's world. As the world changes faster and faster, the new generation will have a very different past than the one we grew up with. For instance, they have never known of a world without the internet.

You need to make sure that the decision you make is not biased by things the new generation has never experienced.

To help you, Beloit College creates the "Mindset List". The purpose of it is to remind teachers what kind of world new college students (18 year-olds) was brought up in. I have selected a few to illustrate what kind of world students know today (or rather don't know).

If we move a little further into the future, to 2015, the coming generations will only know a world where...

What we define as the new world is, to them, how it has always been. It is not the new normal, it's just normal.