The Pundits Versus The Analysts

The social media pundits are losing to the analysts because their theories don't stand up to reality.

I'm reading Nate Silver's book: "The Signal and the Noise: Why So Many Predictions Fail-but Some Don't" ...and it's good.

One thing I really like is the differences between what he calls foxes and hedgehogs ... or analysts versus pundits. Both may have a preference or personal bias, but the analysts don't let that influence the data.

Take a look at this illustration from his book. 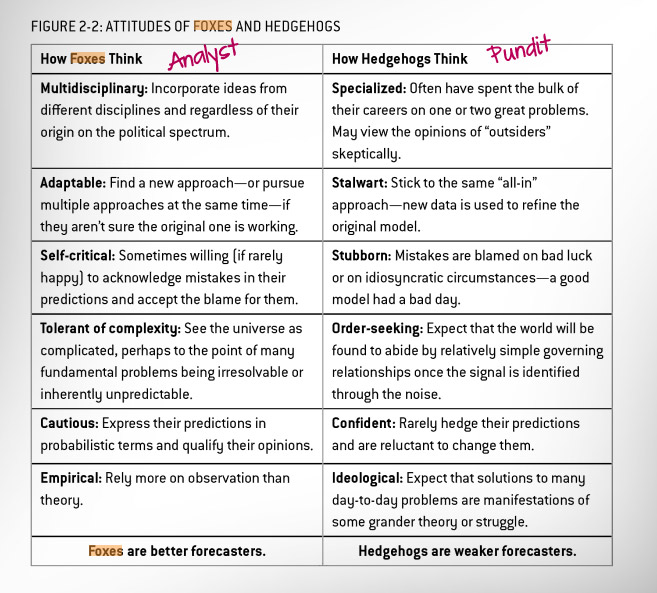 We see this with social media. Many social media pundits discharge reality, and instead attribute social behavior on what fits their personal preferences. For instance, a person who likes Pinterest will discard actual observations, and instead attribute your future success on a theory. And when that doesn't hold up to reality (like when a brand doesn't see a positive ROI), they attribute the failure to something else.

It's the difference between focusing on what people want to know, and what people need to know.

People want to know how to be able to create a successful brand page on Facebook in five easy steps. How something bad isn't really bad at all, that everything is fine, and to be confirmed in what they currently doing is also the right to do.

We see this a lot in the social world. In fact, people focusing on being hedgehogs are often far more popular, are shared more often, and is used more in the media than any others. Just look at all the articles promising social success using simple steps.

Foxes (analysts), however, take on a very different approach. They start out with the premises that nothing has been proven... yet.

One example was back in May when several of my readers asked me to write about Pinterest. As an analyst I couldn't just write an article highlighting the theory of what makes Pinterest work (like everyone else was doing) because I couldn't assume that Pinterest worked.

Instead I wrote "Should You Embrace Pinterest? For Brands and Publishers".

In this report, I don't talk about theory or how to do things simply. Instead, it starts out by observing the behavior of a Pinterest user, and explain how that impact brands and publishers in semi-probabilistic terms. And then, instead of telling you everything will be fine if you just do these 5 things, the report informs you about the pro and cons of the platform, how that affects you, and finally gives you a few tips proven to have a positive impact.

The problem is that articles like mine is not what the majority of people want. People want quick, easy, success ... and I give you probabilistic analysis that you have to stop to think about in relation to your brand.

See the dilemma? In order for me to provide you with more value, I have to make a trade-off in terms of traffic.

Nate Silver is illustrating to everyone just how big a difference there is between hedgehogs (pundits) and foxes (analysts). And he is proving that the pundits don't provide much value.

Yes, it's more complicated to follow an analyst, and yes you won't always just get the answer you want to hear. But the analysts are far better at predicting the future.

I think the greatest example of this is what happened over at Fox News on the night of the election. Karl Rove, a classic pundit, refused to look outside his own theories and personal bias, while Fox News' decision desk (all analysts) relied solely on qualified observations and probabilities.

It resulted in a showdown which Karl Rove lost badly. Just take a look at this video:

And after this listen to how Karl Rove is still not willing to change his views. Instead he is selectively picking out data that fits his biased. This is classic pundit behavior. As Nate Silver wrote: "Hedgehogs rarely hedge their predictions and are reluctant to change them."

And then take a look at this video recoded days after the election. Karl Rove still refuses to change his views, even when the result is clear to anyone.

Head over to Google+ to discuss and comment on this article