A company is not successful if it makes no money - regardless of how much imaginary value the investors tell you it's worth.

For the last couple of weeks, I have been writing and commenting on the social bubble. We all know that it's here. The signs are as clear as day. But there is something wrong with this bubble. It isn't actually a bubble for anyone who is in it. It is only a bubble for the rest of us, and the market as a whole.

What we are experiencing is the what I will call the Silicon Valley Dance, and here is how it goes.

First a bunch of startups all try to do something spectacular, and they pitch their ideas to angel investors hoping to get funding to get it going.

Most of these startups don't make it and are not invited to the dance - but the few that do are invited into a strange world of tech investments.

The first few steps are simple. The startup, now monetized by their angel investments, set out to create this amazing new thing involving new technology, new ideas, and new social doohickeys. In order to attract attention, they decide to give it all away for free. They do not even put ads on it. We see statements like. "This will be free, forever". And the founders say things like, "We don't like advertising, so we won't do that, ever!"

People, of course, are very excited by this free gimmick. It's new and exciting (and everyone loves that), and it is totally free - made by people who wants to keep it free forever.

The result is an incredibly initial growth curve. And since it is build around social sharing, it very quickly explodes in size.

Soon the journalists notice this new thing and write amazing articles proclaiming that this startup grew 4,000% the last 3 months alone (which is really easy to do when you start from zero).

The startup now needs to scale. They need bigger servers, support crew, and a bunch of other things in order to support this new 'social comet'. In short, they need to raise more money.

This, however, is easy. Because with a grow curve showing a 4,000% growth, the investors see billion dollars signs falling from the skies. Based on their initial numbers, it is decided that the company will grow by some even larger number, and base on that they set a completely made-up market valuation of something in the area of a billion dollars.

They then invest $100 million into the company (10 times lower)

The result is that the investors can invest in a company at a fraction of the price that they tell the world that it is worth. What a brilliant deal, especially since all the numbers are made up.

The startup continues to focus on growth and deliberately implement things that will boost traffic even higher, while neglecting to consider anything that could produce real money.

A while later, the small startup has tens of millions of free users, and it is now ready to be sold to some big clueless company who themselves have failed to embrace whatever the startup had invented.

The investors sit down to have a meeting with a big investment bank, and they decide that the company is now worth 50 billion imaginary dollars - and they base it all on its amazing growth as well as its track record of being valuated at an ever higher price at each investment cycle.

Just look how amazing it is growing. The first investors invested just a couple of thousand, then it was valuated at $100 million, which attracted even more investors, who invested $10 million, and now it is worth $1 billion! All imaginary valuations based on a company that makes no money at all.

The next day, the company is sold for a staggering amount of billions to some big company, and the founders become billionaires - and so do the initial angel investors and early investors.

Everyone is happy. The founders turn into venture capital investors themselves, and start looking for the next free-for-all-new-amazing-social-startup-with-no-revenue to invest in.

And the cycle repeats. 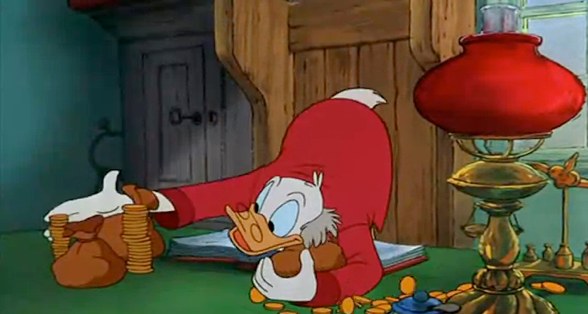 As you can see. Without actually making any money, at any point, a company was formed and later sold for billions of dollars - making both the founders and the investors filthy rich. And they can keep doing this as long as there are new startups coming out with new ideas. There is no bubble here. It actually works.

Being a venture capitalist is a tremendously successful business model.

But what about the big company who just paid several billion dollars for a startup with no revenue? Well ...this is where things start to go horribly wrong. The only way to somehow get this money back is to find a way to monetized all this free traffic.

They start with advertising, which results in a massive backlash from the people using the service, who say that this big company doesn't care about them and are only in it to make money - and many other arguments like, "they are breaking with the culture that the startup was founded on".

The big company is identified as the ultimate villain. Employees drop out and post negative articles telling the world that the reason they left was because of how 'corporate development' changed everything - and that sucked, so goodbye!

A few years go by, until finally the big company simply decides to write that 'experiment' off as a failure. They never succeeded in monetizing the traffic.

Why did it fail? Part of the reason is that the big company completely failed to understand the mechanisms behind it. If they did, they would never have bought the startup at that price to begin with. But the biggest reason is that it was based on imaginary value. It made no money, and its users have been taught to expect everything for free. That is not an audience or a product that can be turned into something that will ever be profitable.

The initial founders and investors don't care about that. They already earned their billion dollars. They are currently building up new startups with, no revenue and promises something new for free, only to pitch the idea other big clueless companies for imaginary market valuations far above the amount of money the investors have actually put into it.

The cycle continues endlessly. The bubble never burst as long as there are more clueless corporations waiting inline to buy the next innovative idea.

Nevertheless, the bubble will burst the day the big clueless companies start to use their brain. That's when this whole industry will come tumbling down. The day investors can no longer make up imaginary value is when it will all fall to pieces.

Personally, I cannot wait for this to happen. Just imagine a world where startups where based on creating something people would pay real money for, generate real revenue and produce real profit. These startups would have to build something that was far better to begin with. Something far more useful, and far more valuable.

Imagine a social network that had to be so good that you would pay real money for it. We used to do that in the past, but then came the Silicon Valley Dance.

The Silicon Valley Dance is also largely responsible for the culture of free. It is astonishing how many 'ordinary' people who believe that sites like Pinterest is worth their new $1.5 billion market valuation.

Ordinary people point to the fact that billions of dollars are exchanging hands, and the constant stories of founders getting filthy rich. But they didn't do it because they made something valuable. They did it because they fooled some big company into believing that their free traffic was worth something it wasn't.

The problem is that, in this kind of environment, it is almost impossible to create a real startup that makes real money. You have to compete with a bunch of startups with fictional financial valuations who gives everything away for free.

It's time for the big companies to wake up. While I wouldn't mind having a billion dollars in my bank account (which I don't), I would much rather spend my time building something of real value. Something that generates real money because it is really worth the price!

A company is not successful if it makes no money - regardless of how much imaginary value the investors tell you it is worth. It is a simple scam, although a highly profitable one for the investors.

It's the Silicon Valley Dance.