They acted like idiots, became the target for a social media backlash, and became more popular.

I want to point you to something that makes me feel a little bit unsure about the value of the internet ...and please step in and tell me what you think. There is a trend here that conflicts with how we believe things should work.

It's about the 'lack of effect' of the social media backlash towards Celeb Boutique after they posted an incredibly tasteless tweet.

If you haven't heard about it, let me give you the short version.

Last Friday, there was a massacre in Aurora, Colorado when a nutcase killed and injured a lot of people during the premier of the new Batman movie. Shortly thereafter, Aurora became a trending topic on Twitter.

Then Celeb Boutique tweeted this:

The reaction (obviously) was a massive social media backlash, as people were very upset that a brand decided to use this trending topic to promote their own products. Within seconds, Celeb Boutique was the target of a massive online protest against them, ranging from simple tweets saying they were idiots, to tweets saying that they should fire whoever was responsible, to more damaging tweets encouraging people to *act* against them (in several variations of violence). 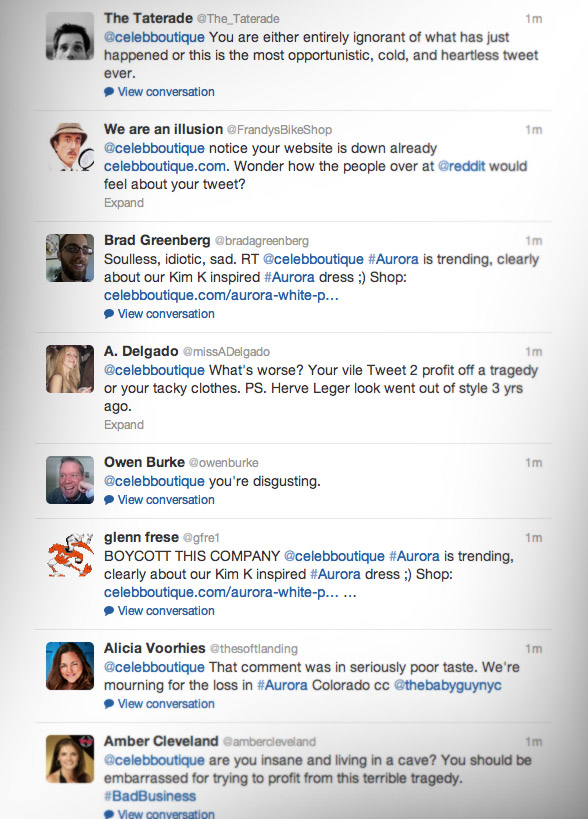 And it didn't stop there. The media picked up on it, and many of the big newspaper and online sites wrote damaging articles about them. For instance, LA Times and Huffington Post.

An hour later they deleted the tweet and apologized. They said that they hadn't checked what the trending topic was about, that they didn't know ...and that they were sorry. 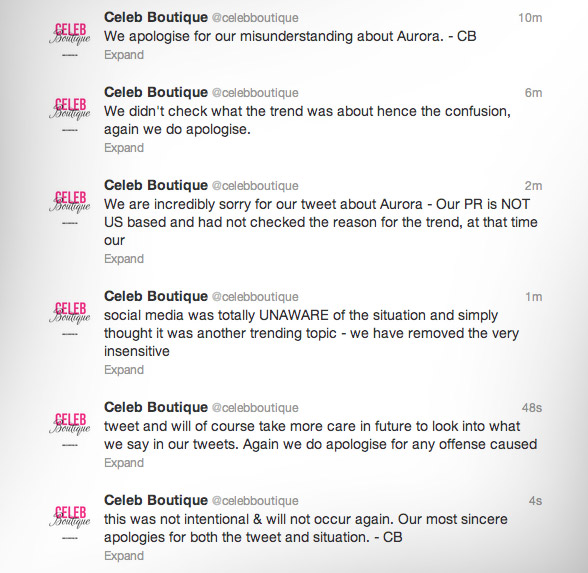 That, of course, was a terrible excuse. You don't hijack a trending topic without first clicking on it to see what it is about. This is social media cluelessness taken to the extreme. And of course, most people didn't accept this either, and the flood of angry tweets continued (with more than 100 tweets per minute).

Okay, so here is the problem:

Celeb Boutique obviously f**cked up, and their excuse wasn't much better. They became the target of a massive negative social media backlash, with accompanied negative exposure by the traditional press.

The result should be hugely damaging for them, and you would expect their social accounts to drop in popularity. Right?

But take a look at this graph. It illustrates the total number of followers to their Twitter account. They had about 42,000 followers before the tweet, with a slow growth rate. Then they tweeted about #Aurora being a dress that people should buy, they were hammered online for their tasteless behavior ...and ...got 1,000+ *new* followers.

What the heck? How does this happen?

They acted like idiots, became the target for a social media backlash, and became more popular.

This is not the first time I have seen this effect. It's actually fairly common for brands to become more popular after doing something stupid. There is something catastrophically wrong with people. Why are the social world rewarding bad behavior? I just don't get this.

We see the social media backlash. We see the negative tweets and the outraged response ...and based on that we believe that they are going to suffer from it. That's the logical conclusion.

But in reality, the effect is often the opposite, as the increase in exposure brings in people who thinks bad and clueless behavior is cool.

It's the same problem, for instance, we see with tabloid newspapers and crappy online sites being the most popular ones online. And it's the same behavior we see on social sites, where crappy spam posts have a higher level of engagement than posts by brands focusing on value.

I like to get your input on this. What do think about this behavior? What can we do about it? How can we bring back the concept of rewarding value, instead of becoming more popular by producing crap or doing stupid things?

Add your comment below, or even better, head over to my G+ post and discuss it there.