The Super-Connected Life - A Simple Example

Two of the things that I admire most about the world live in today: First, that we have managed to break down the walls of the physical world enabled us to connect freely with anyone, anywhere, using any channel, in any way. It's just amazing what we can do today. In my line of work, I rarely speak with people in the same country that I live in, but I have continual conversation with people from all over the planet.

The other thing that amazes me is that not only are we connected but we asynchronously connected across so many different channels - most of which are coming from places we never expected. It's the metaverse, once thought up in a book as a science fiction virtual reality, now being brought to life as a "real" wold connection.

It's just boggles your mind.

Here is one simple example. Today, in Denmark, the government finalized the 2012 Budget. And on TV (which I watched online) we could see the politicians and ministers as they voted. At the end of it, one of the ministers suddenly took out her iPhone and snapped a picture of something.

A few minutes later, we could see exactly what that picture looked like on her Twitter profile: 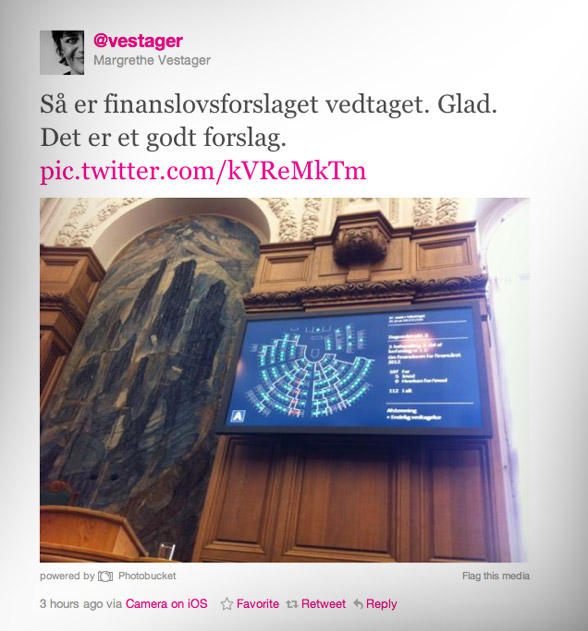 I know this is just a simple example, and that you and I are doing this every day. But think of the implications of this. Sharing used to be a form of publishing. Something that was done from a sender to a receiver.

Today, sharing has no destination. Individual channels intermingle without a predefined purpose or a specific destination. It's like air. It's coming from anywhere. Nobody planned to make this connection. It just happened naturally because we now share, naturally.

This is the real future of social ...and we are still only just beginning to see the shift. The real social revolution has yet to come.