The Weirdness Around 'Alex from Target'

You might have noticed a new 'viral sensation' around a guy called 'Alex from Target'. Within a very short time, a picture of a... well... cute boy (if you are a teenage girl) started spreading like wildfire, resulting in Alex ending up on the Ellen DeGeneres Show. 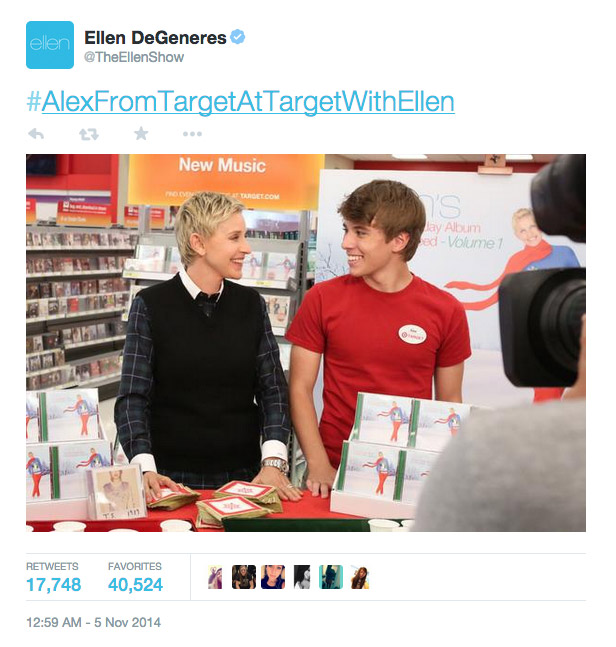 This is pretty spectacular, and I'm sure this has been quite an experience for both Alex and also the girl who originally posted it. It's not everyday that a cute girl takes your picture and you end up on Ellen. (Hint: Alex, send her some flowers)

But then things started to take a really weird turn, as the viral marketing agency Breakr claimed it was responsible for the whole thing. In a lengthy post over at Linkedin, Breakr's CEO wrote:

Yesterday, we had fun on Twitter with the hashtag #AlexFromTarget which ended up to be one of the most amazing social media experiments ever. We wanted to see how powerful the fangirl demographic was by taking a unknown good-looking kid and Target employee from Texas to overnight viral internet sensation. Abbie (@auscalum), one of our fangirls from Kensington, UK posted this picture of Alex Lee (@acl163) on Twitter. After spreading the word amongst our fangirl followers to trend #AlexFromTarget, we started adding fuel to the fire by tweeting about it to our bigger YouTube influencers.

The problem is that this doesn't seem to be true, and I decided to do a little digging. Was Breakr actually behind this? And was this entire viral sensation merely a orchestrated marketing stunt?

First of all, let me tell you how it all started. I reached out to the person who originally posted it for an explanation.

Last month, long before Breakr even noticed it, two girls, Brooklyn (@brooklynjreiff) and Alanna (@alannapage12), were having a conversation about this cute guy Alanna had seen in the local Target store. Alanna tweets about it:

Brooklyn decided to take a picture of him and when she did, she tweeted the picture back to Alanna.

This is when the picture is born: 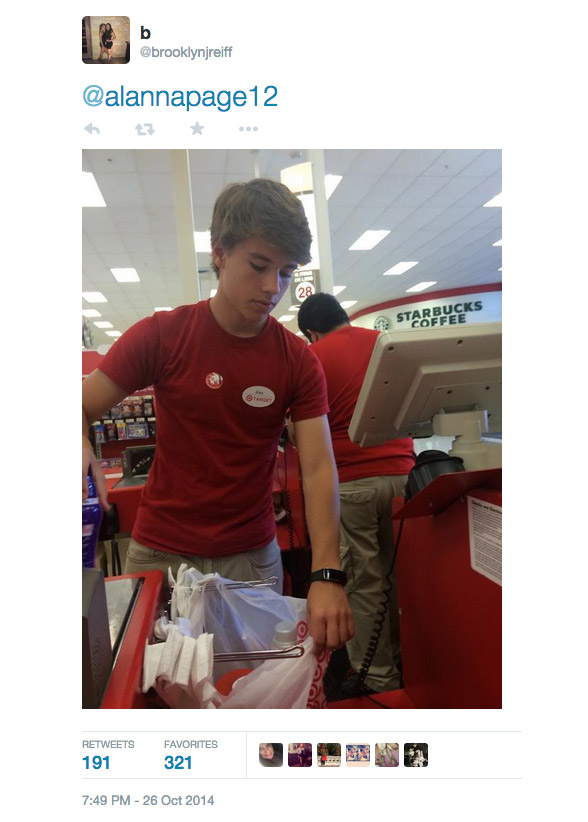 Alanna then retweets it with a 'hot' symbol, and from there it starts to slowly spread. 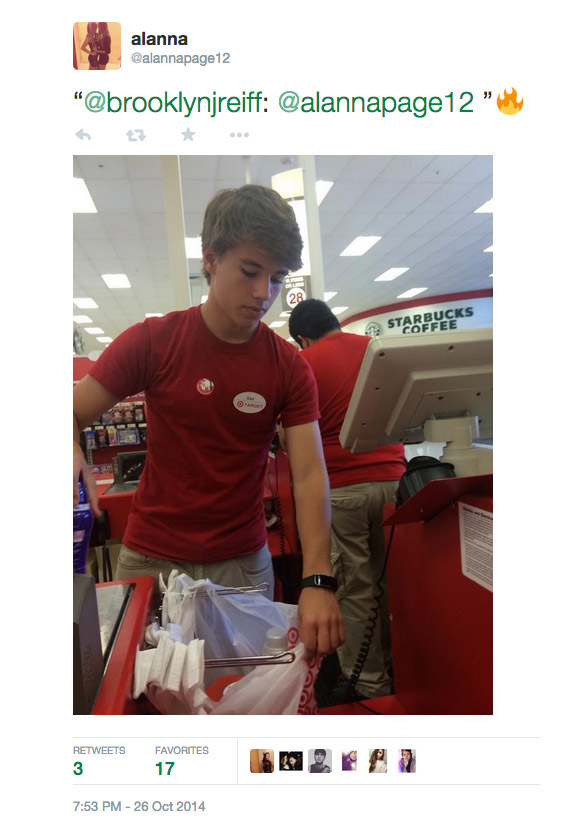 After a week, the whole #AlexFromTarget phenomenon is already gaining a lot of momentum, causing another girl @auscalum to tweet the picture as well(after finding it on Tumblr). And, at this point, Brooklyn's picture of Alex has already built up a lot of viral energy. 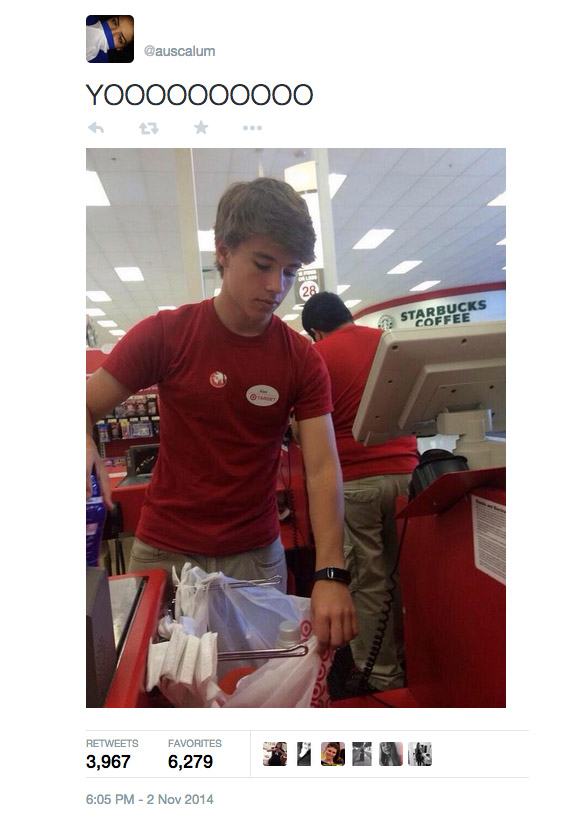 It is also at this point that Breakr comes into the picture, and claims that they are responsible for the whole thing. As they wrote:

Abbie (@auscalum), one of our fangirls from Kensington, UK posted this picture of Alex Lee (@acl163) on Twitter. After spreading the word amongst our fangirl followers to trend #AlexFromTarget, we started adding fuel to the fire by tweeting about it to our bigger YouTube influencers.

This, of course, is not true since Brooklyn clearly posted the picture a week before that. I also asked Brooklyn if this was done as part of a Breakr campaign, and she told me that it wasn't. She doesn't even know who they are:

I don't know who Breakr is so there is no way they could've 'set me up for this'. It was simply a fun convo between a friend & I before it went viral.

So, we know that Breakr wasn't the one who created this. And yet, their CEO told CNET:

Truly, we never thought it'd go this far, but it proved that with a strong fan base and rally the fan girls, you can.

Breakr also told CNET that "Alex happens to work at Target with one of Breakr's kid fan base. He gave his permission to have the image taken."

This is also not true, as Alex pointed out in a couple of tweets saying:

My family and I have never heard of this company. [...] I didn't know the pic was taken or tweeted until my store manager showed me.

But maybe what Breakr is 'claiming' is not that they started it (even though that is what they are hinting at), but that they merely caused it to go viral with their 'fangirls'.

We then turn to Abbie, the fangirl Breakr specifically mentioned as being one of them, but she too says that she has never heard of Breakr

At this point, Breakr's claim starts to sound really dubious. They didn't start it, and the person they claim to have used to create the viral effect doesn't know them.

Let's talk about the actual viral effect that Breakr could have influenced. In his post, Breakr's CEO writes:

Stephen launched a parody YouTube video to keep fueling the social media flame with our kids (as you can see in the video below, we were all in a Google Hangout the whole time). By controlling both sides of the conversation, we got more and more people to talk about the situation which kept the hashtag trending #1 on Twitter worldwide. Alex's Twitter account started with 2k+ followers around 2pm and is now at 340k+ followers.

Stephen is one of Breakr's influencers, who posted this rather negative video:

However, there are a number of problems with this video. As you can hear, Stephen is complaining about how famous Alex has become. Meaning that Alex was already a viral sensation before this video was made.

Secondly, this video is unlikely to have caused much viral effect at all, considering that Stephen is a guy with only 1,746 subscribers (which is hardly an influencer), and most of the activity on that video seems to have happened after Alex went viral.

In other words, Alex most likely caused Stephen's video to go viral, not the other way around. Stephen's video doesn't seem to have had much effect, but there is no way to accurately measure that. We can only look at when people were commenting and other such things. And pretty much all the comments on Stephen's video are only one day old, which would indicate that most of his views also happened within just the past day or so. That is after Alex's picture went viral, which also means that Breakr wasn't the cause of it.

It's the same story with other Breakr influencers I have looked at. One influencer that Breakr mentions is Philip Tatro, who posted a picture of himself with 'Alex' written on a sticker. Philip is pretty popular, with 14,000 followers, but this picture only has 61 retweets.

In other words, Philip has almost zero influence on Alex's viral effect, and he too is responding to a viral sensation that has already materialized. Again, Alex went viral before Breakr's influencers tried to use it for their own gains.

Then we have this picture, posted the day after Breakr claims to have created this viral sensation, where the conversation around Alex on Breakr's app is... zero. 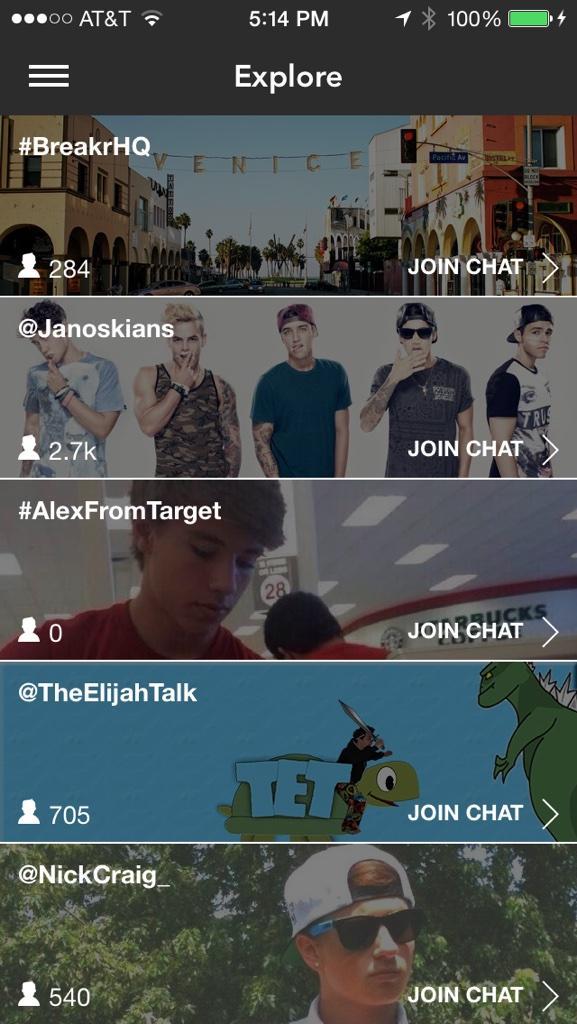 This is hardly proof of a powerful Breakr fan base.

It's entirely likely, though, that Breakr thinks they are responsible for the viral effect. Their CEO might simply be suffering from delusion of grandeur, and are now trying to use this to make exaggerated claims to 'sell their business'.

But from what I can tell, Breakr had very little influence on this, if any. The real credit goes to Brooklyn and Alanna who started it, and people like Abbie and many others who fueled it.

In other words, there was nothing orchestrated about this. This was a real viral sensation that just grew and grew over the cause of a couple of weeks. At least, that's how it looks from my analysis.

I have reached out to Breakr's CEO to hear his side of the story. Specifically, I have asked him two questions:

First, How can you be responsible for a viral sensation when the people it is coming from don't know who you are? What exactly is it that you are claiming to have done?

The second question is about Breakr's business model, specifically that they seem to be using influencers without disclosure. I have asked him to answer: "in accordance with FTC rules of disclosure, anyone who benefits financially from posting things on social channels (or anywhere else), must disclose that relationship. How are your Breakr influencers doing that?"

I also asked him to quantify the ROI of what Breakr is doing, Because, even if Breakr had been responsible, I don't see how it's useful for brands in terms of ROI. A video like the one from Stephen might have gained a number of views, but it's in no way positive for a brand like Target. As a media analyst, it seems like Breakr is creating the type of attention that has zero value for brands.

At the time of publishing this article, Breakr has yet to respond. Granted, I only gave him three hours to do so, so I will update this article when (or if) he does.

In any case, congrats Alex and Brooklyn on your fame.

Update: And in what is starting to become a familiar pattern, people have now begun to post hate tweets to Abbie for thinking she is part of Breakr... including this: 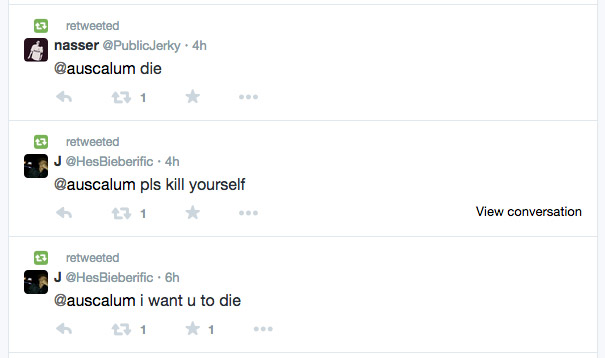