Understanding How To Respond To Change

Isn't it odd that so many companies fight change instead of embracing it? Shouldn't we welcome it with open arms? See it as huge opportunity to get ahead of our competition? 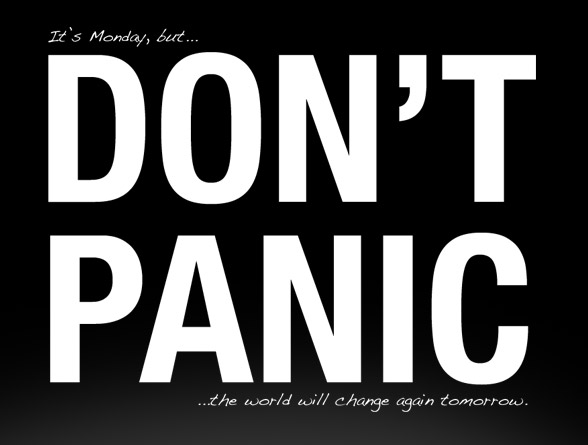 Instead of embracing change, companies react to it in the most counter intuitive manner. And this is especially true online. There is something about the internet and CEOs that don't mix.

If a change happens in "real life," CEOs quickly react to the new market, and adjust their business to get the maximum benefit out of it. But, if change involve the internet, they look at it like a deer stuck in the headlights of a coming car.

It's not difficult. If people want to buy an ebook instead of printed hardcover book - you adjust your business and start selling as many ebooks as you can. Right?

Just look at Amazon. Apple announced the iPad, and instead of trying to fight it, they simply created Kindle for the iPad - maximizing sales, regardless of what channel people use.

And, here is the really fun part. The internet not only allows you to be in direct contact with your customers. It also drastically reduces cost, and overheads expenses.

With that in mind, the way many companies react to change makes very little sense. Like:

Many companies face the challenge of seeing their core market being divided, and when that happens you have to make a choice. What path to take?

The problem is that most companies decides to "do both." They have no real focus, and the result is that no one will follow them. People cannot identify themselves with a company that tries to do everything.

Sticking your head into the ground

Another way to tackle change is to refuse to give in, and pretend to be an ostrich. I'm surprised by the amount of companies who think social media is a fad. Right?

Obviously, this response will destroy your business. If you don't change, you will end up in no mans land. This is what happened to General Motors. The world changed, they refused to acknowledge it, and they nearly destroyed themselves.

Going back to your roots

Another common approach to change, especially for companies who do not know what to do about it, is to go back to what they used to do. Instead of changing, they try to move the company back to the good old days. Back when where the world made sense to them.

But it never works. MySpace is trying to go back to its roots, with no success. So has many other companies. They all fail.

The worst way to handle change, and the point where companies really lose a grip on reality, is when they react to change by trying to block it.

We see a lot of this these days. The internet removes the boundaries and country limitations, but many companies use geo-targeting technology put them back in place. E.g., applications are being limited to a certain country, and products are blocked from being sold outside your core market.

And it is not just the digital industries that suffer from this. Many industries are limiting digital sale, to protect their brick and mortar businesses.

The problem is that you cannot block change. People will always find a way around it, but worse of all, blocking change, simply opens up your market to your competitors.

There is, however, a much bigger challenge. The four types of change, illustrated above, does not actually represent the real change that we see every day.

Change is sneaky at best. It's rarely a straight line from one thing to the next. Instead, change usually disrupts your business, and undermines its very foundation.

You need to look at change from a very different perspective. Like:

These days everyone is a publisher. And the world is increasingly turning into many niche channels.

Just look at the newspaper industry. In the past, the best way to create a newspaper, where to reach a broad mass market. This was caused by the cost of production and distribution. It simply wasn't cost-effective to create ten smaller newspapers that each covered a specific topic. It would be too expensive.

But, online production costs only the time it takes to write an article. There is no printing involved and distribution is practically free. The limitations of the past that formed the newspaper business model, has disappeared. And so has the market.

The packaged mass-marked news industry is gone, and every topic is now covered in much greater detail, on niche sites. And we bring it together through the personal news aggregators (which the old media industry is trying to block... ahem!).

The old newspaper industry actually has a big advantage. They have the size, the resources, the connections, and the special access. The only thing they need is to rearrange their industry, from a mass-produced newspaper, into a news-agency, creating several really good niche channels under the same brand.

And this affects more than just the old media industry. E.g., clothing companies are "under attack" by very good niche channels like Threadless. Or Giannina Lezcano, a 25 year-old girl from Paraguay, who teaches people how to turn boring clothes into something really exciting.

Change is not a straight line

But the really important changes rarely happens within your own industry.

A simple example. Forty years ago, no publisher could imagine that the future of book publishing would be via people's phones. Right?

This is the reality we live in today. I read most of my books as an audiobook, that I listen to via my iPhone. I also read a ton of ebook in either Stanza, Amazon Kindle or eReader.

The future of book publishing is... mobile! And the big players are a bookstore that made a flat computer. A search engine that decided to scan every book ever made, and a computer company that sounds like a fruit.

Finally there are the "You are out" type of change.

This is when the world changes in ways that make you obsolete. There is nothing you can do about it, because the change is coming from "outside," and... well... the only real thing to do is to sell your assets before it is too late.

It's kind of sad when it happens, but this is life.

The horse carriage industry died when the car was invented - and with it, the need for companies to employ people to take care of their horse stables.

My grandmother was a telephone switchboard operator in her youth. The people who manually connected the lines from one phone to another. The invention of the automatic switchboard destroyed that line of work.

The first company I worked for was a clothing company. It had a factory floor full of seamstresses, and they made up 85% of the workforce. Now, no clothing company in Europe produce any clothes. It is all produced in China.

And eventually, a many other jobs and industries will simply disappear. Within the next 5 years, the newly formed job of being a "Social Media Manager" is probably going to disappear too. Although the job of being a community manager is likely to last a lot longer.

The people who change wins

This is also true when it comes to investing your resources. Most companies invest in something, and then stick with it until it runs out of energy. What you should really be doing is to invest in things that helps you change faster.