What countries are Baekdal Plus subscribers from?

One of the things that often defines a digital native is that they have no country. Traditional media companies are all country-based. We often hear that traditional publishers are 'expanding into [insert country]', as if they are not already there.

Digital natives don't think like this, because they are global by default. A US YouTuber would never say, "I want to expand into Canada," because they are already in every country in the world.

I wrote much more about this in my recent newsletter, which you can see here (and if you aren't getting it already, do add yourself to the list).

Another place I see this is looking at this site, Baekdal Plus. My audience comes from all over the world (although some countries are dominating more than others), and it's quite interesting to look at.

The way I run my business simply wouldn't be possible 10-15 years ago. Baekdal Plus is 100% digital, but only 3% of audience is coming from my own country. 97% is coming from other countries, which I would not have been able to reach before the internet.

But let me show you the data.

There many ways we can measure an audience. Do we just look at the traffic, or do we look at conversion (which in my case means subscribers)? Well, let's look at both.

Here is a graph illustrating which countries my audience is coming from if you look at unique visitors. 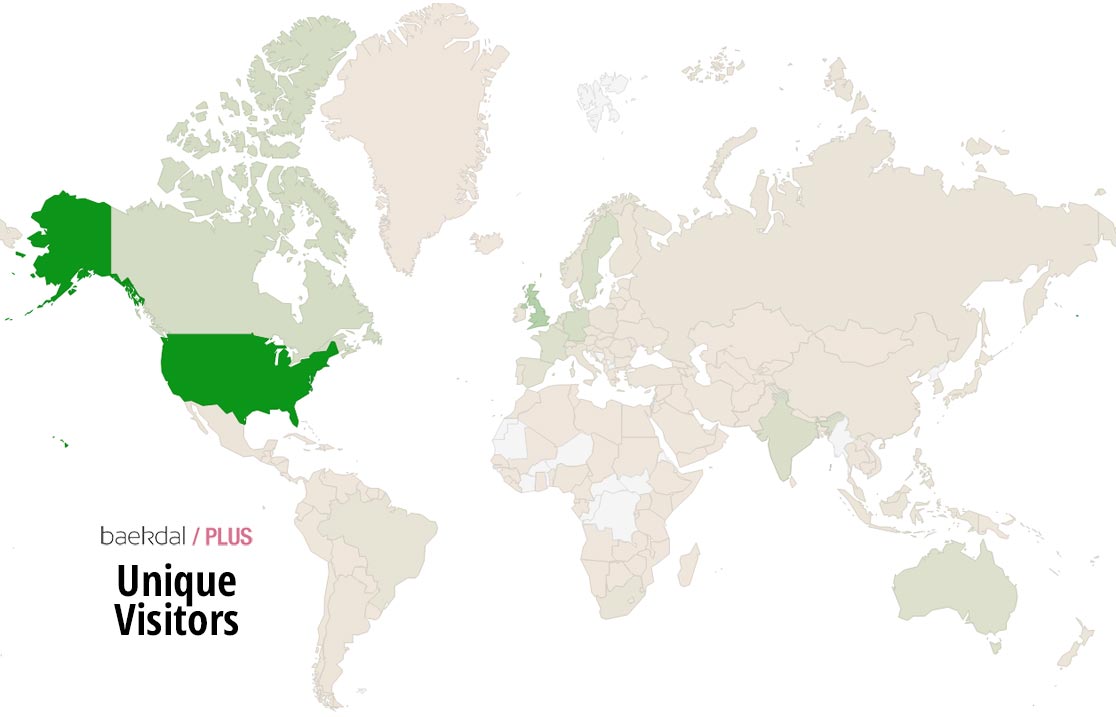 As you can see, I have a ton of traffic coming from the US, but keep in mind that the US is also a country with 318 million people, so it's not really surprising that this one country stands out.

When we instead look at this per capita, now we see that most of my traffic is coming from countries that are close to my own (Denmark/Northern Europe) and/or English speaking. 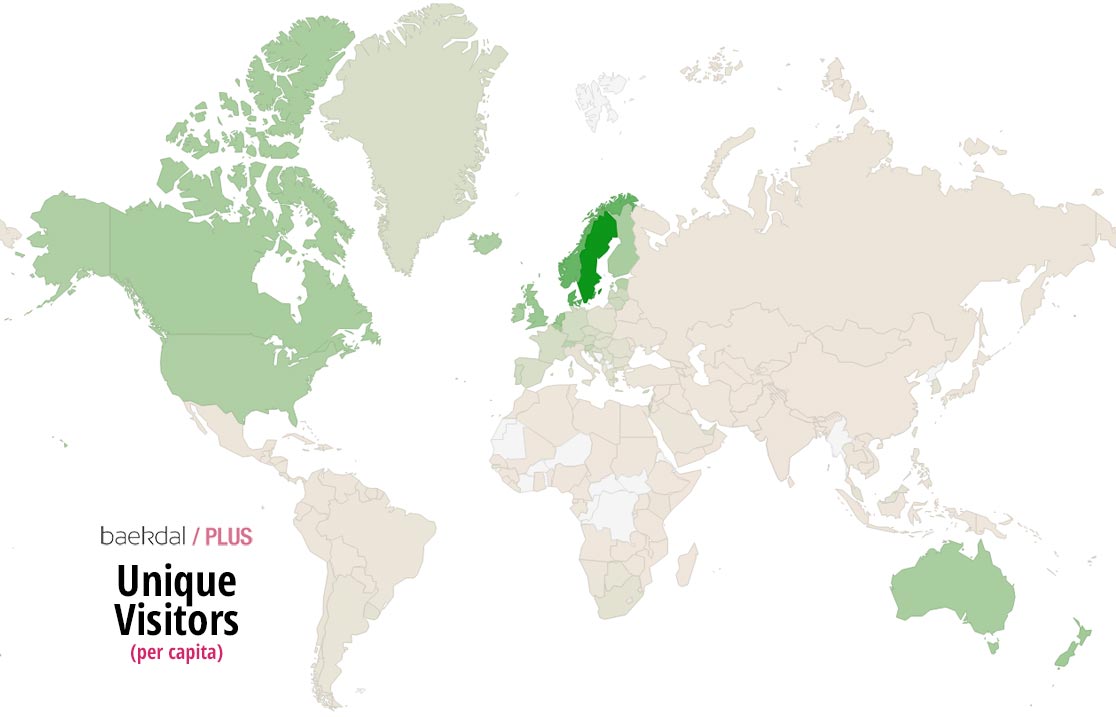 Notice how I have just as much traffic from Australia as from the US, when compared per capita. Language is more powerful than distance in the connected world.

But notice how people from almost every single country in the world visit this site. The only ones missing are a few countries in Africa, Kosovo, Macedonia and Bosnia and Herzegovina in Eastern Europe... and North Korea.

This would have been impossible just 15 years ago.

But I'm not really interested in unique visitors, because I don't make any money just from the traffic. Baekdal Plus is monetized by subscriptions, so it's far more relevant to me to look at that.

So, here is the same map but for all 'conversions', being both actual subscribers and people signing up for a free trial. 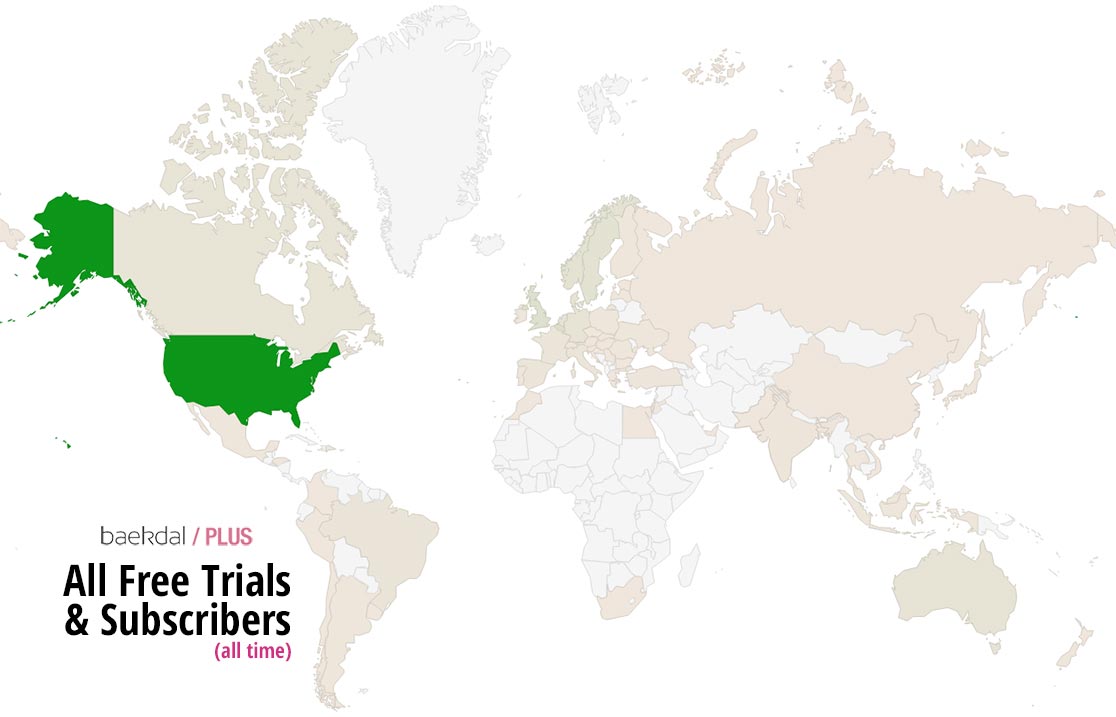 Yes, the US is dominating Baekdal Plus in a big way. About 60% of all my subscribers and free trials come from the US.

But again, because the US is so big, it is kind of hard to see what's going on everywhere else. So here is the same data excluding the US. 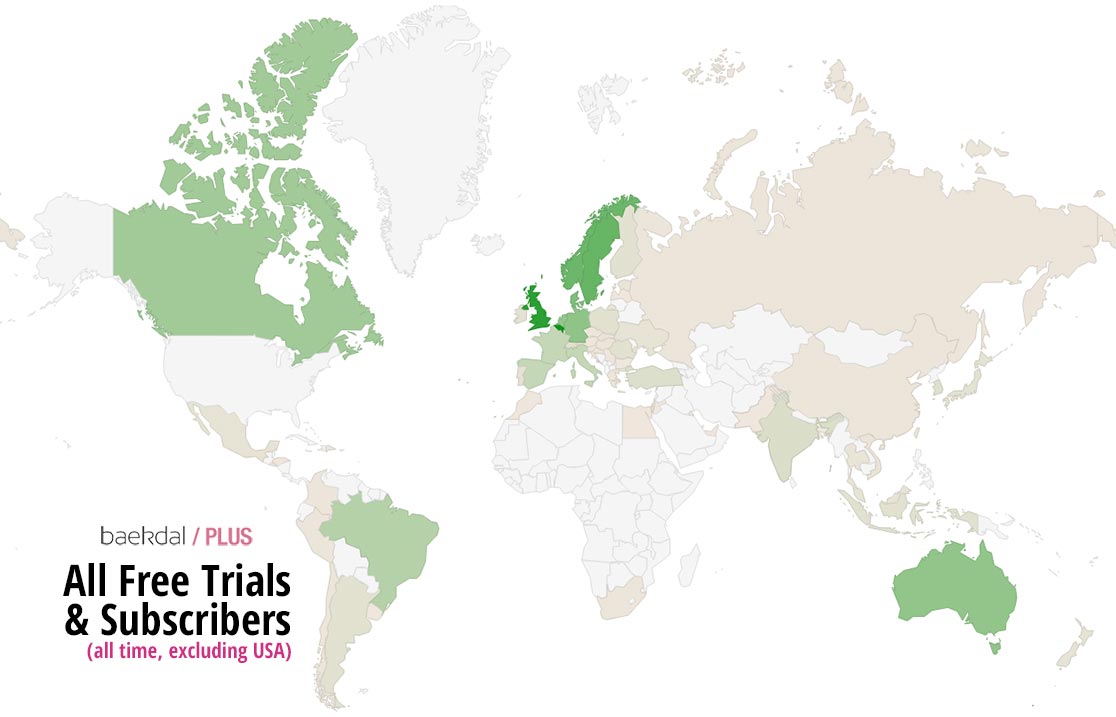 What you see now is that the UK and Belgium are my two largest (non-US) countries in terms of where my subscribers are coming from. Next are Norway and Sweden. Then comes Australia, followed by my own country (Denmark), Germany, Canada and Brazil.

Yes, Brazil. How awesome is that?

You will also notice that I'm getting more and more subscribers from India and Indonesia, which is just brilliant.

Africa is a bit of a problem though, and so is China. I have a few important subscribers in Hong Kong, but because of China's media laws, it's impossible for me to make Baekdal Plus relevant for them.

As you may know, Turkey has decided to close down its internet to global players by forcing, for instance, payment providers to operate entirely within its borders (similar to what is happening in China). And as a result, PayPal has been forced to stop all payments from my subscribers in Turkey.

It's yet another example of how Turkey is destroying itself and hurting not just the media industry, but also the tech industry. It's really sad to see.

So, thank you Turkey for being an idiot. 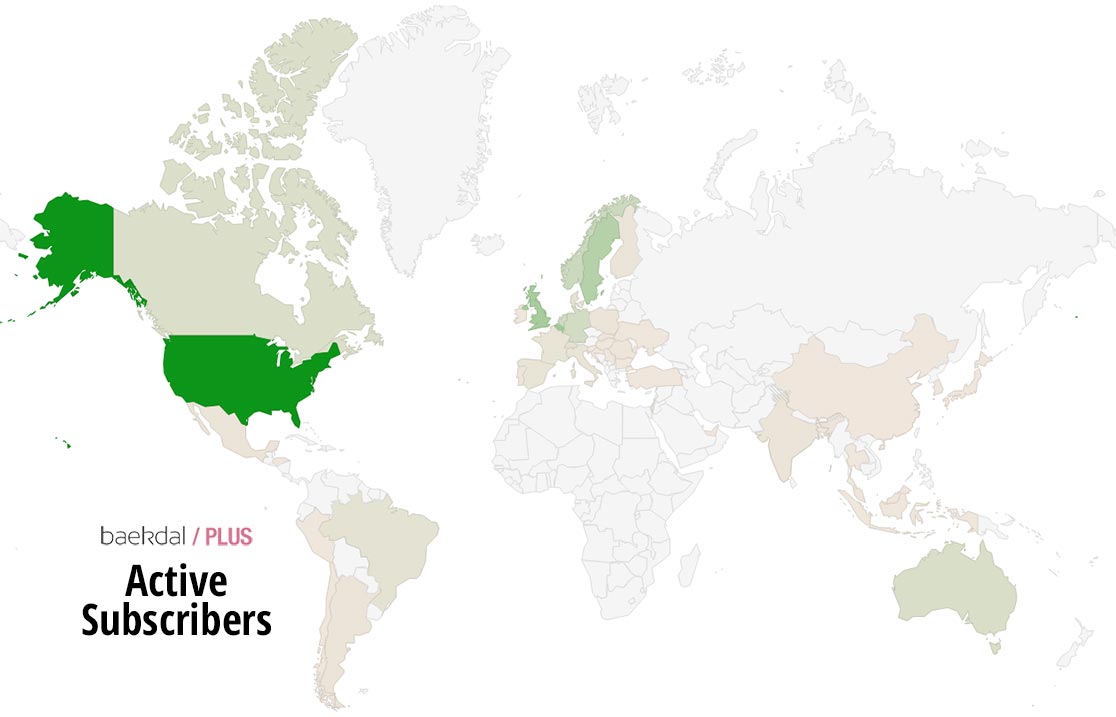 But while the US is awesome, let's exclude it from the data so that we can see the pattern everywhere else, which looks like this: 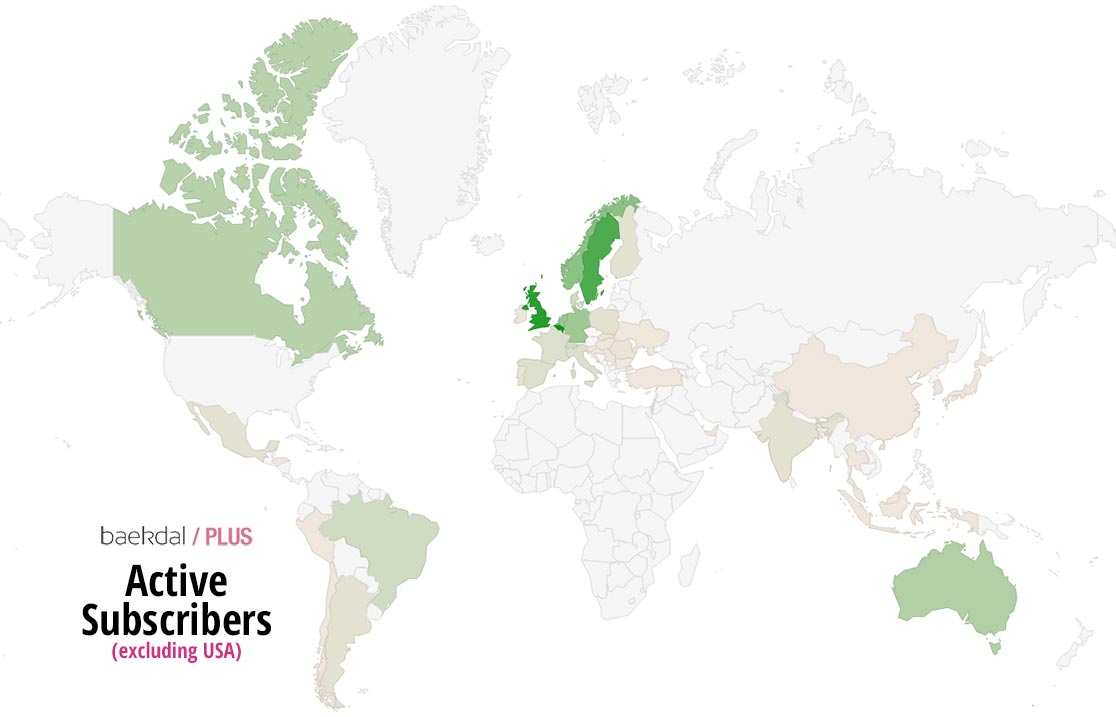 Again, we see that the UK and Belgium are huge countries for Baekdal Plus, but Sweden is not far behind. Then comes Norway and Germany, followed by Australia and Canada. Brazil is pretty high up as well. Spain, France and India are pretty good too, as well as Mexico and Argentina.

But look at Denmark. My own country has almost dropped off the map, and I have nowhere near as many subscribers coming from my own country as the countries around me.

As I said before, only 3% of my annual revenue is coming from media companies within my own country. 97% comes from other countries. And you simply couldn't do this 10-15 years ago. This is what happens when you live in the connected world.

So, when I define my location as 'global' on Twitter, that's really what I am. I may live in Denmark, but my work, my analysis, my business... and in many ways also my culture... does not.

For instance, I was recently introduced by a Swedish magazine as a 'Danish media analyst', but I'm not. There is nothing specifically Danish about my work or analysis.

Anyway, this was just a bit of data fun that I wanted to share with you. What's interesting about this, though, is the larger trend.

Fifteen years ago, none of this would have been possible. But today, it's not just possible for me, but also for many other digital native publishers. And if we look 15 years into the future, this will become the new normal. 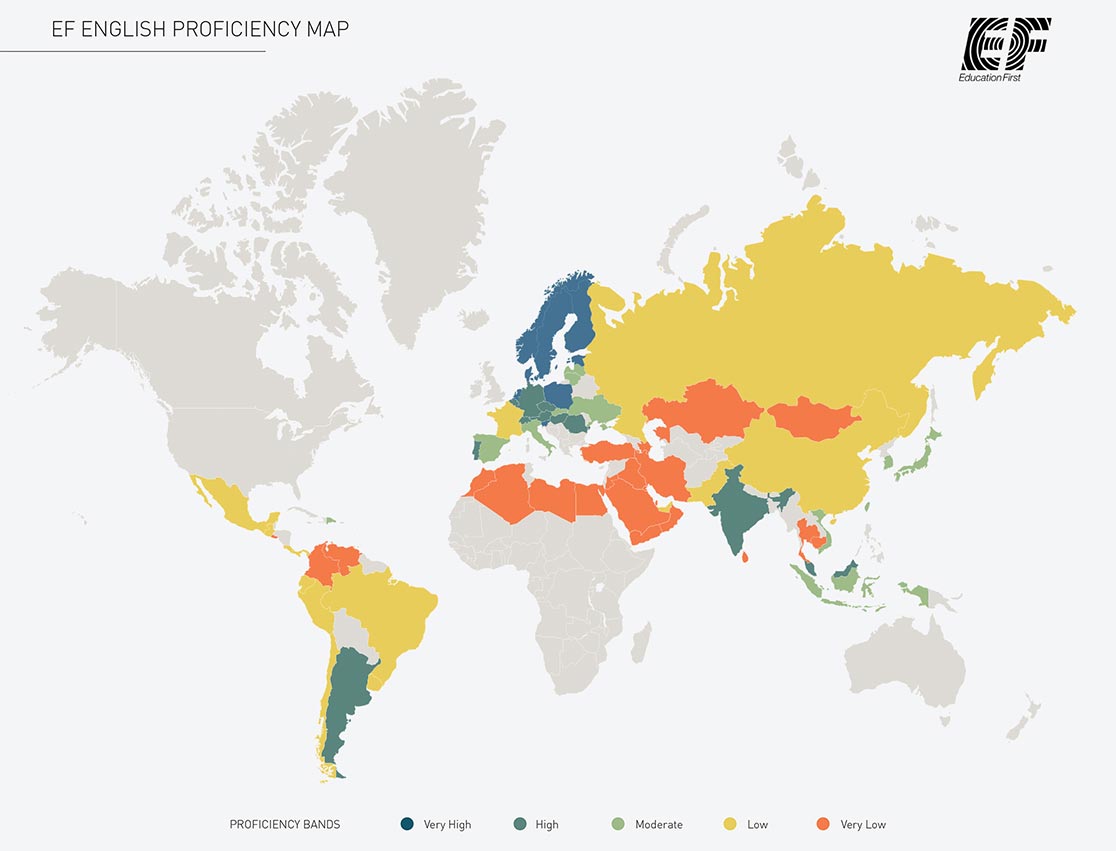 And a big part of this is because of language. The countries with a very high English proficiency are also where we see most of the digital natives. And every young person today is growing with the internet, social media, blogs, and other channels, where communicating isn't defined by any specific country nor the local language.

Already today, people don't really think about what country someone is from before they follow them on Instagram. We only look at what they do, who they are, and why they are sharing things.

The older generation is still mostly just following people locally because of old habits and existing networks, but the younger generation isn't really defined by country anymore, and especially not in countries where English proficiency is very high.

We see this even more with magazines and newspapers from English speaking countries. More and more of their audience is what is usually referred to as 'out of market', as people are reading their publications from outside their old markets.

Local newspapers in the US, for instance, are slowly turning more and more national, and UK magazines are increasingly focusing on the entire English speaking population of the internet, as opposed to just the UK population.

And, of course, digital natives are doing all of this by default. Here is the most popular YouTuber in Norway. Yes, she is obviously creating all her videos in English, because that's the only thing that makes sense.

As you can see in the map above, real English proficiency is still only a thing in parts of Europe and a few other places, but if you live in any of those places, it is becoming increasingly important to look at publishing in English as a key driver of future growth.

If you are a Norwegian magazine, for instance, does it really make sense to continue to publish in Norwegian and only reach a maximum of 5 million people, or would it make more sense to create a more global magazine in English just like the popular Norwegian YouTubers are already doing?

That's the shift that is currently happening.

Of course, if you live in France, where English proficiency generally is still low, it's too soon to make that shift. I would not recommend to a French magazine to do what I would tell a Norwegian magazine.

But, again, this is a generational thing. The future generation in France will have grown up communicating in English with all their friends, so whether something is in French or in English won't really matter to them.

That's why we call this a transitional trend. Our world is transitioning from a country-based media industry, to an interest based media industry. And this change is happening faster in countries with a high proficiency in English, because it allows to be global by default (which is impossible for a Italian magazine).