You know how everyone is saying "What next for ... [whatever people talked about yesterday]?" It seems to be a common phrase in Silicon Valley circles, and from people who report on it.

And true enough, we live in a world of change, and that's all very exciting. But sometimes, we kind of miss the point with this focus on 'next'. Because the future is sometimes what we have right now.

Think about it like this. In 1923, the first domestic refrigerator was launched in the US. And for the first time ever, people could use electricity to cool their food, instead of relying on daily delivery of blocks of ice. It was called the Frigidaire (great name BTW), and was actually quite a beautiful thing. 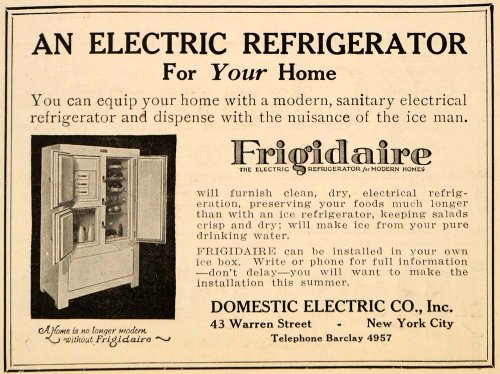 I imagine that, back then, people were also saying "This is amazing, but what's next? What comes after the refrigerator?"

Well, today, we know the answer to that. What came next was another refrigerator, and another, and yet another. Until every household had one.

True, some day we might invent the next stage of food. We might not need refrigerators at all, because we can just print whatever food we need with our 3D printers (or what will be known as the food replicators). And I can't wait for that to happen.

It's kind of the same when it comes to the tech and media world. What comes after mobile? Oh... that's simple. It's another mobile.

Again, true, in the future we might invent entirely new ways to communicate that will make the digital devices of today obsolete, but that's not really a trend today. Instead, the future of mobile is... more mobile.

This is an important thing to understand when you are predicting trends. Some trends make the present obsolete, while other trends cement them in place.

Take photography. What is the trend for people taking photos? Well, it's obvious. It's growing, and more and more people will take more and more photos. So it makes no sense to ask "what is next after photography", because this is the next thing.

But if you ask, what is next after the film camera? Well, you can come up with all kinds of interesting trends for that. Because film, as we know it, is dead and gone. What's next was first the digital camera and later the mobile camera, and maybe a wearable camera (although there is a form factor problem with this line of thinking).

This is a very important distinction.

There are two types of changes. One is the everyday change where the smaller bits change and become ever more optimized. These things change all the time, and there is always a 'next ting' waiting just around the corner. It's like fashion.

The other type of change is transformational. It's when, for instance, you move from the scarcity of print to the abundance of digital. What's after digital, you ask? Well... just more digital.

These changes were huge, and they quickly transformed the world. But, once in place, they tend to stick around for a very long time.

Some people say that wearables will make computers obsolete. And I agree. One day this might indeed happen. But it's not the kind wearables we see today. All the wearable devices we see today are based on the optimized form of change. They tweak how people behave, but they do not really change the behavior. They are not really transformative.

At least not from a media perspective. Not yet, at least. In the medical industry, the trend of wearables looks to be extremely transformative. It will completely transform the way our doctors and hospitals work and when we need them.

But as for where you are going to check your emails and read the latest headlines, wearables aren't transformative at all. They are just the latest fashion.

Keep this in mind when you plan for the future. Transformative changes are huge and requires a completely different approach to your market. And getting these right is critical to your success. Optimized changes are what keeps you on your toes, but they are not that important, nor do they really change much.