Why Governments Have No Say Over The Internet

Earlier this week, French President Nicolas Sarkozy held the first ever eG8. A world summit for the leaders of the internet. On one hand, I think it is great that the internet has finally reached a point where it is taken seriously. On the other hand, it also shows the danger governments pose.

Now people themselves can be a provider of news, and the same is happening with Governments because the internet.

Sarkozy said, "Democratic governments are the only legitimate representatives of the will of the people. To forget this is to take the risk of democratic chaos and hence anarchy."

I'm sorry Sarkozy, but you are wrong. There are *two* legitimate representatives of the will of the people. One is the Governments within the confines of a country, and the other are the people themselves. We, as in you and I, have a legitimate right to represent ourselves.

Let me put this into perspective.

If you are a US citizen and you travel to Canada, you have to abide by Canadian law as defined by the Canadian Government. It doesn't matter what US law happens to be. The very moment you leave the US, US law no longer applies.

It is the same here in Europe. I live in Denmark, but if I were to travel to England, I have to abide by English law. Meaning that I am required, by law, to drive on the wrong side of the road. It doesn't matter what the law says here in Denmark, because I'm not in Denmark.

Where does that leave the internet? Well, there is where the real clash happens, because the internet is not *in* a specific country. If your site is hosted via Rackspace or Amazon, it is effectively in the cloud. You do not know what country you are in. It is the same on Facebook or Google. They have server nodes all over the world. You never know which one you happen to be on.

If I am communicating with a person from Australia, which law applies? You can't say that I have to abide by Danish law, while the Australian has to abide by Australian Law. We are both in the cloud. You cannot apply two different rule sets to one conversation.

This is why we need a global law - and internet law. A law that spans across countries. Sarkozy also wants that.

But herein lies the other problem, which is that the Government has been elected to represent the interest of a country. Who is representing the internet?

The internet is global by default, and it will be more so in the future. We cannot have local Government trying to create their own rules outside their sphere of influence.

What we need is an Internet Goverment. A group of people, elected by the people of the earth, to represent the collective will of the internet.

We need to give every citizen of this planet two citizenship. One for the country they happen to live in, and one for the "Country of the Internet." 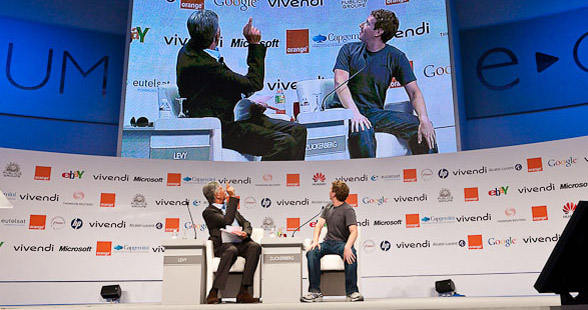 Sarkozy said, "The world you represent is not a parallel universe where legal and moral rules and more generally all the basic rules that govern society in democratic countries do not apply."

Does that mean that the internet should just be lawless and akin to the wild west? No, of course not. We need to regulate the internet, and we need it now. Criminals are currently roaming free, costing every citizen a huge amount of money every year.

We need an authentication act, making sure people cannot hide behind anonymity. Just as every citizen of the United States is required to have a social security number.

We need a nondiscrimination act, saying that it is illegal to discriminate against a certain group of people. Forcing e.g. the record industries to sell their products to a global audience, or when they make a deal with Spotify, that deal then has to cover the whole internet and not just a single country.

We need a commerce act, defining the right of people when they buy products online. And that it is illegal for any company to lie or mislead when promoting their products.

We need a child protection act, making it illegal to e.g. create apps for minors that trick them into buying products they just thought was options in a game.

We need a copyright act, so that companies cannot commercially exploit what people share. Like the recent case of Twitpic selling your photos to World Entertainment News Network.

The bill of right also has to include that we do not have the right to use our own rights to violate anyone else's rights.

What Sarkozy and all the other government leaders need to understand, is that the internet has taken away their monopoly to represent the will of the people. We are now global. Governments aren't.

If Sarkozy wants to regulate the internet, he first has to be elected "The Secretary-General of the Internet." I do not think Sarkozy is a bad guy. I think he means well. If he put himself up for election, I might actually vote for him. But as long as he represent the Government of France, he has no right to regulate the internet.

Catch up on what happened at the E-G8 summit.