Why the Nokia/Microsoft Deal is a Big Thing

Earlier today, Nokia announced that it would enter into a strategic partnership with Microsoft. Future Nokia phones will use the Windows Phone 7 platform, and bring some of its own technologies into the mix as well.

Why is that such a big deal? Well, let us put it into perceptive.

Nokia has been stuck like a deer caught in the headlights ever since Apple came out with the iPhone. As Nokia's CEO said a few days ago, their competitors are cranking out devices faster than 'the time that it takes us to polish a PowerPoint presentation.'

At the same time, Microsoft's new Phone 7 is actually quite good, but they have a hard time because it lacks scale. The Microsoft Phone platform is a worthy contender to both Apple and Android. And, coupled with the future potential of XBOX, it has the potential to be the phone platform for gamers.

Note: Although, Microsoft needs to embrace a multi-platform mobile XBOX strategy, instead of using it to leverage Phone 7.

Take a look at what happens when you mix the two. Nokia, the failing company with a huge market share Microsoft Phone 7, the new interesting platform that lacks an audience. 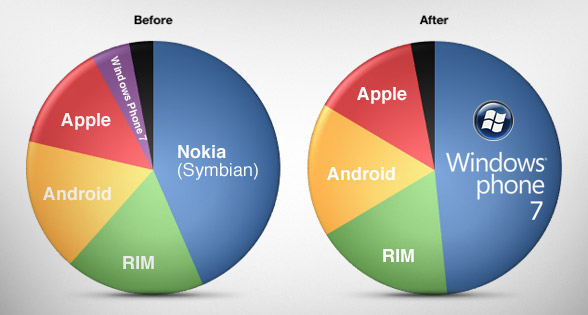 Obviously, every Nokia owner needs to switch to a Nokia Phone 7 for this to actually happen - which isn't entirely likely. People are already switching to either iPhones or Android.

To succeed, Nokia needs to bring out a really great Nokia Phone 7 within a very short time. They have to demonstrate that they can deliver on this new partnership, instead of just making another fancy Powerpoint.

Highlights from the Nokia/Microsoft strategic Partnership