2013 is looking to be exciting. But nobody ever said it would be easy.

For about a week, I have been trying to write an article about what brands and publishers should focus on in 2013, but I'm getting nowhere. It's not that I don't know what to write about (I do), and it's not that I can't write about it either (I have probably written 40 pages so far).

The problem is that many of the trends and patterns are in direct conflict with each other, and trying to mix all of that into one article results in a terrible mess of a story.

So I'm dropping the article, and instead I'm going to focus on each one of these trends in a separate article in the months ahead. This way I can write a much better story, make it much easier to understand, and have more room to include examples, ideas and tips that I wouldn't be able to bring if I just added it all in one.

But I don't want to leave you hanging, so here are the major points of 2013 that you should focus on:

The old media roles are merging into one.

The old roles of brands showcasing their products to the press in hopes that the press might write about them is being replaced by brands publishing their own stories. And that changes everything:

Here is one example from Jamie Oliver publishing a video story about his Wood Fire Oven. This is not advertising. This is a brand acting like a publisher. He is taking on the role of a journalist to promote his product.

This new media world is creating an extremely exciting hotbed of new needs and problems that must to be solved. As an example read, "RESET: Advertising Agencies in 2015".

On the publishing side, the challenge is how to operate in a world of direct connections. Every single media company today is design around the business model of being the gateway, the curator and the middleman that connects people ... i.e. to be the bringer of news. In 2013, that model is about to be replaced by its exact opposite.

The result of this is going to be fascinating!

As in real money earned! This trend has been in the works for several years, but it has now reached a critical level. 80% of CEOs no longer trust marketers (it was 70% last year), simply because marketing don't demonstrate what they do also results in real value.

Just see the click data from the AP/Samsung promotion.

In 2012, you could kind of get away with this because most CEOs still didn't have a clue what marketing did to their business. In 2013, you won't be able to do that any longer. ROI is a macro trend that cannot be ignored. And the same is true for newspapers trying to sell advertising. You have to demonstrate that it actually works.

One example is: "At Toronto Star, partnerships lead to success with Nissan campaign". When you read that article you hear about all the fancy things they did, and the result?

The result was award-winning. The launch campaign for the 2013 Nissan Altima won Best in Show in Canada's 2012 Media Innovation Awards this past November. It was full of first-evers and took innovative advertising to a whole new level.

But did Nissan sell more cars? Did they actually get a real result? We have no idea.

This simply isn't good enough. Who gives a rat's ass if an advertising agency or a newspaper won an industry reward? That is not a result. It doesn't help Nissan sell more cars.

It is exactly because of behavior like this that most CEOs no longer trust advertisers (or advertising in newspapers).

This is closely linked to the trend of ROI. We all saw how Nate Silver predicted the US election, and how Fox news had to slap their own pundits when their data team concluded Obama would win.

But that this just a tiny part of a gigantic trend of data analysis. In 2012, we started to see what data could do (as our tools reached a point where we could process enough data to provide almost accurate predictions). In 2013, this will be even bigger... and far more powerful.

The trend is actually not really about the data, but rather the battle between the pundits and the analysts. In the past, the pundits had all the power. But now the analysts have enough data to simply deflate them before they even get started.

See "The Pundits Versus The Analysts".

This trend is completely changing how things are done. How we form our decisions. How we build our strategies. How we evaluate our options. And how we determine what to focus on.

2013 is also going to have some bad elements:

Social media has grown up.

The experiment phase is over and the networks are all realigning their focus on how to make money. Startups hoping to create yet another free social service is going to have a really hard time doing so.

Social media is no longer a trend. But that doesn't mean social media is any less important than before. It just means that playtime is over.

2013 is going to be a slow year for social media experiments for most people. And most of it will be focused on optimizing, rather than experimenting.

A trend that is becoming ever more dominant. Just look at how people reacted to Instagram, but that is just one of hundreds of examples.

The old media companies will continue to shoot themselves in the their feet, and continue to lobby the Government for legislation that punishes or harms the new world.

Just look at how the newspaper association of Ireland lobbied the Government and is now demanding 300 EUR if people link to them, or how newspapers in Europe lobby that Google should pay for links. Or how newspapers lobby the Government to give print media a lot of money in Government subsidization at the expense of net media (often using ridicules claims that the new media is stealing their stories... despite the fact the legacy media is doing the same thing every single day).

The trend we are seeing now in the media industry is exactly the same trend that destroyed the music industry. The big players became so obsessed with protecting the old that they used their industry associations to focus exclusively on fighting anything that just remotely looked like a new thing.

Think the music industry and RIAA ... and now think Irish newspapers and NNI. It's exactly the same concept (and it's happening in many other countries as well).

Both a good trend and a sad trend is what's happening with paywalls. On one hand, it's the solution to many problems, and we are going to see brilliant cases and experiments that will both inspire and delight us.

But, putting up a paywall will also hasten the demise of those newspapers who never had a product to begin with. This is the connected world, and if your only reason for existing is based on old people who doesn't know how to use the internet, your problems won't be solved with a paywall.

That said, the trend of paying for content is going to continue to grow, as it has been growing for the past several years. That is wonderful news for anyone who position themselves as the creators of news.

This trend has been growing ever since the 1800s, but in the 1980s, it started to seriously disrupt our world ... and we are getting precariously close to it's breaking point.

Look at these two graphs:

The first one illustrate the percent of our income we spend on non-necessities. As you can see, in the 1980s, the curve stopped growing. 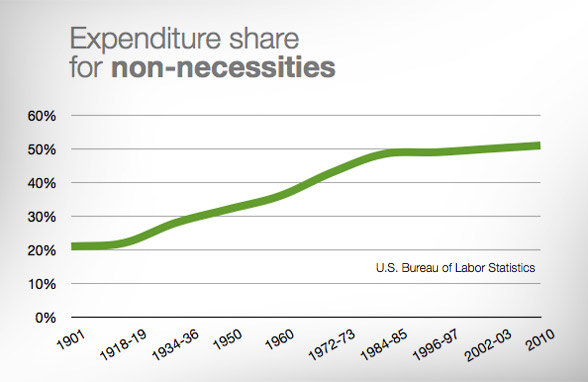 And the second graph illustrates how much we are spending on non-necessities. Again, the curve has stopped growing (but despite what everyone believes, it hasn't dropped that much either during the financial crisis). 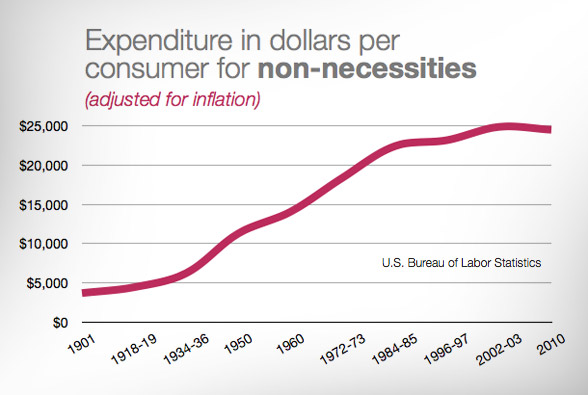 This wouldn't be a problem until we realize what we do with that money. In the past we only bought a few pairs of clothes. We only had one (very cheap) landline phone at home, one TV, one or two newspapers, and 3 magazines. With that there was plenty of money left for other things.

Today, we buy new clothes all the time. Instead of just one phone, every member of the household has their own smartphone. We have several TVs around the house. We own a tablet, an XBOX, and for that we also buy tons of apps and games.

In short, the amount of things we buy has exploded ...but we still only have the same amount of money to spend.

This is the trend of abundance (and the real financial crisis), and it's making it a lot harder every year to stand out. It's no longer just a question of having an interesting product for people to buy. You have to outcompete all the other things people buy as well.

What would you rather have?

This is the real challenge the younger generation is faced with today. And since random general purpose news is freely available somewhere else, you don't have to be a rocket scientist to guess which choice they make.

This is why I keep saying you have to be the creator. News as a commodity isn't an option anymore.

All in all, 2013 is looking to be an exciting year. But nobody ever said it would be easy.