Everyone Will Subscribe to Media in the Future. No, Really!

One of the things that is going to come up again and again over the next couple of years is the question of how many people are going to subscribe to all these paywalls and monetization plans that publishers are setting up?

For instance, in a tweet from the News Media Alliance, they asked this question:

Subscriptions make sense. But how many will consumers pay for?

And in another tweet from Reuters Institute, they wrote this:

Over half (52%) of publishers expect subscription & membership to be main revenue focus in 2019, compared to 27% for display advertising - but are enough people willing to pay for news?

The answer to this is extremely simple, because every consumer will pay, but nobody will pay for everything.

In other words, in the future, pretty much every household will in some form or another pay for one or more specific media sites, but that is all that they will pay for.

In the past, we lived in a world where people were consuming and paying for just one or two newspapers. As such almost 100% of your audience were also paying customers.

This meant that the traffic that publishers got and the conversions were intricately linked.

So, in the future people will still only pick one or two sites to pay for, but they will also visit hundreds of different sites, often without even realizing it.

The result is that, per publication, only something like 2% of your audience pays, even though from the public's perspective, everyone pays for something.

The fallacy here is that publishers think that all of their millions of random clicks are actually from interested people. They are not.

But let me illustrate this in a more visual way, and also show some of the problems we will be faced with in the future.

So, to seriously simplify things, imagine that it's the 1980s, and you have 3 publications and 10 people, each spending $100/year on media.

The result was a media market that looked like this, where each publication existed within a separate market and with very little overlap.

Notice here that while each publication might have a different audience size, of the people who come to each one, 100% of them also pays.

The problem is that, in the digital world, this model has now been replaced by the internet, where people are likely to come across content from all publications, either by visiting them directly, or just randomly stumbling across a link via social channels or other forms of exposure.

The result is a new world that looks like this: 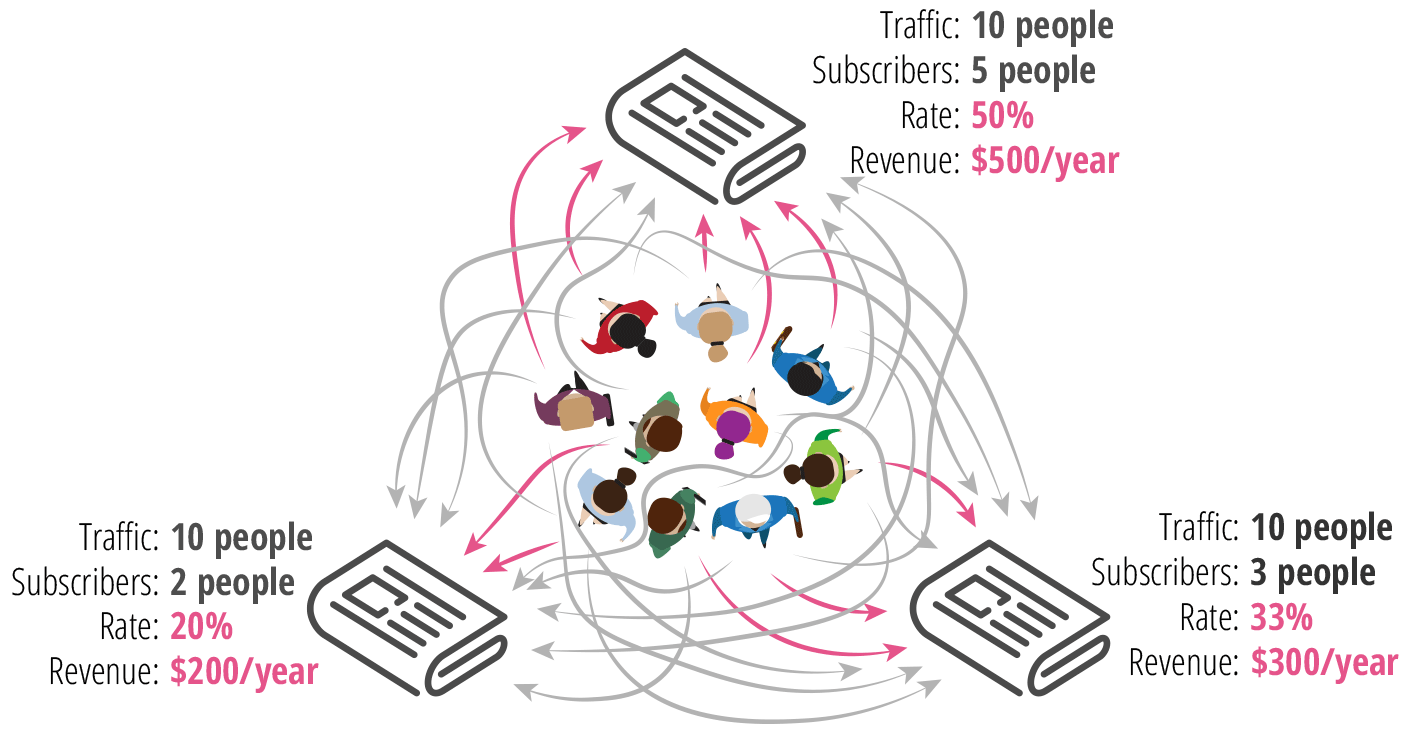 This is how people behave online. Instead of having each publication exist in what is essentially a vacuum, people browse around, mostly without ever thinking about it.

So what is happening today is that all the publishers suddenly have an audience of all these 10 people, but this hasn't changed what people choose to subscribe to. While these 10 people are now being exposed to (and occasionally read content from) everywhere, they are still only picking and paying for just one of them.

This is also the point where people start to wonder about the Spotify/Netflix for News model. If all these 10 people are visiting all three publishers, wouldn't it be better if people could just pay once and get access to all of them, instead of asking them to pick just one?

At the surface this makes a lot of sense, but I have written about why this doesn't work in several previous articles, like "Forget Spotify for News. Let's Fix the Real Problem".

But let me simplify it.

What the Spotify/Netflix model does is eliminate the need to choose, which is beneficial if people consume a lot of similar content that isn't worth paying for individually.

For music, it works perfectly, because asking people to pay for each individual album is simply not valuable enough, and it's also way too cumbersome. Similarly, you don't want to ask to pay for individual songs (like Apple once thought), because... well... that's just even worse!

So, if we apply this to the media, we end up with this model.

All ten people now freely visit all three publishers, and they just share the revenue. It's a very simple model, and we no longer have to think about making a choice or calculating conversion rates.

The problem is that this is not what the media world is like. Because, in today's world, we no longer just have three newspapers, we have thousands of media things to see.

We can suddenly read and subscribe to newspapers from all over the world. We can choose to pay for and support our favorite YouTubers or Twitch players via Patreon or Twitch subscriptions. We can buy membership plans from bloggers, spend our money on special guides that people make, and hundreds of other things.

In other words, this is what we have today: 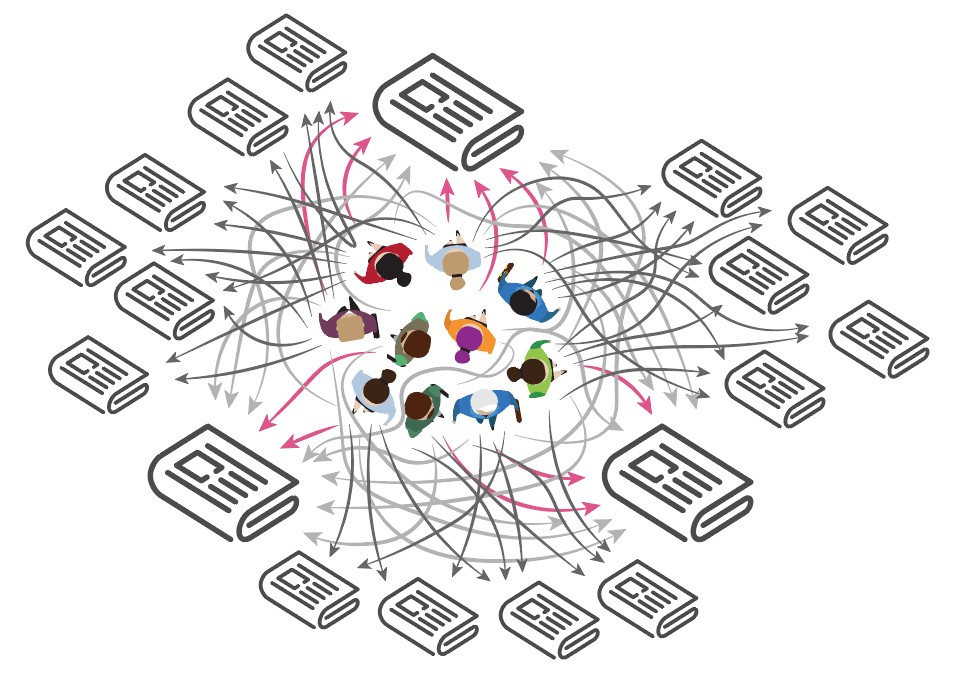 And what happens here is that these 10 people are now spreading their consumption out to far more channels than ever before, but they are still just paying the same amount of money for it.

The result, after the revenue split, is that each publisher is now only making 1/18th of what they made before, and that's just for this simple example. Imagine that you had 100 times the number of publishers. This might be enough for a YouTuber to make a living, but for a big publisher like a newspaper or a magazine, it will never really work.

And this is the problem with the Spotify/Netflix model. It works for music because it's a contained market, but it doesn't work for anything else. It doesn't scale, because as more and more publishers are included, the less money everyone makes.

It doesn't even work on Netflix. If Netflix truly had every single movie and TV show from every channel, and had to share their revenue with all of them, there wouldn't be enough money left over for Netflix to do original programming.

The reason why Netflix can afford to make Stranger Things, Black Mirror, and many other original shows is exactly because it is limiting what else it has to offer (and pay for).

There is no market for 'one price for everything'. It just doesn't work. And because of this, we are back to a world of picking what you care about the most. 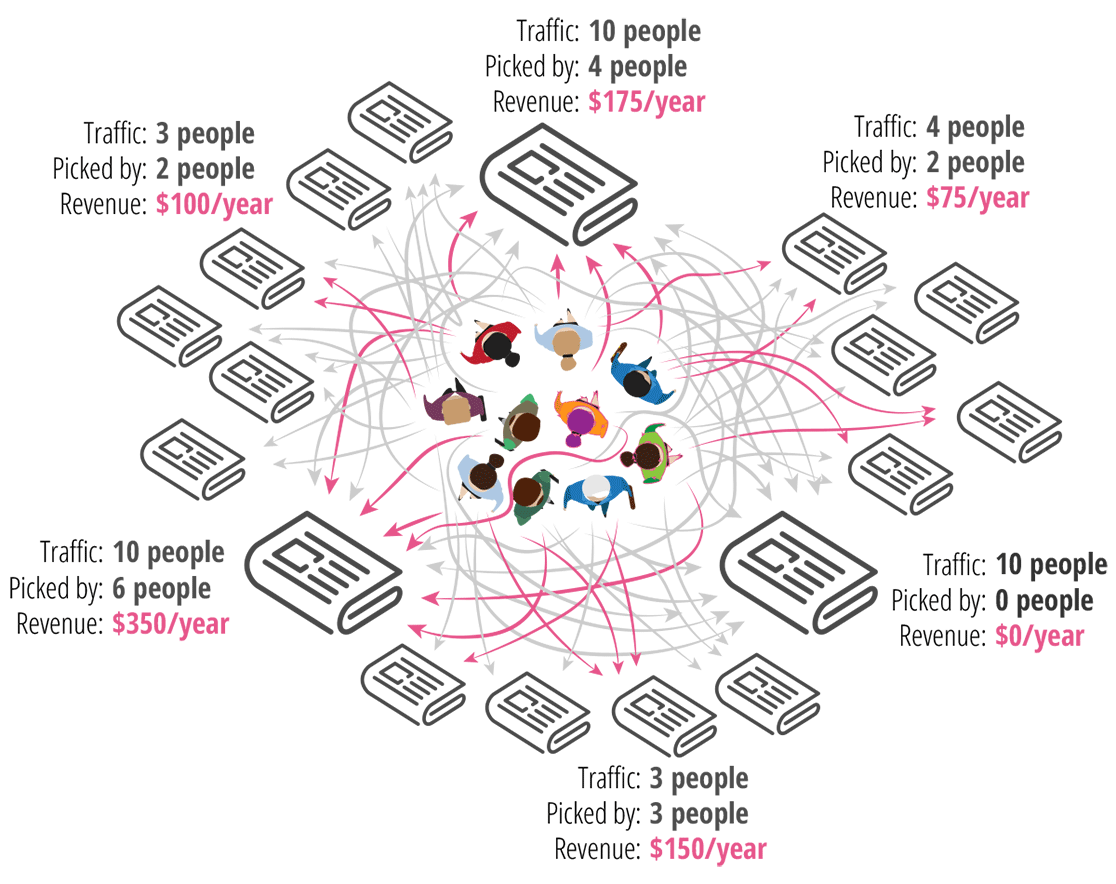 Here we have the same ten people, in a much more competitive market with far more publishers, creators, and channels competing for the same overall amount of money people are willing to pay.

And as you can see, each person is picking 1-3 different things they care about, while also visiting all (or most of) the other sites.

The key thing to remember here is that each individual is paying for something.

If we go in and look at a single person, we see that in this case, the person has picked two things that they are paying for, and is also regularly choosing to visit five other publishers ... who they don't feel are worth paying for. 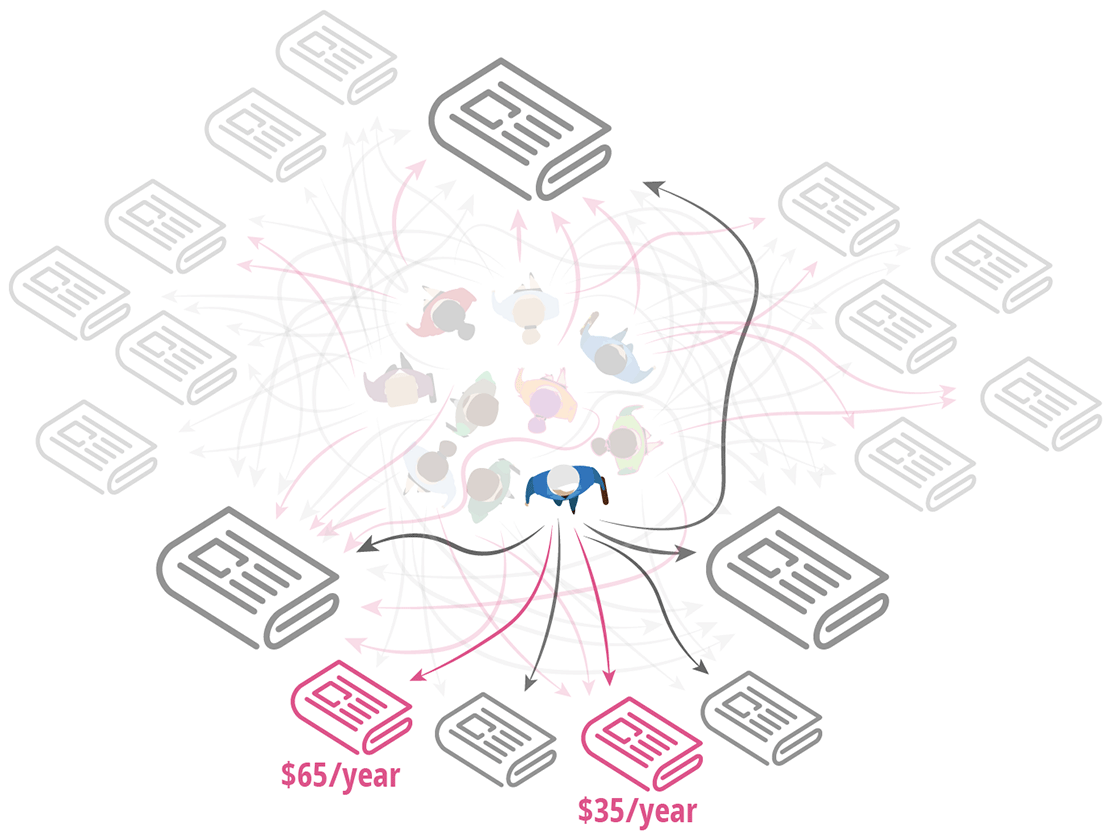 But this is just what this person is picking. On top of all this, this person is most likely visiting hundreds of other sites without ever realizing or even remembering it. Like when they come across a link to something on Twitter. This person might click on it and even read the article, but if you ask them 5 minutes later what site it was on, they don't know ... they might not even remember that they read that specific article. They just remember what was in it.

So when you ask:

Over half (52%) of publishers expect subscription & membership to be main revenue focus in 2019, compared to 27% for display advertising - but are enough people willing to pay for news?

Yes they are. They are all willing to pay and pick something. But that something might not be you, even though you still have what appears to be a ton of traffic.

This is how you should think about the future of media, and this is the reality of the world we now have.

Forget about measuring conversion rates based on how many uniques you have. That model was based on the old world where the people who came to you were also all potential customers. This is a meaningless way to measure this today.

Instead, focus on and measure how you are getting picked. But also, realize that different people have different needs, so just creating one package with one price for everyone probably won't work either. Be better at creating something that is easier for people to pick for different situations, different needs, and different moments.

Give people something worth choosing.